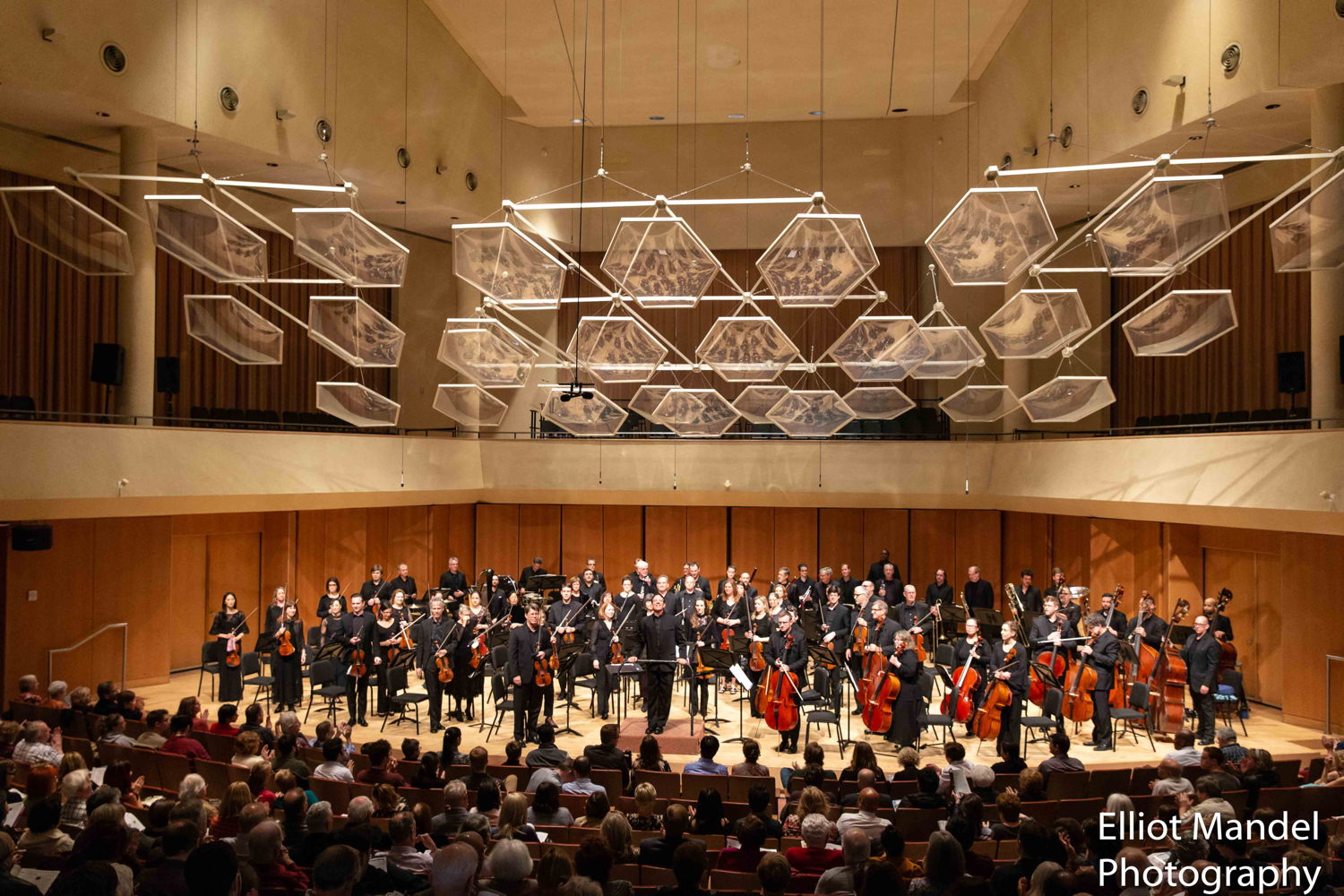 The audience waited in silence for what must have been thirty seconds as the final notes hung in the air like a memory. Some leaned forward, hoping for more, watching closely as Maestro Scott Speck gently lowered his baton. Others sat back and let the beauty of the final lament in Tchaikovsky’s 6th Symphony wash over them. I was in the first group. The woman sitting next to me was in the second. “My god, that was extraordinary,” she said in a whisper, as the audience rose for the ovation.

To celebrate its 30th anniversary, the Chicago Philharmonic–a world-class ensemble that has built its reputation as one of the city’s great cultural institutions–chose Life as the theme for the opening performance on Sunday afternoon in the Pick-Staiger Concert Hall at Northwestern University. With this ambitious theme, the Philharmonic and Principal Conductor Scott Speck set out to once again achieve what has become their signature connection with the audience–an enduring generosity of spirit that welcomes young people and newcomers, as well as long-time fans, aspiring musicians, and hopeful composers, to join a community of artists brimming with both breathtaking talent and an unmistakably joyful love of classical music.

The result? The Chicago Philharmonic’s four-part performance more than rose to the challenge with a perfect blend of youthful energy, playful intensity, and technical mastery in an exploration of Life that proved so extraordinary that it left the audience utterly silent. Throughout each piece, time and again, Speck and the Philharmonic demonstrated moments of insight, genuine care, perseverance, and the type of ecstasy that can only be found in listening to an orchestra at the top of its game. Put simply, it was masterful.

The first piece of the afternoon, Young Voices, was selected as the winner of the Philharmonic’s inaugural Fanfare Competition. Its composer, Harrison Collins, a 19-year-old student at Illinois State, described his fanfare as, “A portrait of youthful determination and celebration of the youngest generation of American adults.” From the simple three-note opening theme that became the foundation for the melody, the fanfare lept into triumphant and discordant action, an exuberant and often exhilaratingly chaotic progression that served as a commentary on how our unsettled times have been met with youthful determination.

Masquerade, the afternoon’s second piece–composed by Anna Clyne as an homage to the popular promenades of the 19th century–proved to be a study on rising and falling. From its ominous and almost brooding opening, Clyne weaved together distinct moments that conjured images of a cast of characters on the walk. By turns English folk music and placid melody, the piece, brilliantly conveyed by Speck and the Philharmonic, gave a sense of repeated conflict and resolution.

Following the mystery and allusions of an 18th-century promenade, the third piece of the afternoon returned us to the genuine drama of the moment, as Jeremy Moeller demonstrated his brilliant control of dynamics with a piece that pushed both him and his trombone to their limits. More than ably supported by the orchestra–with an especially beautiful performance by the woodwinds–Moeller’s interpretation of Ferdinand David’s Concertino for Trombone and Orchestra pushed the envelope with moments of strength and vigor followed by deft precision. The result proved to be something close to a tour de force performance, made even more impressive by the sheer physical exertion and focus required.

Following the intermission, Speck introduced Tchaikovsky’s Sixth Symphony. “For a concert called Life,” he explained, “we couldn’t end with anything other than Tchaikovsky’s Pathetique.”  Conducted by the composer in a world premiere just nine days before his death–and considered by some to be a suicide note–the path taken by Tchaikovsky’s final work bears a strong resemblance to a statement he made about his unfinished Symphony in E-flat: “The ultimate essence of the symphony is Life. The first part – all impulse, passion, confidence, thirst for activity… Second part: love. Third: disappointments. Fourth ends dying away…”

Speck and the Philharmonic captured Tchaikovsky’s melancholy from the opening Adagio, which began languidly, as though moving through a fog. The entrance of the violins soon brought the movement to life, with the intensity that powered the allegro fueled by the low brass. Throughout the movement, the strings marked the passage of time and the winds told their story through the darkness, with Sergey Gutorov’s beautiful clarinet speaking to us from beyond with the voice of tender nostalgia. But just when we had been lulled into our memories, again came the strings, violins faster now, building with anxiety, as though greatness was within sight but always just out of reach. And when we had finally given up, here, again, came the lonely clarinet in the distance, like a sweet memory, followed by a gorgeous meditation from the winds as the strings marked the time.

With the Allegro con Grazia, a five-four waltz that served as a welcome respite from the first movement’s ambition and anxiety, flutist Thomas Robertello’s elegant solos mixed with the subtle footsteps and heartbeats of the violins and winds, reminiscent of a sweeter, simpler time. But it was not to last.

The third movement began with a wind sprint–a vibrant, ambitious, digression-free, march to greatness. Focused, and all the while loud and close. Then louder and even closer, with the unmistakable drive for greatness now just a breath away. Rising, faster, and faster, and finally fulfilled… and that’s where it should have ended.

In his introduction, Speck mentioned that often audiences will applaud at the end of the third movement. And so we did, as well we should–it was triumphant, a brilliant piece, and it had been beautifully performed. “Oh that’s gorgeous,” said the woman sitting next to me. But, of course in Life, just as in life… the moment of greatest achievement is not the end.

As the applause died down, the Adagio lamentoso began. Now older and perhaps wiser, the music seemed to ask… Now that I have this… Now that I’ve done this… Now that I know this… What do I do with it? And was it worth it? And now, for a little while, the strings told the story and the winds marked the time. But as Tchaikovsky’s lament so beautifully brought to life by Speck and the Philharmonic reminds us, time is slipping away. What’s left is all there is. And as the memories washed over us in waves, the basses told the story of the last heartbeats, and no-one marked the time.

After the performance, I stepped out of the Pick-Staiger Concert Hall into a late afternoon alive with a strange mix of those who had just witnessed a masterpiece and college students enjoying the last hours of a perfect Sunday on the campus of Northwestern University.

Having been transported, I wasn’t ready to go home, so I made my way back into the world with a walk along the lakeshore. There, with the walkers, joggers, and couples holding hands, I saw Harrison Collins and his girlfriend trying to take a selfie with the Chicago skyline in the background. He was elated, young and in love, thrilled by the moment, a composer with plenty of time ahead to make beautiful music. I congratulated him on his world premiere and helped the couple take their photo. Quick note–somewhere on the phone of an aspiring composer, you can find the picture I took of the two happiest people in the world at that moment, just after 5 pm on a late Sunday afternoon. Then they went their way and I went mine, down the path a little farther, thinking about life and Tchaikovsky.

At a bend in the path not too far from Ryan Field, I sat on one of the few unpainted rocks on the shoreline and looked out over the lake, north towards home. I leaned forward and listened one last time for the notes that never came, dreaming of Tchaikovsky at his final premiere, just days before his death, with masterpieces like Swan Lake and the 1812 Overture behind him, his genius both realized and unrealized, lowering his baton one last time in the silence.

The Chicago Philharmonic’s second performance of the season on November 17th at 3 pm will feature an all-Beethoven program including Reunion: Beethoven’s Third Symphony at the North Shore Center for the Performing Arts in Skokie at 9501 Skokie Blvd, Skokie, IL 60077. Tickets and info are available at.chicagophilharmonic.org/reunion-beethoven-3/. Find more information about current plays in our front page recs and at theatreinchicago.com.