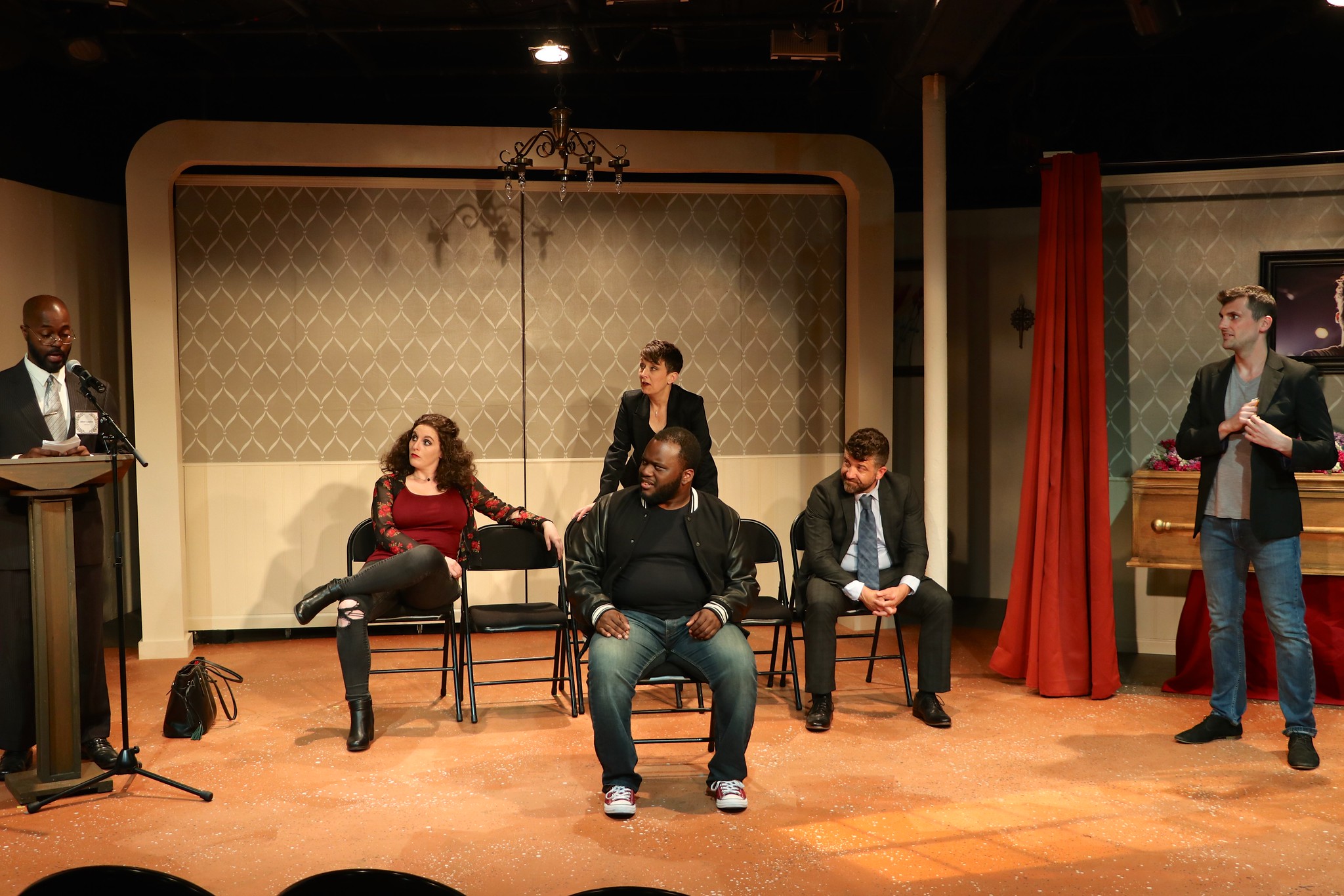 So here is the premise for Harry Wood’s Roast, now playing at Greenhouse Theater Center: a stand-up comic kills himself and leaves instructions that four of his friends and colleagues, along with his sister and estranged father, should (instead of a funeral) hold a posthumous roast for him, like the ones you can see on Comedy Central where everyone makes jokes about the person who is the roast’s object. In normal roasts, of course, whatever fun you have with the roastee is fed right back to you as they take the mic and get you back. When the roastee is lying in a coffin, though, the rules are different.

You should always grant authors their premise, give it a chance to become what they want it to be. And I shall do so, especially since this one, on its surface, has considerable potential. But I’m not going to be as kind to Sam, the comic in that coffin. What exactly would propel a man to kill himself (bad enough already) and then to top that off by putting his friends and family in such an awkward, obviously no-win situation as this? Could he really believe that such an affair would work? That his friends, though comics all, could just put aside their grief and tell jokes about his life? And that his sister, who loved him (and who is not a comic) could do the same? And to what purpose would he invite a father who has not been any part of his life for a decade? Oh and by the way, um, the event is being live-streamed.

A funeral roast is not unheard-of. There is a reddit channel dedicated to the concept as well as a twitter handle (@funeralroast) and even a podcast. And goodness knows that funerals are always better if someone speaking has the ability to make those in attendance laugh and enjoy good memories of the deceased’s idiosyncrasies. (Tears, of course, take care of themselves at times like these.) But Sam’s idea here is rife with difficulties, not the least of which is that his sister Alyssa (Kyra Jones) is also completely estranged from and detests Daddy Dearest (John Miraglia). Given all of that, and the fact that the father has not been present for anything for his son in so long, why would he even show up for this bizarrely convoluted family reunion?

But he does show up, as do the rest of them, and Wood adds to them a funeral director/master of ceremonies (Roy Pugh) who is stuffier and more straightlaced than Captain Holt on “Brooklyn 99” and who by his own admission has never in his life told a joke. His utter incompetence in such matters becomes a running gag in the play. The four comedians, meanwhile, struggle with being funny in the face of their friend’s suicide, as one might expect. The comics (Alison Plott, Reginald Hemphill, Kelli Walker and Mike Newquist) for the most part make attempts at joking around but are unable to sustain the emotional distance required to do so, while the sullen Alyssa and the oddly detached Edward await their turns at the mic and the confrontation that feels pretty much inevitable from the start.

The actors playing Sam’s friends are all very strong here as they fight through the competing feelings that any funeral can bring out and this one doubles down on. They also have to work with dialogue that, while fairly impressive for a first script, could have been more natural a considerable amount of the time. Each of them, though, by virtue of the play’s structure, gets time to be in the spotlight, and they all make the most of it. Pugh’s character may be one-note, but he plays that note to the hilt. Still, he wears out his welcome through repetition. Of course, it is Jones and Miraglia, as the family, who have the furthest to travel here. Their roles are very different (Edward is almost completely internalized and Alyssa wants a battle from the start) but their emotions are both absolutely raw: the sister seething with anger and her father trying to deal with his shame.

Director Derek Bertelson does what he can to keep the play moving forward, but he is hampered both by a script that insists on jumping back and forth in time and location and by scenic designer Sydney Achler’s solution to this complexity. Wood’s structure is episodic, and he alternates between each character’s moment at the mic and the room in which they all gathered before the roast. To effect these changes, the cast has to move six folding chairs, unfold a wall, move the podium and mic, close the curtains in front of the coffin, and move a table. It’s time-consuming and awkward, and a less cumbersome set that combined the two locations instead of keeping them separate might have made it easier. One nice touch, though: a running clock on the wall of the ready room that shows how much time remains before the event is to begin. And the nook with the coffin does look nice.

The bottom line: good acting and characterizations, but an uneven script and several extremely clunky set changes get in the way of real emotion.

Roast is presented by The Comrades at the Greenhouse Theater Center, 2257 N. Lincoln Ave, Chicago through Aug 18. Check the website for specific dates, times, and tickets. Find more information about current plays in our front page recs and attheatreinchicago.com.