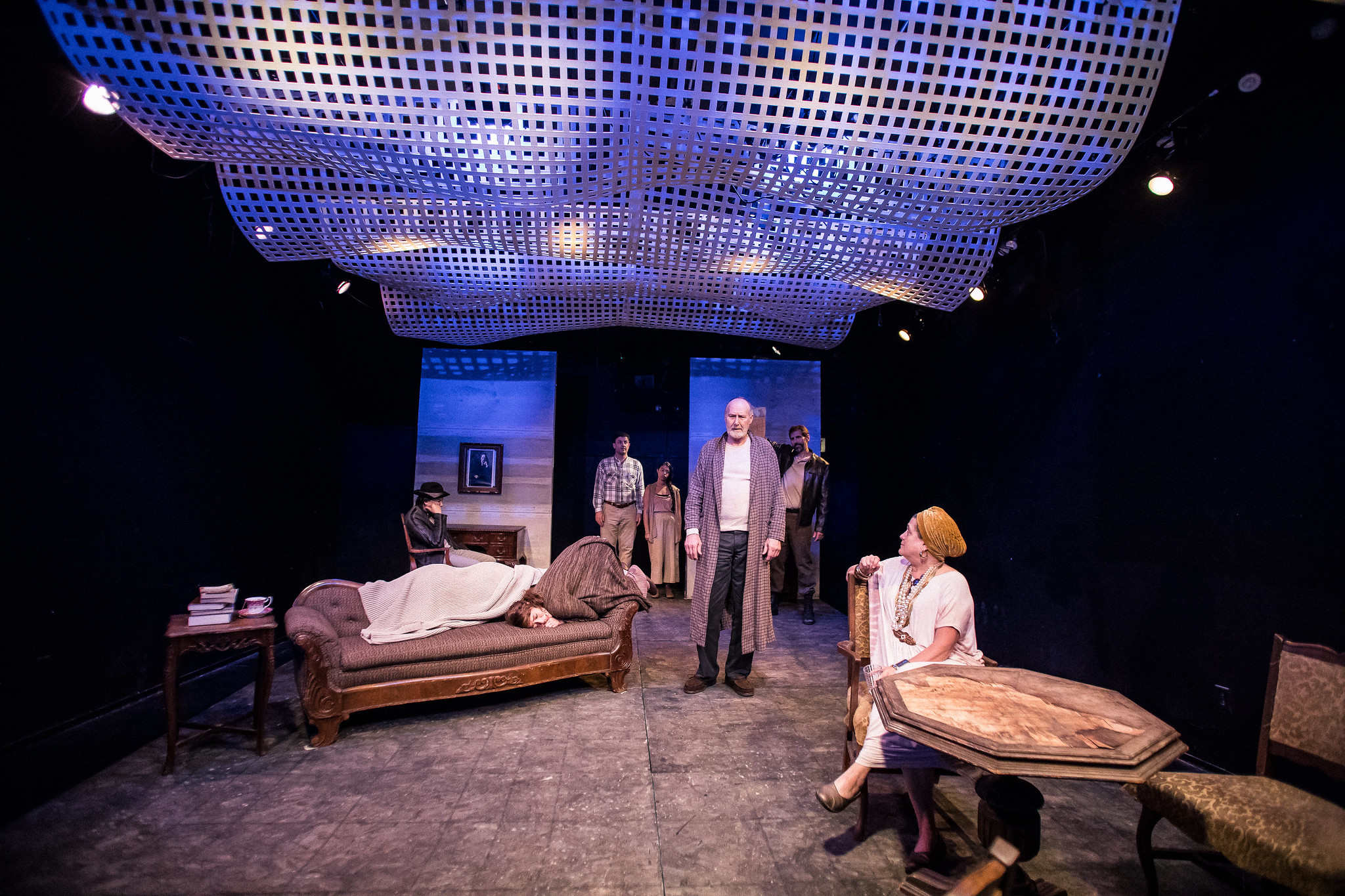 By now, there are enough books and plays depicting dystopian futures that it would almost be more outlandish to imagine a future in which the world just goes on as it is. Of course, fear of what may become of the human race and the planet on which we live is completely justified by trends that are easily observable today from the warming of the planet to the tendency to isolate ourselves behind little screens instead of, I don’t know, actually interacting with each other. The Artistic Home’s latest production, Jason Hedrick’s Vanya on the Plains, takes a look at one such dark vision of where we are heading in an absurdist tragicomedy that has many good elements but, in this production anyway, lacks cohesive focus.

Director Kayla Adams, whose 2018 How I Learned to Drive was beyond excellent, has moments (especially in the much better second act) in which she really shines, but does not quite know what to do with the quieter and more sedate Act One in which Hedrick postulates a future when human beings are all on government-issued medication and interact as little as possible with each other except in virtual space, which is now hardwired into their brains. In the real world, which has become too hot and too wild, they are lethargic and laconic, conditions enforced by police who don’t take well to activity. Everything is so disconnected that a 79-year-old man named Elijah (an excellent performance by Frank Nall) conceives of the idea of staging a play (Uncle Vanya, of course) within his family—who do not even have a clue what a play is—just to get them talking with each other again.

It’s a conceit both farcical and brilliant. Adams’ take on it, unfortunately, is as slow and dull as these people’s lives. From the lengthy opening scene before there is any dialogue, she seems to want us to experience this future as if we were among them. It’s not a bad intention in theory, but in practice it has the result of utterly burying the playwright’s sense of humor, without which this first act is difficult to penetrate. I found myself over and over again hearing lines that, it seemed, might have elicited laughter in the audience had they been spoken or directed in a different way, and without that laughter there is nothing at all to justify absurdity.

Adams finds her way in the far less subtle second act, which appears to have received the bulk of her attention. Having created these characters and this world, Hedrick immerses us in the endless rehearsals of the play, during which the family members actually begin to enjoy themselves with many variations on the lines and characters. The director’s creativity comes alive here, and we have a second act that is every bit as much fun as the first act wasn’t. The audience members who left at intermission (and there were a few) missed what was, by far, the best part of the evening.

Onstage, the show is anchored by the performances of Nall and Kathy Scambiatterra, who plays Gayle, a former film star who now spends all of her days drinking vodka while dressed in what appears to be a 40s movie costume. The acerbic Gayle is pretty much the opposite of the quiet, contemplative Elijah. While he sits back and imagines a way to better his family’s lives, she sits in harsh judgment of all of them, including him. Both actors breathe honest life into what might have been one-dimensional creations in much the same way as the acting of Uncle Vanya adds depth and variety to what has hitherto been a repetitive, empty existence for this family.

Katherine Schwartz plays Anka, Elijah’s daughter who these days spends all of her life having the same conversation again and again with the imagined ghost of her dead husband. Ariana Lopez plays her daughter Sophia, beloved by her grandfather, who can’t stand the way she constantly locks herself into virtual space. (She even has a girlfriend there whom she has never met in real life, played later in a showy turn by Brookelyn Hebert.) Mark Pracht plays Carl, a nearly catatonic man who is Anka’s current sex partner when she isn’t reliving that long-ago conversation. The other member of the family is Elijah’s grandson, Nicholas, played by Benjamin Zarbock, who finds many ways to have fun with the role.

Elijah’s plan to have them put on Vanya seems silly (not to mention quixotic) at first, and Gayle scoffs loudly at it, but it does have the effect he wants it to have: it unlocks their minds from virtual space and reconnects them as living human beings. The difference between their lives in Act One and their lives in Act Two is night and day, like the difference in energy between the acts. It is possible to portray empty, meaningless lives and still make them fun to watch (witness any good production of Waiting For Godot) but Adams misses opportunity after opportunity in Act One. If she had just done something that granted the audience permission to laugh, that instilled humor as an expectation, that act might have worked as well as the second act does. As it is, though, not even the frequent brief character monologues scattered through it like little treasures can stop it from being slow and tedious.

These monologues are like momentary little sparks allowing us to see that these zombielike characters do actually have life within them. Even in these moments, though, humor is hard to come by though the lines suggest it is present. Act Two, which contains (and needs) far fewer of them, finally allows us to laugh. When we do, we discover the rich texture of Hedrick’s play and walk away far more satisfied than we were at intermission.

Vanya on the Plains is now playing at The Artistic Home, 1376 W. Grand Ave, Chicago through Oct 27. Check the website for specific dates, times, and tickets. Find more information about current plays in our front page recs and at theatreinchicago.com.