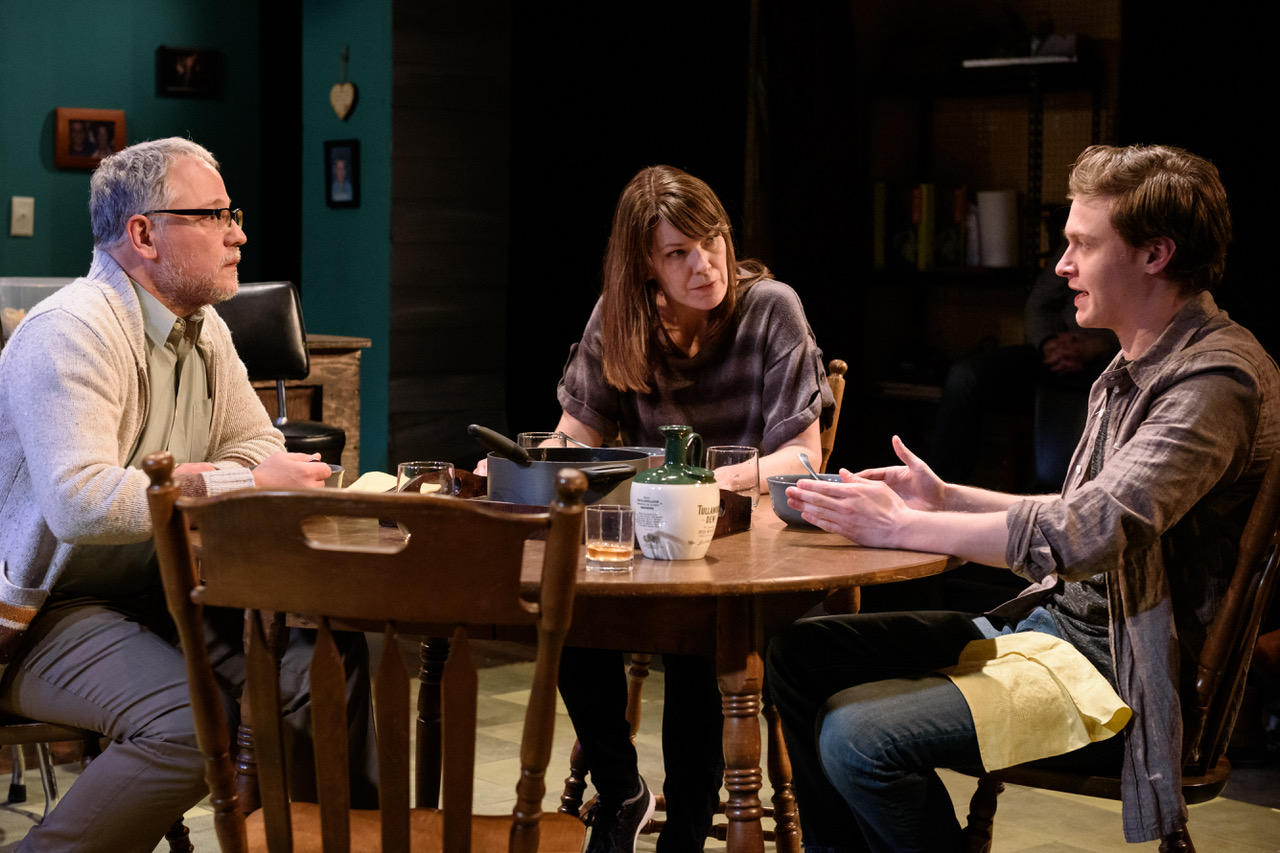 Shannon O’Neill’s May the Road Rise Up, now playing at The Factory Theater, is a breath of fresh air. Not only is it an Irish drama set in America (the Irish part is the family’s heritage) and full of real humor, but no one dies. The only death occurred many years before the setting of the play, and not dealing properly with it has affected many lives in this little town. It is a story about how we do or do not handle death and a story about starting over again, and it is full of life.

The story revolves around 20-something Michael (Vic Kuligoski), who (having left home following high school) decides to return for his grandfather’s 70th birthday. He has spent the intervening years bumming around New York trying to forget a troubled past and make it as a musician. Arriving home, he has to deal with the ghosts that haunt him as well as his interrupted relationships with his mother, his grandfather and his friends.

It’s those friends who help make this a very different kind of play. Rosie (Bob Pantalone) is a former high school football player who is now in a Master’s program (“MBA is the new BA”). Sam (Josh Cervantes) is the Good Kid staying at home to help his father’s hardware store to become more successful, while writing award-winning stories on the side. And Ruby (Julia Rowley), Michael’s one-time love interest, is another college student who has been missing him. It isn’t easy to dive back into friendships long on hold, but it is this element of the play that provides a dynamic that is both funny and energetic, and O’Neill puts it right in the foreground.

Michael’s family life takes more effort to rekindle. His grandfather Danny (Patrick Blashill) is an old-school Irish boxer who has a hard time dealing with the fact that his grandson left home for so long without regular calls to his mother, and that mother, Patty (Loretta Rezos), doesn’t quite know how to deal with the prodigal son. (Another wonderful and atypical aspect of this play: Patty has her own life outside of the family. She’s a nurse in a hospital who has been having a quiet affair with one of the surgeons (Scot West) for a long time, though she has not introduced him to her father.

Other cast members include Zach Bloomfield and Maggie Cain as friends of Danny and Ron Quade as a drunken, broken man who has suffered his own losses. Director Spenser Davis helps these actors to paint each of these people with verisimilitude and grace while keeping the play moving at a fast pace. (It is only ninety minutes long.) There are some very large group scenes involving just about everyone on the small Factory stage, including that birthday party, and Davis is brilliant at keeping focus where it ought to be.

Davis also helps the family unit of Danny, Patty and Michael to play very realistically. This is a family that has known grief and it has affected them extremely, but they still love each other and support each other. It would be easy to overlook either side of that equation, but Davis doesn’t allow it. And the three actors are exceptional in their good moments together as well as the difficult ones. Kuligoski is a great brooder, but he also has a smile that changes his whole appearance and knows when to use it. Rezos is excellent as a woman trying to balance her current life against a tragic past. And Blashill has a couple of the best moments in the play as he remembers that family always comes first.

Of the friends, all of whom are strong, it is Rowley who stands out as the former (and future?) love interest for Michael. She is genuine and open, and her character is willing to chastise him when he needs it and provide a shoulder to lean on when he doesn’t. The same thing can be said about the male friends too, and Pantalone’s “jock” entrances are a hoot. This group is there for Michael despite the fact that he vanished from their lives, but O’Neill is careful not to make it too easy for him. He has to earn his way back into their good graces.

Evan Frank’s set is clever enough to be a kitchen, a bar, a hardware store, and even an automobile without any need to move things around (another reason the play moves so briskly). Lit by David Goodman-Edberg, it allows scenes to flow easily from one to the next. And sound designer Tony Ingram’s work is subtle yet perfect as he conjures the bar or the roof of a hospital with the appropriate ambient sounds.

May the Road Rise Up is an uplifting and enjoyable piece, and The Factory Theater handles it well. If you expect an Irish play to be melancholy, this is something wholly different. It’s a joy to be a part of on a cold late winter evening.
May the Road Rise Upis a Factory Theater production now playing at 1623 W Howard St , Chicago, until Mar 30. Check the website for specific dates, times, and tickets. Find more information about current plays in our front page recs and attheatreinchicago.com.