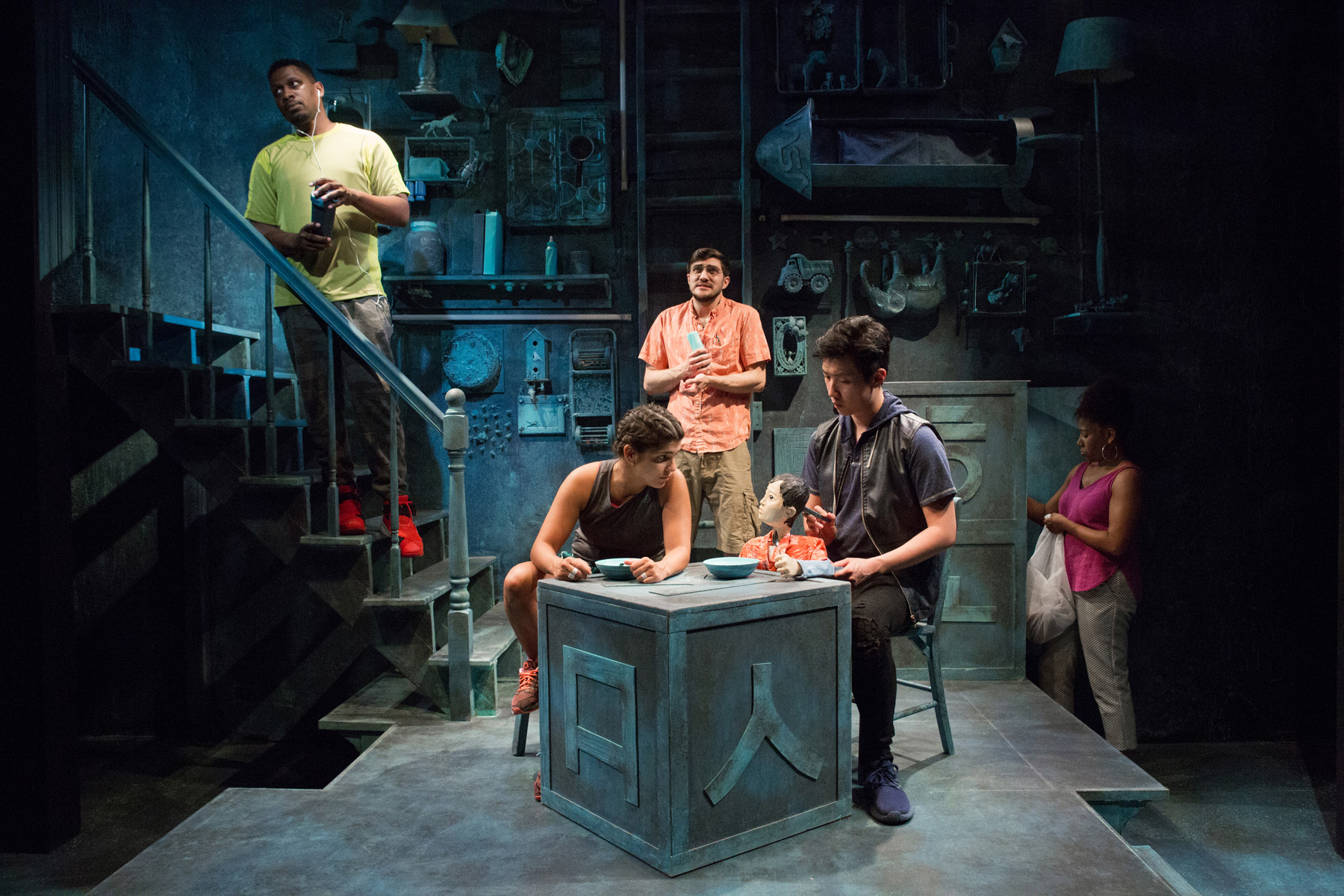 The Gift Theatre’s midwest premiere of Hansol Jung’s Wolf Play, which contains unusual and original characters and a truly inventive plot, is like nothing I have ever seen before. Directed by Jess McLeod, this little gem is full of unexpected moments, strong acting, laughter, and real emotion. If it were not for the fact that its ending made me very angry—an interesting reaction on my part that I can’t really discuss without giving things away—I’d go so far as to say that it is one of the best plays of the year.

The play is centered on an 8-year-old Korean boy whose adopted father (Tim Martin) has decided that, with a new baby in the house, it’s all too much to handle; therefore he takes to the internet to see if he might be able to offload his son. Online, he meets up with a very nice couple and decides that they will be fine. It isn’t until he has signed all of the documents to give the boy away that he comes to realize that this is a lesbian couple; his homophobic reaction comes a bit too late.

But he has not told the couple the whole truth about the child. For one thing, the two women had been led to believe that the boy was much younger. For another, the boy, played by a wonderful puppet made by Stephanie Diaz with dialogue spoken by Dan Lin, claims not to be human, but a wolf. He says his name is Jeenu, not Pete, Jr. as his father had told his new moms. Within his mind, he understands the world as a wolf would and responds to it accordingly, which (as one might imagine) results in a lot of aggressive behaviors both at home and at school.

His new family (his “pack”) consists of his moms, Robin (Jennifer Glasse) and Ash (Isa Arciniegas), and Robin’s brother Ryan (Al’Jaleel McGhee). It was Robin whose desperate desire to have a child led to this unusual adoption. Ash, working hard to make a career as a boxer under Ryan’s tutelage, was in much less of a hurry (and absolutely detested the fact that someone would give a child away on the web). Still, it is Ash to whom Jeenu first opens up, for he sees her, with her ritualistic routines, as more like a wolf than Robin. Nonetheless, the boy eventually bonds with both of them, though that does not stop his inappropriate behavior. And when Ash starts thinking she might want to mother him more than she wants to box, Ryan (seeing his gym’s chance to house a champion vanishing) uses the boy’s propensity for violence as a pretext to try to convince his sister that she has made a mistake.

McLeod’s direction is excellent here, as she not only guides this cast to uniformly strong performances but also makes great use of Arnel Sancianco’s fascinating scenic design, often to comic effect. Eric Backus’s original music and sound design also add clever layers to the production. And the whole ensemble shines: Glasse as a woman with a lot of love to give who feels frustrated when it is not reciprocated, Arciniegas as one who thought she had life mapped out until unexpectedly falling in love with this strange child, Lin as both that child and the narrator (called Wolf), McGhee as the generally well-intended brother who is trapped by his own dreams, and Martin as a man defined by his worst action.

I simply cannot say enough good things about this show. I’d see it again, despite the ending. And about that: I was not at all prepared for it to conclude as it did, but maybe the fact that I could get so viscerally and emotionally involved in a play as to hate its ending with such vehemence says something ultimately very positive about Jung’s writing overall, the characters she created and the way this company has brought them to life.

Wolf Play is now playing at The Gift Theatre, 4802 N. Milwaukee Ave, Chicago through Aug 18. Check the website for specific dates, times, and tickets. Find more information about current plays in our front page recs and at theatreinchicago.com.