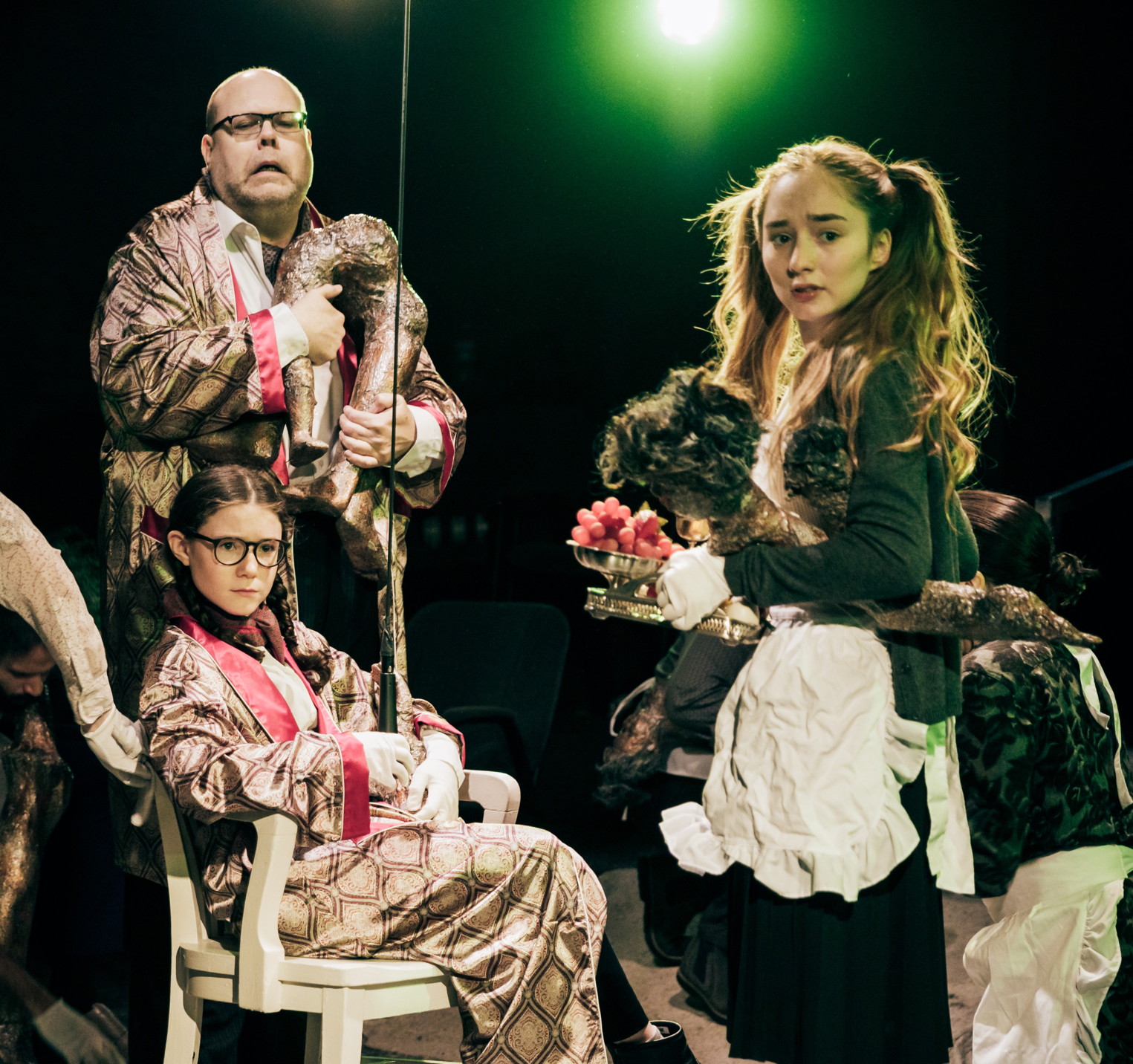 Every once in a while, you come across a play about which, as you are leaving the theatre, you just don’t know what to think. That is the case with A Red Orchid Theatre’s The Killing Game, a little known Eugene Ionesco piece painstakingly brought to life by director Dado. In the tiny A Red Orchid space, this absurdist drama about a city under siege from a devastating plague is about as “in your face” as a play can possibly be. Dado’s talented company of thirteen actors (ranging from the precociously talented fifth grader Katherine Mallen Kupferer to A Red Orchid stalwarts Lance Baker and Doug Vickers) each plays multiple parts as she explores the many ways in which people react to catastrophe.

As the play begins, a macabre figure in a plague mask moves slowly across the stage amid a large group of people merely going about their day, unaware of the intruder which foretells their imminent demise. The shocking discovery of the sudden deaths of two infants quickly escalates as, one by one, the characters onstage find themselves falling victim to this relentless killer, which Ionesco has moving from first symptoms to death in mere seconds. Stunningly, every character onstage succumbs within a few minutes, a blunt foreshadowing that this theatrical experience will not be playing by normal rules. (Of course, the deformed and mangled body parts each actor carries with them probably has already clued us in to this.) And this is only the first scene.

As the play goes on (and, we are told, tens of thousands of deaths are piling up all over the city), we are introduced to dozens of characters representing people from various walks of life being impacted by the knowledge of this terrible disease. Its indiscriminate attacks strike rich and poor alike, though the poorer districts appear to be the most widely affected. As bodies pile up (I’m fairly sure that this play wins the all-time award for most deaths in a single production, besting all other competitors in that first scene alone), we witness the natural human reaction: placing the blame. Is it the poor people’s fault? Is it to do with the medical profession, who can’t get even understand how the disease is transmitted, let alone stop it? Is it the politicians, who have created conditions in which such a thing is possible? No one knows but, in anger and ignorance and frustration, the city’s remaining populace—watching Death stalk their land—demand, impossibly, to find out. Meanwhile the plague sneaks closer to them all.

Dado and her company, which also includes Angela Alise, Dano Duran, Sherman Edwards, Andres Enriquez, Roy Gonzales, Maya Lou Hlava, Ashley Neal, Jill Oliver, Londen Shannon, and Sarah Thompson Johansen, use the small space brilliantly, easily defining and redefining locations to show what is going on in various parts of the city and in many disparate lives. Some scenes are like the first—that is, brief, often comical setups for several deaths—while others are powerfully poignant. In one scene, two men who have been outside the city bravely (or foolishly) return to be with their families. In another, two old people reflect on their long lives. Sometimes the dialogue evolves into chanting or even singing. No matter what the style, though, the plague is waiting for them. Dado also makes use of video projections in various places around the theatre: politicians and experts advising the people how to respond to the disease, shut away (we assume) from contact with the outside world that would endanger them as well. But the disease is unstoppable: by the time the spectre in the plague mask reappears, it has claimed hundreds of thousands of lives and left countless others living in terror.

Sounds like a real uplifting piece, doesn’t it? Interestingly, the sheer volume of deaths, coupled with the facts that Ionesco is not interested in adhering to rules of epidemiology and that Dado has her actors simply drop dead most of the time with no preamble, desensitizes us and keeps the action from becoming overwhelming. Dado’s decision to cast roles without regard for gender (or, in the case of Kupferer and a couple of other younger actors, age) also allows the audience to maintain distance from what is going on. And then there are those body parts, crafted by Samantha Rausch, mostly arms and legs which are often simply there but occasionally stand in for canes or other real-world props. It’s easy to isolate the absurdity of it all when the stage is full of twisted, bizarre pieces of people.

The Killing Game is most definitely not for everyone. It is the perfect example of why this site has a yellow light designation: a play that is brilliantly directed and performed but which is, by its very nature, odd and off-putting. There is a reason it is not one of Ionesco’s more well-known pieces: it’s as if the playwright, who often mused about the absurdity of life and the inevitability of death, just wanted one huge “Game of Thrones” level annihilation to develop his ideas. In the hands of Dado, though, it is a piece that can occasionally make you laugh and very likely haunt you and make you think, and that is ultimately what Ionesco is all about.

The Killing Game is now playing at the A Red Orchid Theatre, 1531 N Wells, Chicago, through June 23. Check the website for specific dates, times, and tickets. Find more information about current plays in our front page recs and at theatreinchicago.com.