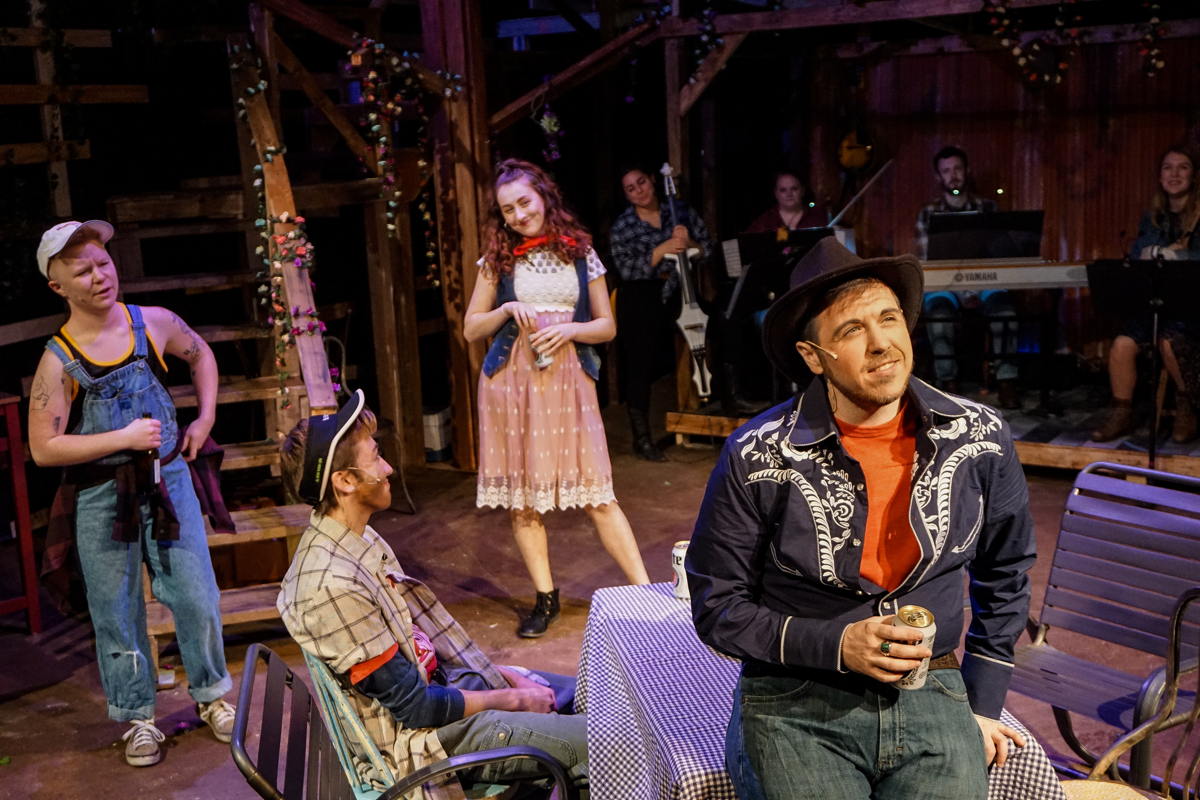 OK, I’m starting this review with a huge disclaimer: In this production of a show about the chosen family of a transgender man named Robert Eads, that character is portrayed by my son, North Homeward. In the past, I have praised some shows he was in and panned others (including possibly the worst show I’ve seen in all of my reviews), so I feel I can be fair. But you should know all of this before you dive in. You should also know that I myself am transgender, having been the first teacher in the country to transition on the job in the same year in which this play takes place.

That being said and understood, Pride Films and Plays’ Southern Comfort is a remarkable production. Written by Julianne Wick Davis and Dan Collins, it is the musical version of a 2001 Sundance Festival award-winning documentary (also called Southern Comfort). Here, under the direction of JD Caudill, the Chicago premiere of this play features a strong ensemble cast that takes us to Toccoa, Georgia in 1998 (a place Eads refers to as “bubba land”) and a mixed group of transgender people (all played in this production by transgender actors) who are gathered into a “chosen family” by the strength of Eads’ personality. The show features a soundtrack of folk and country-flavored songs written by Davis, some of which set the scenes (like the beautiful pieces that take us through the seasons) and some of which advance the story.

That story involves the fact that Eads has recently been diagnosed with terminal ovarian cancer, a cruel trick of nature for a trans man. (“The last and only part of you that is still female, and (God’s) trying to kill you with it,” one character laments.) All he wants at this point in his life is to stay alive long enough to get to the Southern Comfort Transgender Conference and dance with his new love, a transgender woman named Lola (Kyra Leigh), but his cancer and his new relationship both put a strain on his chosen family, especially his relationship with the young man he considers  his “son,” Jackson (Lizzy Sulkowski). The rest of this family includes Sam, a transgender man (Benjamin Flores), his cisgender wife Melanie (Sinclair Willman), and Jackson’s new girlfriend Carly, like Lola a transgender woman (Ricki Pettinato). [A five-piece orchestra, referred to as Storytellers, also play various smaller roles. The members of that group are Mario Aivasian, Taylor Dalton, Justin Harner, Candice Kight, and Kimberly Lawson.]

Throughout this very personal musical, Eads’ chosen family—we see several scenes involving the bio families of Eads and others, and they are not pretty: to say relationships are strained would be a severe understatement—acts pretty much as any family does. There is a lot of love, to be sure, in their Sunday gatherings, but there can be uncomfortable moments as well. Jackson’s attitude toward Lola—he doesn’t see her as genuinely transgender because she has not begun hormones or made a transition in her job—causes a rift, as does his own desire to have what is known as “bottom surgery,” i.e. a phalloplasty, a very expensive, as-yet-not-perfected (even in 2019) surgery that Eads feels is completely unnecessary for gender completeness and “reduces gender to what’s between our legs.” We witness their positive as well as negative moments, and that is part of the point: transgender folks are pretty much the same as everyone else.

Caudill gets some excellent performances from their ensemble, starting with Homeward, who has the difficult task of portraying the slowly decaying Eads. Given the nostalgic feeling of the piece—we are, after all, watching the last year of someone’s life—it would probably be tempting to play Eads as a saint on earth; indeed, that’s how much of his chosen family views him. Homeward certainly shows us this generous, open side of Eads, but is unafraid to show his more difficult side as well, especially in an argument with Jackson. Sulkowski, diving into their role, also gives a brave performance as the piece’s nominal antagonist, the man whose pain about losing another father figure in his life leads him to lash out at Eads. (His song, “I Don’t Need Another Father,” is powerful and plaintive.)

Indeed, the music in this show brings out the best in the characters. Eads, joined by Storyteller Lawson, sings a beautifully sad song called “Barbara,” the story of the girl he never truly was. That theme is also tackled comically in a song shared by Sam, Jackson and Robert called “Women,” in which they sing about the idea that “women were never this way back when I used to be one.” (As noted, they are very blunt about their lives throughout the play.) Homeward has several other songs as well, notably “Southern Comfort,” in which he praises the conference as “a place you keep on goin’ cause it’s never gettin’ old,” and “I’m Goin,” an homage to the conference’s deep meaning for him, in which he sings, “Too much living gets wasted on not being true.”

But this is, as I’ve noted, an ensemble musical. All of the cast members have shining moments. Leigh has a couple of beautiful numbers as Lola, including a lovely ballad called “Bird,” in which she imagines that she can sing “so sweet and clear” and fly like a bird, becoming “such a pretty little thing.” Sulkowski and Flores sing the sardonic “Bless Their Hearts” about the difficulties that the so-called “genteel” southern folks have with who they are: “Let ‘em talk, let ‘em chatter…when they sum me up by just some of my parts.” Pettinato has a moment in Act Two with “Walk the Walk”; “We weren’t born with definitions; we were slates and we were clean,” she sings about being transgender. And Willman, playing the lone cis member of the family, gets a lovely moment in which she declares that her love for her husband Sam supersedes all of the stupidity and prejudice of the world. “Let ‘em all look,” she declares, and you feel her taking her power back.

In addition to a strong cast, Southern Comfort features the work on a fine design team led by Caudill. Jeremy Hollis’ multi-level set is beautiful. Sanja Manakoski’s costumes perfectly define who these people are. In a this rife with songs, Robert O work as music director was clearly critical. And all of the members of the team—props designer Kat Moraros, choreographer Allison Petrillo and others—combined to make this a show that is deeply moving and visually attractive.

Southern Comfort is a powerful, emotional play and clearly an act of love for this cast and director. On press night, there were some sound issues that will undoubtedly be corrected, but they did not detract from the compelling subject matter and excellent performances. In an era in which too many of our politicians are indeed judging transgender people “by just some of (their) parts,” in which the government is attempting to “erase” them from existence by redefining male and female, in which its policies toward them are being (quite literally) written by a recognized hate group, we need a play like this one as a reminder that these are, after all, just people. They are people who are simply attempting to be true to themselves in a society that is not all that forgiving of anything remotely unusual. What the characters in this play desire love and family, and Robert Eads brought it to them, creating a family that may occasionally disagree (like all families) but that inevitably is bonded by something even more powerful than blood: choice.

Southern Comfortis a Pride Films and Plays production now playing at the Broadway Theatre, 4139 N. Chicago, until Mar 31. Check the website for specific dates, times, and tickets. Find more information about current plays in our front page recs and attheatreinchicago.com.