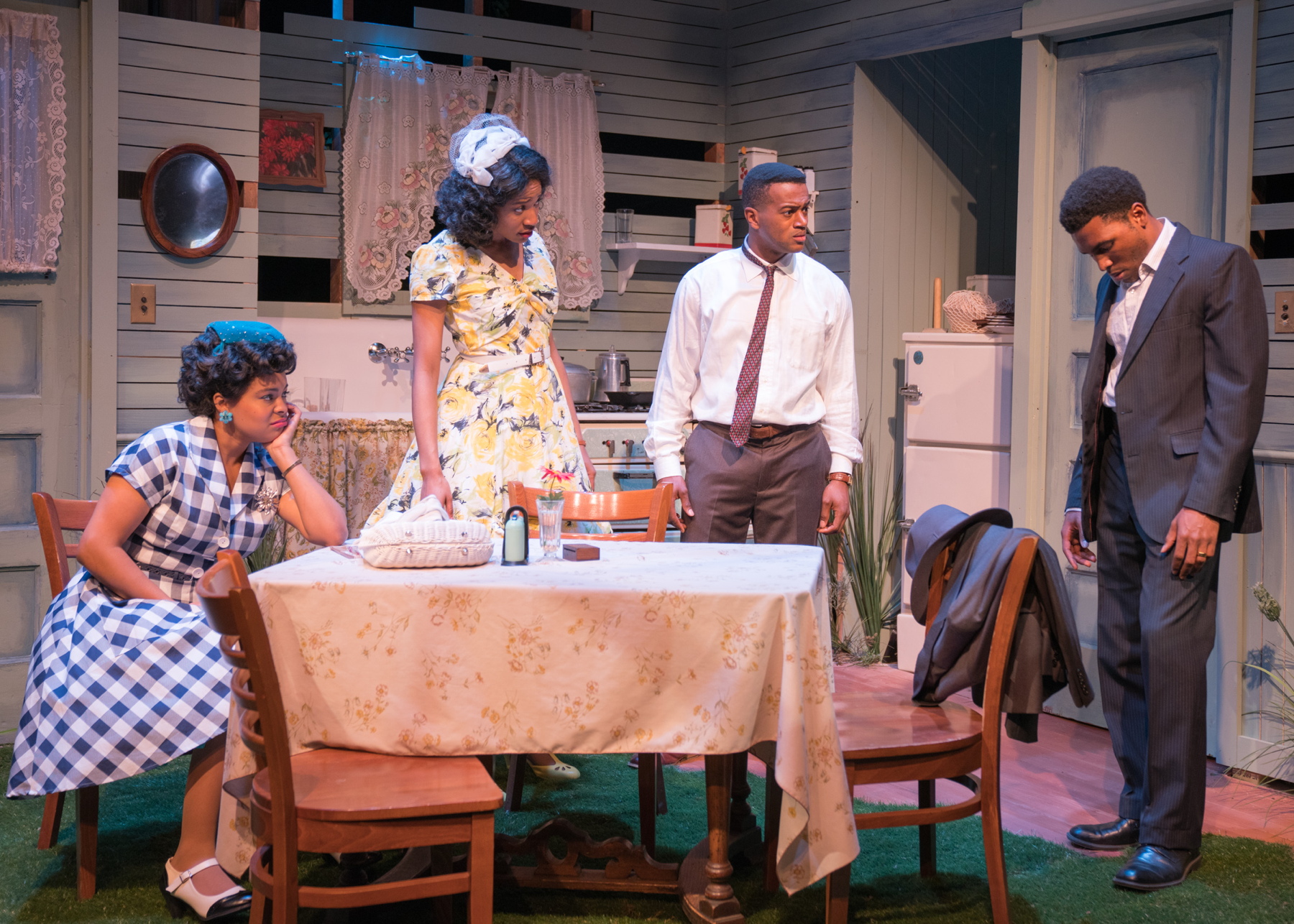 Jalen Gilbert stands before the audience at the beginning of Timeline Theatre’s production of Jiréh Breon Holder’s Too Heavy For Your Pocket just enjoying the air. Taking deep breaths and allowing its freshness to permeate every cell in his body, Gilbert stands there for quite a while, director Ron OJ Parson allowing the actor all the time he needs to establish what will become a motif in the play. The fresh air, so calming, symbolizes freedom as well as promise; Gilbert’s character Bowzie Brandon is waiting, as the play opens, for his acceptance into Fisk University, an occasion that would make him the first person in his working class neighborhood to go to college. Like his lifelong friend Sally-Mae (Jennifer Latimore), who is both pregnant and about to graduate from beauty school, Bowsie has his whole life ahead of him.

Unfortunately, that life is being lived in Nashville in 1961, just as the Civil Rights movement is heating up. As Bowzie begins summer classes at Fisk, he becomes friends with a group of more wealthy students who echo Martin Luther King’s calls for non-violent protest and are planning to join the Freedom Riders in their travels about the South to highlight and protest the failures of so much of that region in enforcing the new laws restricting discrimination. And Bowzie, despite his long desire for education as a means out of poverty, finds himself attracted to their message to the point of being willing to sacrifice everything for their ideals.

Take a deep breath: it’s going to be a bumpy ride.

Gilbert is outstanding as Bowzie, raw and honest both in celebratory moments with his family and friends and later, in darker and more frightening scenes with the Freedom Riders as their bus is attacked and they end up imprisoned. Those who had wealthy families—those who could afford the ideals he is reaching for—make bail, leaving impoverished Bowzie alone with his newfound beliefs. It is clear that the sacrifices he is making are far greater than theirs, but he is willing to make them, hoping to build a better world for his children. All of this is staged very well by Parson, who keeps Gilbert isolated for scenes away from his former life, highlighting how confused and alone he feels inside.

As his wife Evelyn, a lounge singer who longs for the day when she can retire and allow her college-educated husband to take over the breadwinning, Ayanna Bria Bakari embodies the other side of that equation: lost hope. All she can see is that her husband is willing to throw away his education and their lives for some wealthy person’s ideal, and her anger festers within her. Bakari, like Gilbert, takes her character to such emotional places that her pain is palpable as she hurts so much that she will not even answer Bowzie’s phone calls from the road.

Sally-Mae and her husband Tony (Cage Sebastian Pierre) are also struggling: he has such a history of womanizing and gambling that she cannot believe him when he tells her he is constantly working late to improve their lives. Pierre gives a dynamic performance as the husband desperately seeking forgiveness for past misdeeds, but it is Latimore who shines here, her character evolving from someone who doesn’t even know how to stand up for herself to one who, with a tear-streaked face, is willing and able to demand her own rights. More than other characters, Sally-Mae is caught in a trap that is not of her own making, and Latimore’s movement from sweetly smiling to painfully pleading to, in the end, insisting on living life on her terms, reminds us that the choices people make affect not only themselves but everyone around them.

Parson, one of Chicago’s most gifted directors, uses every bit of José Manuel Diaz-Soto’s set as he pulls these brilliant performances from his actors. Scenes blend into each other showing the characters at home, on the road, in the lounge, in prison, etc., all aided nicely by Maggie Fullilove-Nugent’s lighting design and Christopher Kriz’s original music and sound design. But Parson’s biggest job here is bringing out the poetry of Holder’s text. Holder, based on this play, has the potential to become a major voice in theatre, and Parson clearly understands that, allowing his actors to fully explore the nuances of the language and characters.

Ultimately, this is a play about the choices we make, the need to stand up for ideals, the disruption that can cause, and the need for forgiveness. Each of us chooses the burdens we bear but, having chosen them, we need to be strong enough to carry them. All of these characters save Sally-Mae have made choices that adversely affect others—Evelyn’s is a hasty and frankly forced and unrealistic moment derived from her pain—and each needs to learn to live with them and learn that this is what humans do: we make decisions, some of which are unfortunate. In the midst of a play focusing on a moment in history that dangerously sought to undo some of the powerful mistakes of the past, Holder makes it all very personal because it is. And as we attempt to understand and deal with a resurgence of the hatred that led to slavery and Jim Crow, it behooves us to ask ourselves to stop, breathe deeply, and wonder what we would be willing to risk for our ideals.

Too Heavy for Your Pocket is now playing at the Timeline Theatre, 615 W Wellington St, Chicago, through June 29. Check the website for specific dates, times, and tickets. Find more information about current plays in our front page recs and at theatreinchicago.com.