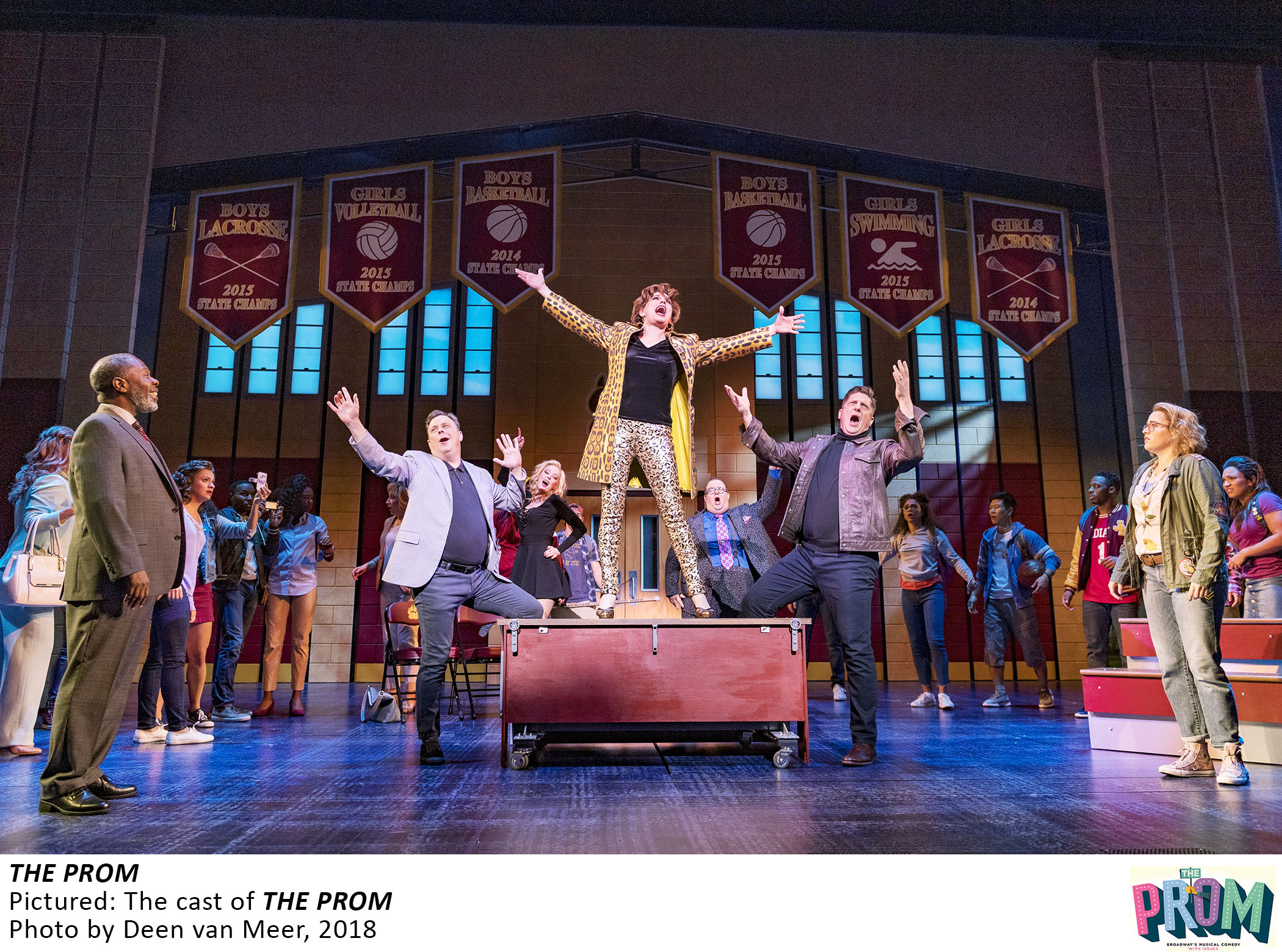 This could be ripped from the headlines: Small Conservative Town Cancels Prom Over Fears of Gay Couple. In fact, it was: more than one small town has acted so blindly. It’s a sad fact of current American life that fear of those who are “different” can cause otherwise rational and decent human beings to become ugly, nasty creatures who suddenly feel it should be their one purpose in life to stop the spread of (fill in the blank here: racial equality, immigration, gays, trans people, etc.) encroaching ever closer to their previously unblemished lives. The new musical The Prom, now playing at the Longacre Theatre on Broadway, contains a farcical examination of such small minds playing out against a sweet, sincere love. It’s also a scathing satire on the narcissistic attitudes of wealthy, famous people. These dichotomous goals don’t always mix perfectly, but in the end The Prom is a feel-good “love conquers all” kind of story that doesn't really attempt to be plausible and just leaves you feeling happy.

The first act, in which the dichotomy is most pronounced, plays out in two venues. It begins at a Broadway after-party at which the reviews are so awful that the show will close down, leaving its two self-centered stars wondering how to redeem themselves. Seeking a cause to champion, they come across the case of a seventeen-year-old gay girl in tiny Edgewater, Indiana who is causing a furor because she just wants to take her girlfriend to her Prom. Of course, Edgewater, is a cliché small town with only a single Applebees restaurant, a conservative PTA running amok, and that single gay couple just trying to get along. It isn't really very original, but it's still fun.

At first, the outsized antics of the stars, Dee Dee Allen and Barry Glickman (Beth Leavel and Brooks Ashmanskas), and the low-key tension of the young girl, Emma (a brilliant Caitlin Kinnunen) seem to clash rather chaotically in style and content, but this is a double story: it’s as much the stars’ emotional rebirth as it is the girl’s prom tale. And as the play brings them together, we begin to sense that this egotistical Broadway pair might just be of some help after all.

There is no such sense though in their introduction to Edgewater. At a meeting in which the school principal (the totally grounded Michael Potts, who has a lovely solo) has practically convinced the PTA and its leader Mrs. Green (Courtenay Collins) to back down, the sudden arrival of a retinue from New York led by a flamboyantly gay man and a no-holds-barred diva (whose grand entrance includes, naturally, a musical number) simply adds fuel to the fire. Townspeople suddenly see the intrusion of New York values as another thing to fear. And, frankly, they have a point: these out-of-towners haven't the first clue about what life is like in a small Midwestern town.

Along with Allen and Glickman, the Broadway entourage includes Angie (Angie Schworer), a genuinely sweet young woman whose great desire is to star in Chicago, former TV sitcom star Trent Oliver (Christopher Sieber), a bit of a blowhard who seems clueless about real life, and an agent, Sheldon Saperstein, who wants to help his stars get back on top. This motley assemblage descends upon the small town determined to force them to let this girl go to prom with her secret girlfriend Alyssa (Isabelle McCalla), who happens to be the daughter of the PTA leader.

Director/choreographer Casey Nicholaw (Mean Girls, Aladdin, Book of Mormon) once again gets stellar performances from the leads and works magic with a small but talented ensemble, especially in songs like the effervescent “Love Your Neighbor” and the ebullient “You Happened.” Nicholaw’s touch can be felt throughout the musical, but nowhere more clearly than in Barry Glickman’s showpiece number, “Barry Is Going to Prom,” in which the 40-something actor envisions a prom date he never had. It’s a star turn for Ashmanskas as well as a compelling moment for his character. Leavel has her own star turn in “The Lady’s Improving,” and composer Matthew Sklar and lyricist Chad Beguelin (who wrote the book with Bob Martin) even give Schworer her moment in “Zazz,” co-sung with Kinnunen, whose “Just Breathe” sets up her character as “Dance With You” (with McCalla) sets up the main issue. McCalla gets her own moment as well in the poignant “Alyssa Green,” and Kinnunen refocuses everything with the beautiful “Unruly Heart.”

As much as the first impressions of the two strands of this piece seem to be polar opposites, the joy of the musical is watching as they come together, as the carelessly grandstanding Broadway stars learn how to be better people while doing something originally expected only to satisfy their excessive egos and as their interference ultimately helps Emma to see that she is a stronger person than she thinks she is. It's a thoroughly stereotypical plot, but it's done in a wonderfully fun way. By the show’s end all you want is to spend more time with these people, which certainly was not the impression I had at the start, when “It’s Not About Me” painted the Broadway crew as self-absorbed and lacking in any real understanding of the world (which was, um, true). They (mostly) grow on you, though, as they grow on Emma, and in any case, her story is the lovely backdrop on which all of this hangs.

The Prom is the first really fun musical of the 2018-19 season, and it should be a huge hit. And it will most definitely have a long afterlife, not just in high school theatres (where it will eventually become a staple) but across the country. It would be nice to hope that, by the time this occurs, the play will be a silly, quaint remnant of the past, but the way things are going in this country that is not altogether likely. As silly as The Prom can be, its soul is serious, and it contains messages we can't hear enough.

The Prom is now playing at Longacre Theatre, 220 W. 48th St, New York, in an open run. Check the website for specific dates, times, and tickets. Find more information about current plays in our front page recs and at theatreinchicago.com.