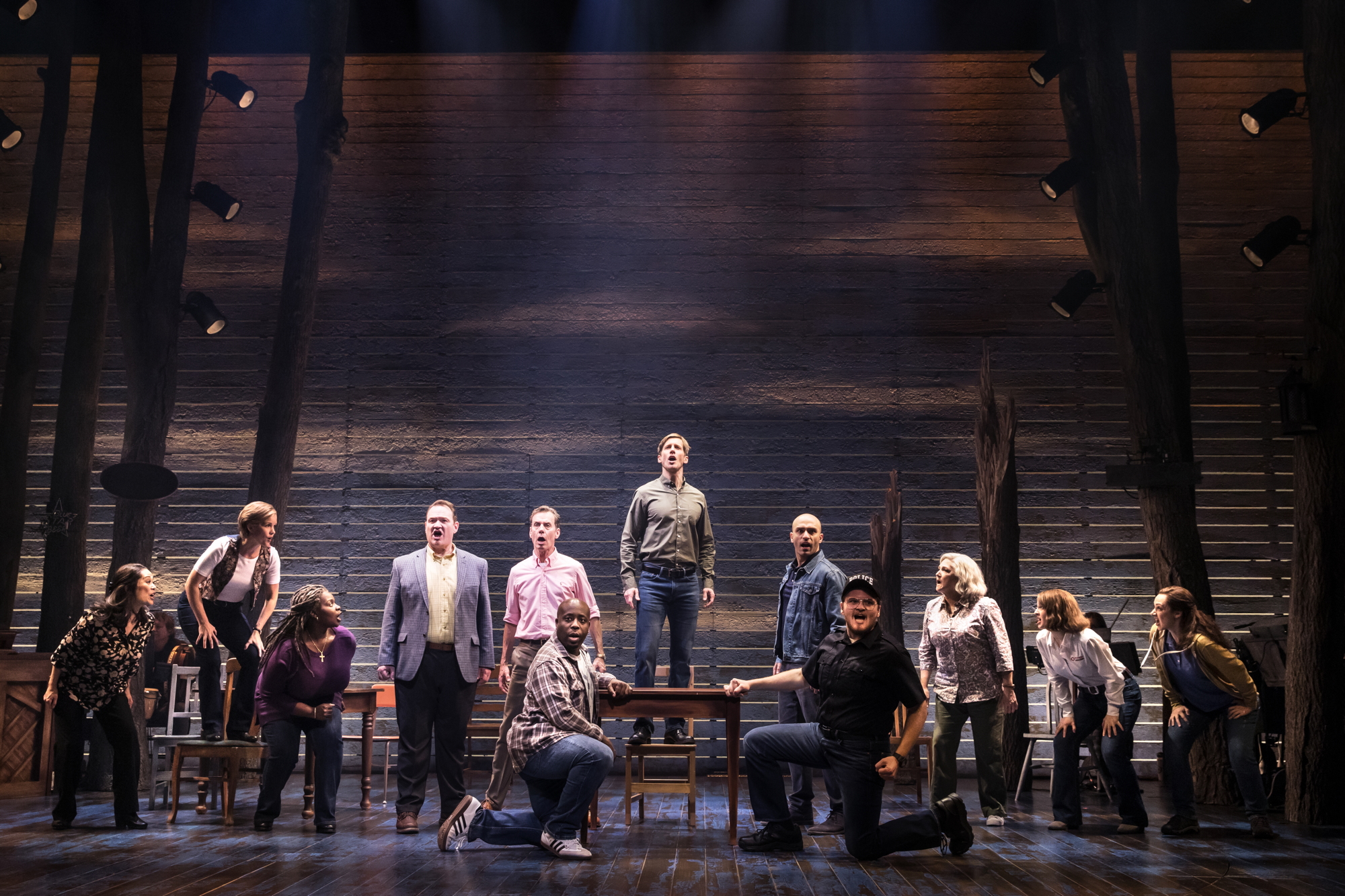 Every American knows what happened on September 11, 2001, but until the musical Come From Away premiered on Broadway in 2017, few knew one of the most incredible and uplifting stories connected with that devastating day. The musical, written by Canadians Irene Sankoff and David Hein, takes place in the small community of Gander, Newfoundland, when American air space was unexpectedly closed and 38 massive transcontinental flights were diverted to the town’s airport with no warning whatsoever. (The airport was large enough to accommodate them because of its history as a transatlantic refueling stop.) Stranded there for four days, 7000 passengers were welcomed with open arms by a few small hamlets with only 9000 residents who, taking Canadian hospitality to the extreme, sheltered, clothed and fed them, invited them into their homes, and provided emotional support to people whose world had suddenly changed.

The great news is that the touring production of Come From Away, cast with many Broadway veterans and still directed by Christopher Ashley, is every bit as strong as the version for which he won the Tony. Go to see this show and you will be getting an authentic Broadway experience (for a considerably less expensive price). The set is the same, or if it has been changed it isn’t by much. The music is the same (and these performers deliver versions of the songs that rival the quality of the original cast). And if there were an award for Feel-good Play of the Year, this would be an easy choice: though it is written with careful attention to the darker side of the post-9/11 world (a Muslim passenger, for instance, causes continual concern among the others), it is a shining and compassionate strangers-helping-strangers story that blesses its audience with a version of humanity they can be proud of instead of the one they constantly see in the news.

“Welcome to the Rock,” the islanders sing in their opening number as they tell of learning about the terrorist attacks and realizing that they would be used as a diversion point. “A candle’s in the window and the kettle’s always on. / When the sun is coming, and the world has come ashore. / If you’re hoping for a harbor then you’ll find an open door.” Meanwhile, the passengers on those 38 airplanes are sitting on the tarmac after already enduring flights of up to 28 hours, and they have no clue even why they have been diverted to this place…or even where this place is. Some freak out, some complain, some get drunk on airline liquor. But when they are finally allowed to leave the planes, this diverse group of people from all around the world is confronted with two realities at once: the tragedy of 9/11 and the fact that they will be here, “wherever we are,” for quite a while.

Eventually, the wary (and weary) travelers come to realize that the famous Canadian hospitality is not merely a myth, as the local stores provide everything they might need and the towns even get together to throw a huge barbecue for the visitors. But the fact is that, comforts or not, they are all stuck in Gander while, somewhere, loved ones are wondering what has happened to them. And for some of them, most notably  Danielle K. Thomas’s Hannah, whose son is a firefighter with the Second Company that helped out at the World Trade Center, there is the terror of Not Knowing. (While phones are eventually supplied, satisfying most, Hannah’s travails continue: her son is apparently among the missing.)

For others, the island is slowly becoming a second home, and for some this moment is redefining their lives in very personal ways. Some are falling in love with people they met on the plane, and some are having old relationships challenged. The locals even fashion a rather elaborate ceremony (including kissing a cod) to initiate a foursome of the newcomers into life as Newfoundlanders.

This is a rare Broadway musical that is a true ensemble effort. Though there are a few who stand out merely by virtue of their positions on the island or the plane (for example, Thomas, Kevin Carolan as Claude, the Mayor; Andrew Samonsky as half of a gay couple both named Kevin and the island head of a transportation union; and Julie Johnson as Beulah, the wonderfully matronly schoolteacher) it is not a play about individuals, though it succeeds in weaving together a remarkable number of stories about a wide range of characters. With that in mind, though, one actor does have a standout moment that requires mention. Becky Gulsvig, as the teacher Annette on the island and the pilot Beverley, has dual roles like most, but it is in her role as the pilot that she truly shines. Her solo, “Me and the Sky,” is both a triumphant accounting of a life spent breaking barriers as a female pilot and a heartbreaking recognition that her lifelong passion has just been tainted. Gulsvig’s anguish is palpable here, but no more palpable than her joy when she gets to tell the passengers later that they have arrived in Dallas.

Come From Away is playing at the Cadillac Palace Theatre in a limited three-week engagement, and it is one of those shows that is practically guaranteed to inspire those who see it. Sit up close if you can—this is a very personal feeling show and the theatre is large—but on opening night the entire house was on their feet for the standing ovation at the end, and this production truly deserved it. If you’ve never heard this amazing tale of what happened on the outskirts of 9/11, you owe it to yourself to come and experience this heartfelt, hilarious, and exhilarating true story. It will stay with you for a long time.

Come From Away is presented by Broadway in Chicago at the Cadillac Palace Theater Center, 151 W. Randolph St, Chicago through Aug 18. Check the website for specific dates, times, and tickets. Find more information about current plays in our front page recs and at theatreinchicago.com.

2 thoughts on “The touring “Come From Away” is every bit as funny, emotional, and inspiring as Broadway’s version”