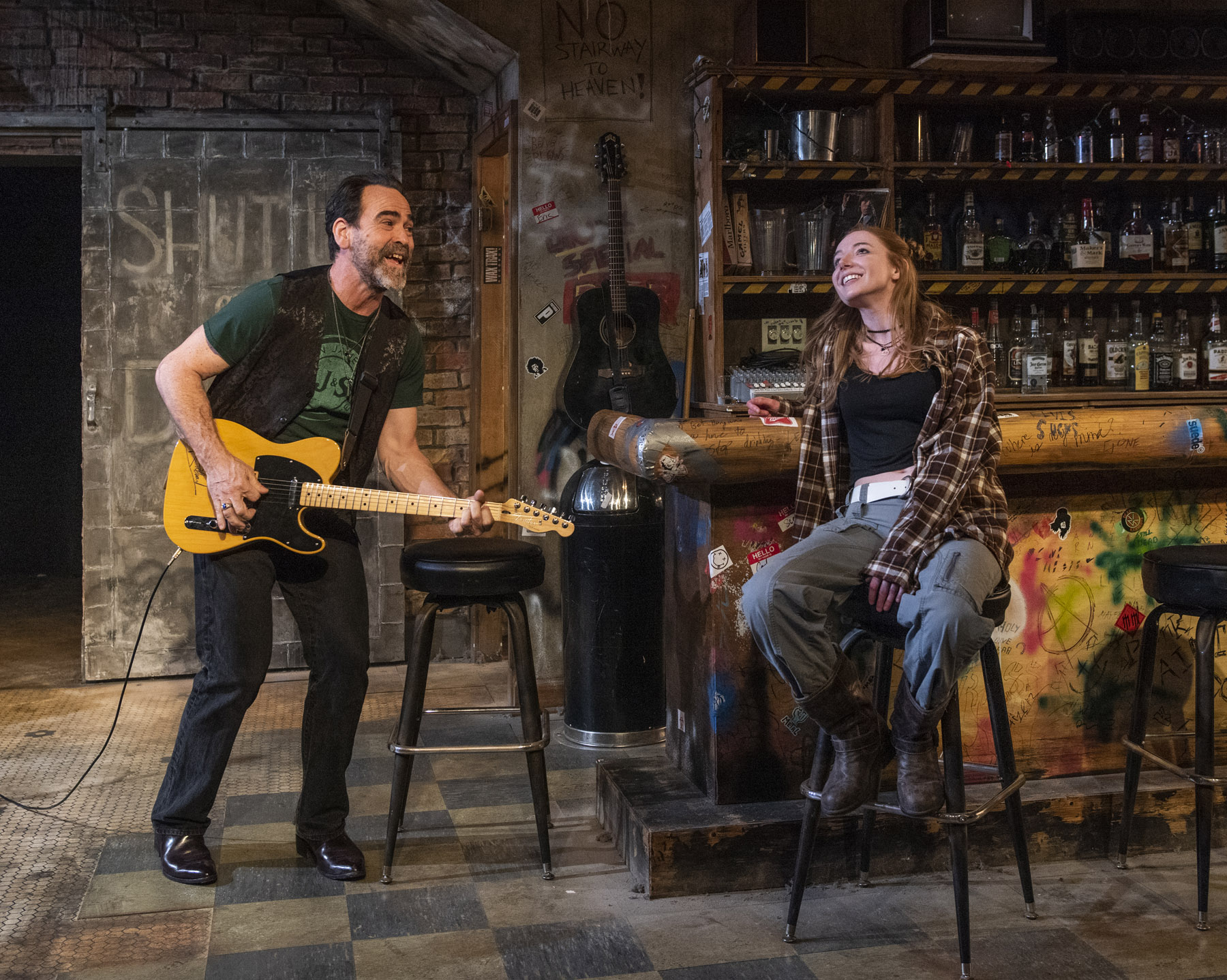 It’s 1992 and, in Chicago, Hank’s Bar—an amalgam of every small rock club ever to exist in the city—is about to celebrate its 25th year as a venue where some of rock’s biggest names (think Nirvana, Stevie Nicks, the Clash, etc.) have played over the years, some of whom were essentially discovered by the owner, Hank (Jeff Mills). The Reader has done a major nostalgic profile of the tiny, rundown bar (wonderfully realized by Jeffrey Kmiec) and Hank’s roll as a rock and roll prognosticator over the years. But it’s 1992, and rock and roll is being supplanted in the minds of the young by hip hop and house music spun by DJs. Former rock and roller Laura Eason (once a member of the Chicago group Tart) explores this musical changing of the guard in her 2015 play The Undeniable Sound of Right Now, now playing at Raven Theatre under the direction of BJ Jones, who makes a good decision in mining it for its many comic moments before the more dramatic elements take over.

To Hank, there is something “magic” about live music, and he has been deeply involved in it all of his adult life. With his 21-year-old daughter Lena (Lindsay Stock), who has her own apartment above the bar, he curates (a word he finds pretentious) the music that permeates the place, taking joy in discovering new unsigned bands who might be on the cusp of making it. But Hank cannot read the writing on the wall as well as Lena can: despite his detestation of the concept of nostalgia, he is desperately trying to keep the past alive in his bar, refusing to book anything but good old rock and roll bands. Lena, however, has one foot in the golden era of rock and the other in the “right now”; she enjoys a good hip hop concert, and she sees the artistry of the DJs whom her father dismisses as simply playing records. “We can all play records at home,” he chafes, shutting down her concept of booking one particular popular DJ she is actually seeing romantically.

To Hank, “the undeniable sound of right now” is the music played live on his stage. Lena, though, who loves that music, also hears the call of the music that is popular with her generation. And with the bar stagnating (and the mercenary son of the genial landlord—played by Casey Morris—ready to increase their rent significantly) she realizes that a concert headlined by her boyfriend Nash (Henry Greenberg) might be the one way they have of getting out of debt and continuing her father’s dream for many more years. Nash, though, has rankled Hank in their first meeting, coming across as arrogant in his defense of house music, and Hank is even less likely to give in. Offering him support are his former girlfriend Bette (Dana Black), who helped raise Lena after her drug-addict mom was out of the picture, and Toby (Christopher Acevedo), a sweet, somewhat geeky boy who has worked for Hank for years.

The beats of this play are not really surprising—with a set-up like that you pretty much know where it is going well before it gets there—but Eason keeps it interesting with some wonderful character development. This is especially true with the father-daughter relationship of Hank and Lena, but both Toby and Bette have some lovely moments as well. All four actors keep it real, and it’s easy to believe this dynamic has gone on for a long time. Mills is fittingly grizzled and blunt-spoken, lending the character a gruff center while maintaining his ability to be believable opening up his heart. Stock is determined and open, putting her entire body into her portrayal of youthful enthusiasm and budding love. Acevedo is perfectly disarming as the quiet boy who loves her unrequitedly and loves the bar wholeheartedly. And Black is completely genuine as someone who, despite having moved to the suburbs, comes back day after day to this place and people she loves. All of these actors, with the help of Jones, are able to bring real life to their characters and gentle humor to the play.

Greenberg and Morris, essentially playing the villains of the piece, do their best to keep relatively one-dimensional roles from seeming that way. Nash’s fondness for the old bar and its role in Chicago’s musical history seems genuine even as he focuses on change—and a big payout. Money also prompts Joey (Morris), but there is also a hint of sadness concerning his non-relationship with his father. Though Eason is clearly on the side of rock and roll, it’s hard to fault either of these characters: they are just heading in the direction that will bring them profit, and Eason only hints at but does not flesh out the conflict and uneasy marriage between artists and commercialism that certainly, as much as anything, defines the end of the rock era.

The Undeniable Sound of Right Now is unsure what it wants to argue. It is a nostalgic trip within a nostalgic trip, taking us back not only to the early 90s, but keeping earlier decades alive in its memories of the bar’s history, even using things like a guitar signed by Keith Richards to make the point that old times were wonderful. (Hank has a whole treasure-trove of such items in his apartment.) But at the same time Eason acknowledges that you have to know when to move on. Still, while the play argues that you can’t stop progress, its sympathies definitely lie in the past. This one is for all the audience members who fondly remember the joys of hearing bands perform live in tiny clubs, who remember a time when bands were loath to license their songs for car commercials, and who would like to believe, as Hank does, that the music’s magic and our love for it are all that is needed.

The Undeniable Sound of Right Now is now playing at the Raven Theatre, 6157 N. Clark, Chicago, through June 16. Check the website for specific dates, times, and tickets. Find more information about current plays in our front page recs and at theatreinchicago.com.