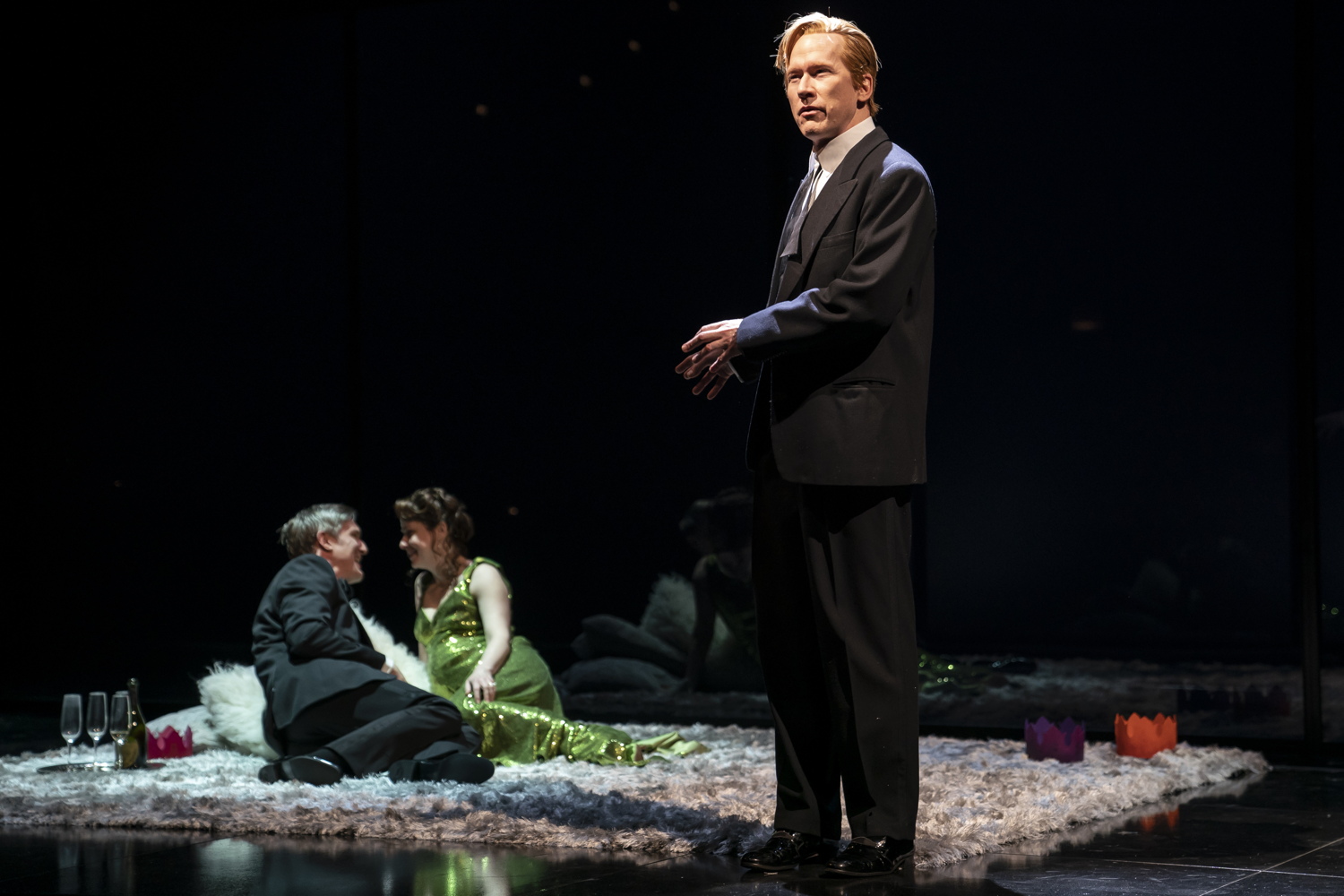 The Winter’s Tale, which is known mostly for its famous stage direction “Exits, pursued by a bear,” is one of the Shakespearean plays categorized as a “romance,” mostly because it doesn’t fit neatly into any other category. For its first half, it plays like a typical tragedy on speed: imagine Othello if everything but the central events were excised, the Moor’s jealousy had been triggered from the opening scenes, and Desdemona didn’t make it to intermission. In its second half, though, The Winter’s Tale settles down into bucolic country scenes featuring dancing, a self-involved thief, a secret love affair, and some wonderfully comic moments before returning to the scene of the original tragedy and quickly resolving everything that can possibly be resolved (and even one thing that shouldn’t be able to be).

This schizophrenic structure is one of the reasons that the play is one of the least produced in the Shakespearean canon, and that fact alone may well have been one reason that Robert Falls, the gifted Goodman Theatre Artistic Director, selected it as his latest production of the Bard’s work, following 2013’s Measure For Measure and 2006’s King Lear. For this reimagining of the play, Falls has trimmed it significantly (though of course the bear remains), the result being that the horror of the decisions made by King Leontes (Dan Donohue) and the guilt that they cause him are even more in focus than usual, and that the denouement of the play feels a bit rushed.

Donohue is a very strong Leontes, a Sicilian King who, out of almost nothing, imagines an affair between his wife, the beautiful (and faithful) Queen Hermione (Kate Fry, in a raw and powerful performance) and his longtime friend King Polixenes of Bohemia (Nathan Hosner). Once engendered, the thought consumes Leontes, who eventually enlists one of his servants to kill the visiting King. That having failed, Leontes turns his wrath on his wife and her unborn baby, accusing her of having the affair and the fetus of being the progeny of Polixenes. Despite the pleas of all the members of his household, he will not be dissuaded, a dark decision that leads to several deaths, including his wife and son as well as the unfortunate servant who is chased offstage by the bear.

The newborn daughter, though, is spared (if you can call it that when the King has ordered her to be abandoned in a forest across the sea—in Bohemia, of course) and eventually, having been rescued, grows up to be a sweet girl named Perdita (Chloe Baldwin) who, despite appearing to be merely a shepherd’s daughter, attracts the attention of Polixenes’ son, Prince Florizel (Xavier Bleuel). But the second half of the play ends up actually focusing on the comical self-avowed thief Autolycus (Philip Earl Johnson) and his interactions with the country people we meet in Bohemia, leaving little room for character development of this young couple, likable though they might be. It appears that a new conflict is developing with Polixenes, but that is quickly brushed aside. And the final scenes, including (unearned) redemption for Leontes, feel so rushed that we seem to be watching a highlight reel.

None of this is to say, though, that the play doesn’t work. Indeed, the performances engender strong emotions, especially those of Donohue and Fry. And Christiana Clark has a nice turn as Hermione’s Lady-in-Waiting Paulina (wife of the man who lost his life delivering Perdita to the forest) as she makes her condemnation of her King for his actions known. Walt Spangler’s scenic design, too, is outstanding, whether in the stark, mirrored halls of Leontes’ palace or in the more colorful, whimsical Bohemia. And Ana Kuzmanic’s costumes (somber and formal in first act Sicilia, fun and even a bit silly in Bohemia) reflect the mood that Falls is creating.

There is something here to appeal to everyone, whether you like your Shakespeare dark and serious, lighthearted and merry, or even magical. The Bard in this play was clearly, as his career wound down, trying to do things outside of his long standing formulas, and the result, though mixed, is still fun to watch. Falls’ The Winter’s Tale may not be the definitive production of this somewhat problematic play, but it nonetheless effectively captures its many moods, and is another strong offering by the esteemed director, who continues to prove that there are very few who can match him when it comes to staging the classics.

The Winter’s Tale is now playing at the Goodman Theatre, 170 N Dearborn, Chicago, through June 9. Check the website for specific dates, times, and tickets. Find more information about current plays in our front page recs and at theatreinchicago.com.