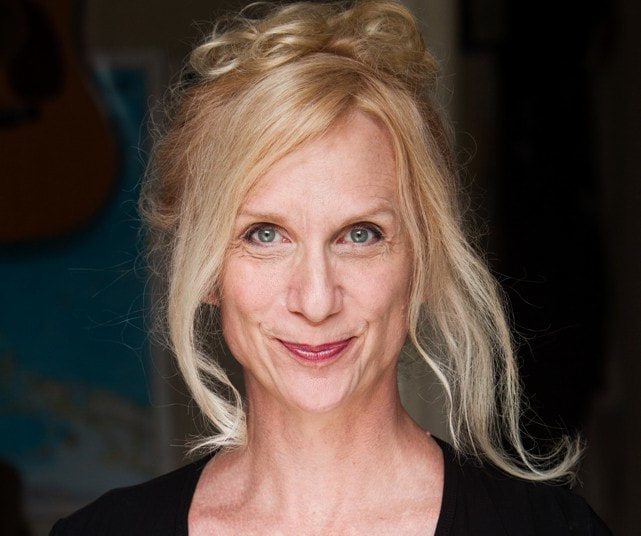 “I was kind of upset. You could tell there was not a transgender person within twenty yards of the rehearsal room”

Delia Kropp, one of Chicago’s preeminent transgender actors and advocates, is speaking of theatres trying to tell trans stories without actually consulting trans people. “What the directors usually say is ‘I have a friend of a friend.’ It isn’t enough.”

Kropp’s solution was to get theatre people educated, and talking about the challenges of representing transgender lives on the stage. “I was able to make a connection with the Goodman. They got all of the city’s theatres together at the Alice on 11/29/16 for a symposium on trans inclusion.”

Some companies have already acted on the issues brought up in that meeting, Kropp notes with pride—-treating talent better, always getting a trans person involved with the project, etc. “But my advocacy work now is about the stories being told about us. Get more trans stories told; get more trans people cast.”

Kropp’s own story began several decades ago, in the 1970s, long before she understood that she herself was transgender. The future actor/advocate started her career at Michigan State University as an Art History major, before she decided to switch to a different path. As it turned out, her first acting classes were with Francis Guinan, who would later become an esteemed Steppenwolf ensemble member. “He got me all excited about acting,” she says. At MSU she ended up triple majoring in Psychology, English, and Theatre, and then pursued graduate-level actor training over in England at the Drama Studio of London.

By 1985, Kropp found herself firmly ensconced in the Chicago theatre community, and for the next 30 years worked as an actor and director. But as a male artist, she never quite hit her stride. “Something always felt off.”

A number of personal and professional factors came to a head and in 2004 she started to experiment with gender. “I had no idea what transgender even was. Transitioning at 47 was weighted with a lot of confusion, a lot of shame,” she says, and it took awhile to get past it all.

So she “stepped away from the profession” in 2006, and a year later began her medical transition and counseling at Howard Brown Health Center. In 2011, Kropp officially changed her name and came out to the world.

It was another four years before she returned to the stage.

When curious about returning to the boards, former partner and fellow actress Penny Slusher helped her make some connections. One of these was the playwright Philip Dawkins, who’d just written a new play called Charm, the true story of Mama Darleena Andrews, a 67-year-old black transgender woman who teaches an etiquette class at an LGBTQ community center in Chicago. Charm centers on the notion of how the teaching of etiquette works in a world of terrible poverty and prejudice.

“Northlight Theatre was just doing its first reading of Charm,” Kropp recalls. “I read it and thought, wow, this really has merit to it! This cisgender playwright knows what he was doing.”

In 2015 things finally started to connect for Kropp. As Charm went through various drafts and readings, Dawkins starting mentioning Kropp’s name around. First, to About Face Theatre, for a staged reading there. And then to a new group, The Chicago Inclusion Project, where Kropp got involved with diversity advocacy.

These connections led to understudying for a new David Rabe play at The Gift Theatre. “Meanwhile, during this period, Pride Films and Plays producer David Zak brought me a new work. He said if we can’t get a trans person to play the transgender role, we are not going to do the play. That really impressed me. I ended up getting cast, and early in 2016 Raggedy And premiered at the Rivendell Theater space.”

Later in 2016 came Kropp’s acclaimed performance in I Am My Own Wife. That show had a very unconventional genesis. “I’d found so few great trans roles, I realized I’d just have to to make opportunities that otherwise wouldn’t exist.” This Pulitzer Prize-winning play was originally written for and performed by a single male, cisgender actor. Kropp submitted an original treatment to About Face Theatre, whereby a trans actor plays only the transgender role of Charlotte Von Mahlsdorf, with the other parts brought to life by various other cisgender actors. A test reading of this idea went well, so About Face Theatre brought the idea to playwright Doug Wright, and he green-lighted it. The production went up in November 2016 and became a critical success.

Still, the development of I Am My Own Wife underscored something that was missing in the theatre scene for Kropp. “That same autumn we rehearsed I Am My Own Wife, there were a slew of other plays being produced with trans themes or characters. But my trans friends didn’t even get calls or hear about them. No trans artists were involved, or at least, only marginally.” Ultimately, this inequity is what brought her into her current involvement with the world of advocacy.

She’s still performing, of course—she recently finished her first cisgender woman role as an army nurse in the musical “The Civility of Albert Cashier”—but her focus at the moment is in making the theatre world better for trans people.

Kropp is currently working on the beginning of a massive project that, she hopes, will be a huge help to trans people in theatre: a searchable database of all trans actors, designers, directors, etc. who work in Chicago that all theatres will be able to use.

“Right now this information is kept by each theatre, if it is kept at all,” she says. “What you mostly hear is that theatres can’t find trans people. “Charm, when it was first produced, didn’t have one TG person cast. There were no resources to find them. We’re going to change that.”

My overall idea is to have a website featuring a database of creative people who are gender non-conforming. We’re going to figure out what check-boxes to put in there for these people so that theatres will understand how to pull it out; e.g. genderfluid isn’t the same as trans. It’s going to be an educational effort as well as an informational resource. We’ll also have a big library of informational links about gender and gender in theatre. As well as some blogging (theatre people weighing in on productions).”

A database such as this will take many volunteers many months to put together, and Kropp is aware of this. “Right now I’m starting by looking for people who can code,” she says.

The Advocate, the nation’s leading LGBT newspaper, recently listed Kropp as one of eight actors who would be good candidates to replace Jeffrey Tambor in the award-winning television show, “Transparent.” She’s having none of that, though.

“It’s a nice thought piece, to demonstrate how many of us older trans women do actually exist in the world. But replacing Tambor is a fruitless idea for so many reasons and I’m 100% in favor of writing Maura out and moving on. If one needs a ‘trans parent’ for the title, let Ali continue her gender journey and have herself a baby.”

Kropp clearly lives by her ideals. She says that telling TG stories is the most important thing, bigger than any personal ambition, and her reaction here illustrates the point. The story of her life, her transition, and her career is inspirational for trans actors, but what may be even more inspirational is the time and energy she is happy to spend in order to benefit all in the trans theatre community who desire to find work. Without people like her, they might continue slipping through the cracks forever.