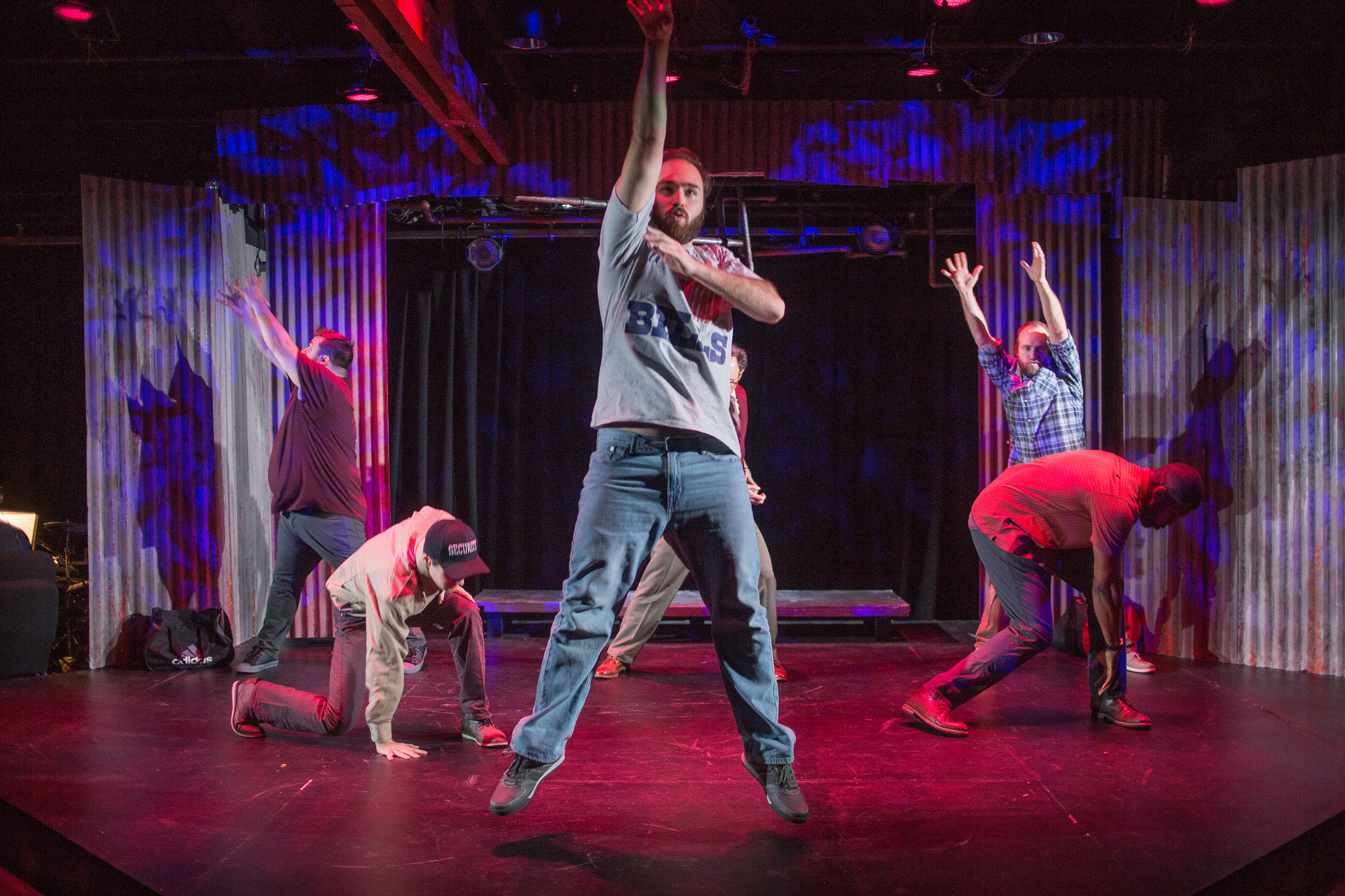 Theo Ubique ushered in its new era this week with the opening of both its new cabaret theatre and its 2019 season with The Full Monty, the fun and heartwarming musical based on the 1997 British film with a book by Terrence McNally and a score by The Band’s Visit’s Tony Award-winning David Yazbek.

The new space, while still extremely intimate, is significantly larger than the company’s old digs at the No Exit Cafe. For this opening show, the flexible space is arranged into a corner stage with a group of cabaret tables in front and risers near the back (which are, I can tell you, a lot more spacious and comfortable than they were at the old place). Director Fred Anzevino makes sure that, as it did at the No Exit, the company takes full advantage of the aisles and the empty spaces, bringing the show even closer to the audience.

The Full Monty, with its setting transferred from England to the Buffalo area, tells the story of a group of long out-of-work steelworkers who, desperate for a cash infusion, decide to put on a one-night-only strip show a la Chippendales. The fact that they are not good dancers and don’t have traditionally sexy bodies notwithstanding, their goal is to make enough money to get out of debt and help tide them over until they can find new jobs. Part of the show’s joy is watching these normal Joes strut their stuff, both before and after they manage to get choreographed.

Matt Frye stars as Jerry Lukowski, a broken man at the start of the play who owes his ex-wife (Anna Dvorchak) for back child support and is helpless as she threatens to take their son Nathan (Sean Zielinski) away from him. It’s Jerry’s notion to try the stripping angle, and he makes it happen with help from his best friend Dave (Nick Druzbanski), a man who can’t even imagine himself stripping because he is overweight. Still, the men are sick of being treated as “scrap” and ready to try just about anything. The other members of the six-man stripper crew are Joe Giovannetti as Malcolm, a young gay man who’s empty life features taking care of a dying mother; Neil Stratman as Ethan, a clumsy guy whose main contribution is his enormous, um, asset and Stratman’s penchant for physical comedy; Marc Prince as Horse, the one guy there who actually can dance, whose song “Big Black Man” is a showstopper; and Jonathan Schwart as Harold, their former boss who is now in as bad a condition as any of them.

Each of these actors brings strength and pathos to his part. Frye’s Jerry’s anger at the system that created this disaster is palpable, as is his deep love for Nathan, which he sings about in “Breeze Off the River.” Druzbanski stays away from any camp as the fat guy and instead offers a touching, sweet performance that highlights his character’s lack of self-regard and his love for his wife (Molly LeCaptain, who herself is excellent as the woman whose beloved husband is falling apart and she can’t find a way to stop it). LeCaptain is brilliant in songs like “It’s a Woman’s World,” which she sings with Emily Barnash, Tyler Symone, and Janyce Caraballo. Barnash also gets a big showy number in a song called “Life With Harold,” as she sings of her love for her husband, who has not told her about the factory’s closing even after months. So does Kate Harris as the seen-it-all keyboardist Jeanette. John Cardone also has a strong opening dance number as a real stripper.

This is a show that sadly still seems to be timely: with major corporate consolidation and bankruptcies and significant layoffs at places like GM, the number of people suddenly out of work in America continues to climb. But the show is more about the emotional toll that being out of work takes on the men, especially when their women, who by and large work in offices, still have jobs and even, in some cases, could hire them if their egos could take it. It is a show that wears its heart on its sleeves with songs like “You Walk With Me” and “You Rule My World” and a show that is not afraid to celebrate a gay relationship even among these macho men. (That Jerry can do so is an evolution of his character, who is clearly homophobic in the play’s first scenes. Frye handles this early character flaw well, making it clear that his disgust is more about his own frustration than about the stripper’s orientation.) In a lot of ways, it’s a show about six guys stripping that places more emphasis on its quieter moments than on its showy numbers like “Michael Jordan’s Ball” (here done with mimed basketballs) and “Let It Go” (not that one), though they are all well done and fun to watch thanks to choreographer Sawyer Smith.

The Full Monty is, overall, a strong opening outing for Theo Ubique in its new home, though there may still be a few kinks to work out. There were a few technical difficulties with sound and lights at the press opening, but I’m sure they will be resolved quickly. One thing that wasn’t a problem was Bill Morey’s costumes. In a show featuring strippers, you can imagine some emphasis is placed on this, and Morey’s perfect tear-away clothing is as on point as anything in the show. It will make you smile and cheer, and that is ultimately the reaction that this sweet, fuzzy musical wants.

The Full Monty is now playing at Theo Ubique, 721 Howard St, Evanston until Jan 27. Check the website for specific dates, times, and tickets. Find more information about current plays in our front page recs and at theatreinchicago.com.