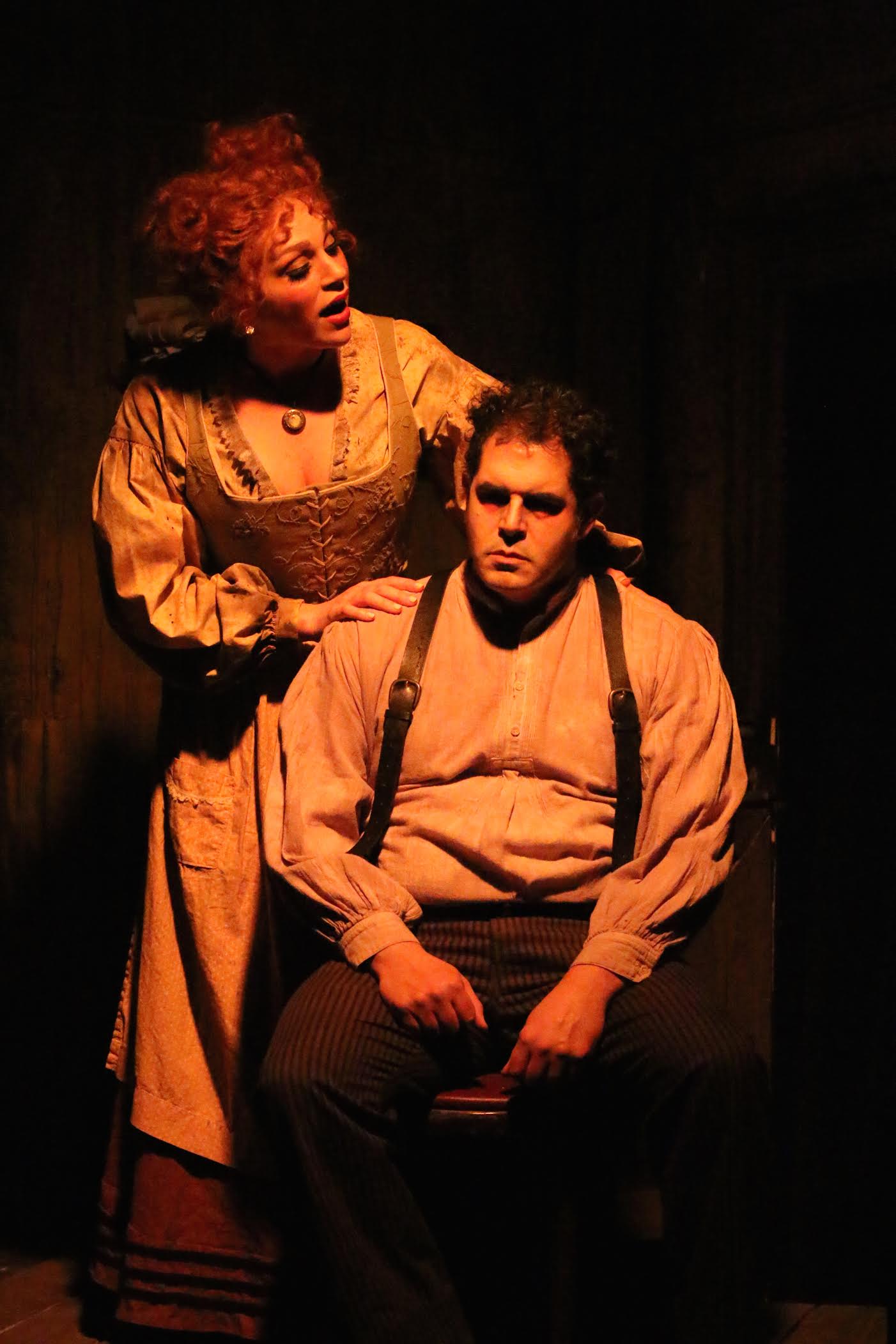 Sweeney Todd, the Demon Barber of Fleet Street contains what some (including me) feel is the best score ever written, a score that makes tremendous demands on its performers. If even one of the leads underwhelms, the entire show can break down. That’s why it makes me happy to report that Theo Ubique’s new production has gotten the casting so right that I’ve rarely seen or heard a better ensemble than this one perform the play. I have seen productions with a weak Joanna and a nondescript Anthony, even one with a less than adequate Sweeney. This one has no weak links. From the powerful vocals of Philip Torre’s Sweeney to the perfect operatic soprano of Cecilia Iole’s Joanna to the wonderful Jacquelyne Jones as Mrs. Lovett to one of the best Anthonys I’ve ever seen in Nathan Carroll, this play’s actors are not only up to the tasks, but excel. The result is an eminently watchable Sweeney Todd, one that should stay with viewers for a long time. 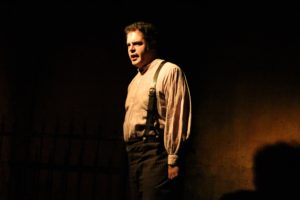 The plot of the play involves Todd, a barber secretly returned from a lifetime banishment to Australia to exact vengeance upon the judge whose illicit desire for Todd’s wife Lucy led to his condemnation. Returning to Fleet Street, where he once had a shop, he discovers that the judge (a crafty, malicious man portrayed by the tall Voldemort-like John B. Leen) raped his wife, who subsequently swallowed arsenic, and that his daughter Joanna has been living with the judge for all of these years as his ward. Todd and the sociopathic Lovett, his landlady, find a way to make bodies disappear and solve her desperate need for meat supplies at the same time. Meanwhile Anthony, a young sailor who rescued Todd at sea and helped him get home, meets and falls in love with Joanna, and an insane old beggar woman (Megan Elk) senses that something is terribly awry at the pie shop and insinuates herself into the lives of those who work in the building in an effort to prove it. 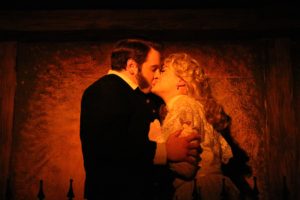 Torre is superb in the title role. His imposing physical presence and angry baritone are precisely what the part requires, and from the moment he steps onto the stage he commands our attention. Jones matches him step for step: her wonderful facial expressions (watch for the moment when she realizes people can be pies) and eager, lovesick characterization are a great foil for the rigidity of her intended lover. Carroll, whose voice is full of range and dynamics that add to the beauty of songs like “Joanna” and “Ah Miss,” plays Anthony as far more than just the one-dimensional Romeo-wannabe that he too often ends up. In Carroll’s hands the character comes alive; from the first scene where we meet him and Todd, he possesses a clear sense of self that allows his instant love to be more believable. As for Joanna, Iole distinguishes herself not only by the stunningly beautiful vocals but also by her ability to convey the many different and often extreme emotional states of the character. In addition to these, both Leen’s judge and Kevin Webb’s beadle bring on the slime in their own ways: Leen with his slithering portrayal of evil and Webb with his calm, less intrusive one. A highlight involves Webb’s rendition of “Sweet Polly Plunkett” in which the actor lets out his full repertoire of comic mannerisms to further define the corrupt but ineffectual beadle. 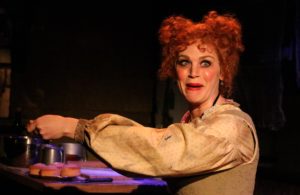 The No Exit Cafe, where Theo Ubique has performed for fifteen years (they move into a new home on Howard Street next fall), is a tiny, intimate house. That fact alone makes this production of the musical different from those that take place in larger proscenium theatres. Director Fred Anzevino uses the space brilliantly, moving actors around and through the audience to supplement a Ben Lipinski stage design that manages to provide separate homes for Todd’s barber shop and Mrs. Lovett’s pie shop even in this small room, cleverly utilizing the existing bar as part of the set. Anzevino has performers work in every conceivable location within the house, at times circumscribing the audience, at others hastening to make circuits through the audience and around its periphery, even interacting with the audience at times. It all makes for a cozy show with actors often right next to patrons, and that of course makes the show feel that much more personal. We are right there with Todd and Lovett as they hatch their plans; we are surrounded by escaped mental patients; we are up close and personal with Anthony and Joanna as their love blooms and so tight with young Toby, a street urchin working with rival barber Pirelli (Ryan Armstrong), that it is easy to observe Frankie Leo Bennett’s strong portrayal of the emotionally fragile boy as he descends into madness. In short, we are not merely adjacent to the action as in larger houses; we are in the middle of it.

All of this is ably assisted by a wonderful lighting design by James Kolditz, who bravely and effectively uses darkness as a major tool, fading subtly in on players and perfectly highlighting the various locations on set. His bright, cheerful light introducing the beautiful Joanna is as well-rendered as the eerie orange-red baking room that ominously calls our attention to the dark deeds performed there. Throughout the play his often dimly lit zones help create the mood impeccably. It is also enhanced by the decision to use zombielike makeup on all of the ensemble and most of the main players. No one is listed in the program as makeup designer, an oversight considering the weight that makeup brings to the play. Jeremy Ramey is listed as Music Director, and the haunting score is played beautifully by his four-piece orchestra that provides all of the emotional power of the larger ones usually found in productions of this musical.

Theo Ubique’s Sweeney Todd is an unforgettable, captivating production, one of the best you’ll see of a play that somehow seems to work even better in small scale than it does in large scale. Though the propinquity of the setting forces some concessions (an unseen furnace and a far less elaborate than usual barber chair chief among them), it more than makes up for this in the intimate connection of performers and audience. I simply believed this production more than most I’ve seen of this show, and that’s a high compliment.