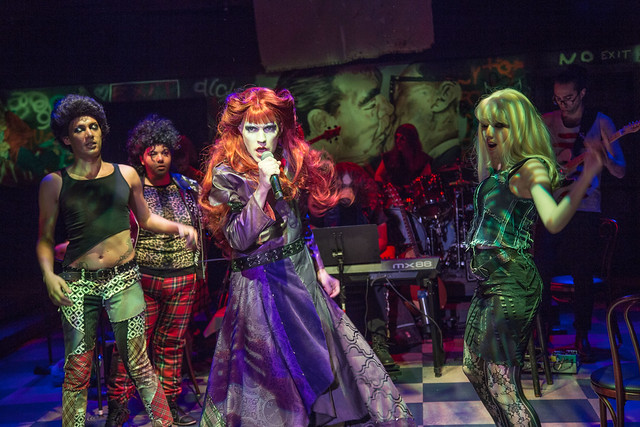 John Cameron Mitchell and Stephen Trask’s Hedwig and the Angry Inch, now playing in Theo Ubique’s new theatre on Howard Street, is funny, poignant, crude, and never anything less than enjoyable. From the moment when punk rocker Hedwig enters the stage dressed as a kind of Pride Month Statue of Liberty (all sorts of kudos to costumer Robert S. Kuhn), it’s obvious that this is not going to be a typical musical. In fact, it is presented as a rock concert during which Hedwig, talking as much as she sings, tells the audience the story of her life. (Much of the music, by the way, is loud, but Theo Ubique offers earplugs; I did not find them necessary.)

Will Lidke stars as Hedwig, a former East German boy named Hansel whose desperation to leave that forlorn country leads him to have an ill-considered sex change operation in order to marry an American soldier. Unfortunately, the surgery is “botched,” leaving the now at least nominally female Hedwig to live not with a vagina, but with a small mound of protruding flesh she calls her “angry inch.” The Hedwig we see at this concert is the result of many years of cultivating a persona as a punk rock singer: a defiant, flamboyant, genderqueer performer with a need to be seen and acknowledged by the world.

The world, instead, has made a pop star out of Hedwig’s protegé Tommy Gnosis (among the characters played by Jacob Gilchrist), whose first gigantic hit album features mostly songs written by Hedwig. Jealous and outraged that Tommy has given her no public credit for helping to make him a success, she and her band (also called the Angry Inch) tour America in the shadow of Tommy’s sold out performances. In Chicago, we discover, he has a concert at Wrigley Field at the same time as Hedwig has scheduled a show at this tiny theatre in south Evanston. Several times during the musical, we catch moments of Tommy’s show outside an open door, much to Hedwig’s consternation—theatrical license having eliminated the distance between Howard and Addison Streets.

Along with having a truly rocking band—this one led by Jeremy Ramey—any production of this musical is dependent on the actor playing Hedwig, and Lidke is excellent. Fueled by his never-ending energy and strong voice, Lidke’s Hedwig, a blend of neurosis and narcissism, occupies a narrow space between telling the story of her life, surrendering to the power of the music, and having a complete breakdown. Director Toma Tavares Langston gives his lead actor every opportunity to create this memorable, half-broken character, and Lidke doesn’t disappoint for an instant.

Playing off of him, Brittany Brown plays Yitzhak, the Jewish former drag queen who is Hedwig’s second husband. Brown vividly makes it clear that Yitzhak has become frustrated with being taken for granted by Hedwig. At one point, the star goes through the typical rock concert moment of introducing her band, but pointedly ignores Yitzhak, with whom she has been having a silent feud throughout the entire show. With few lines (other than those she sings), Brown conveys all of this barely pent-up emotion mostly through body language and facial expressions, and is extremely good at it.

In addition, several minor roles are portrayed very well by “background singers” Gilchrist and Adriana Tronco, but this is Lidke’s show. Whether schizophrenically (and comically) portraying both ends of a conversation with Tommy, enthusiastically whirling around a dance pole, jovially ad-libbing with the audience, or just rocking out while baring his character’s soul, this is a completely outstanding performance. Though Hedwig’s gestures can be very crude and some of her jokes obliterate the line of decency, that may actually be part of the point: this is a woman who simply doesn’t care anymore what others think of her; she isn’t even sure what to think of herself.

I did have some quibbles with the show. Brown in no way can pass as a man, which does make her character rather hard to process and detracts from Yitzhak’s later coming out. The wonderful animations that usually feature in this show, especially during the song “Origin of Love,” are missing or severely truncated. And although he is clearly placing all of his emphasis on Hedwig, which is logical, director Langston too often places Lidke deep on the sides of the recesses beside the band, rendering him invisible to large chunks of the audience. These things aside, though, his Hedwig is certainly a winner, and the small space suits it better than the massive theatres the touring company plays in. It will rock you to the depth of your soul, make you laugh, and threaten to break your heart. An interesting and unusual selection for Theo Ubique, Hedwig and the Angry Inch is a brilliant cap to their inaugural season in their new Evanston home.

Hedwig and the Angry Inch is now playing at the Theo Ubique Theatre, 721 Howard St, Evanston through July 28. Check the website for specific dates, times, and tickets. Find more information about current plays in our front page recs and at theatreinchicago.com.