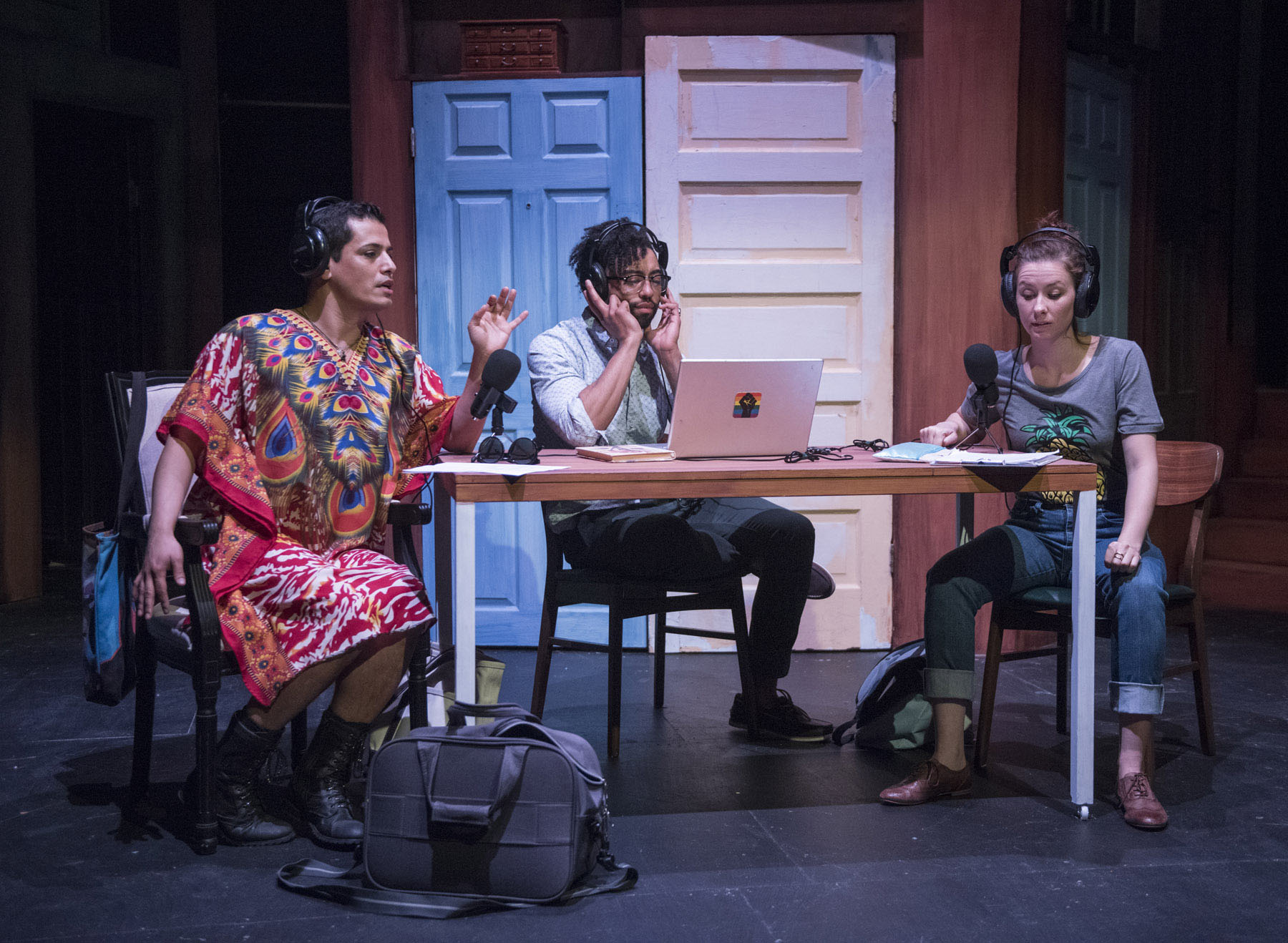 “We hold inside of us a history that ends in an ellipsis.”

That statement from late in About Face Theatre’s midwest premiere of R. Eric Thomas’s Time Is On Our Side pretty much sums up both the play’s philosophy and its central mystery. We all have holes in our individual, family, and societal histories, things we don’t know about parents, siblings, grandparents that, if known, might change our points of view. One question the play poses is whether we really want to discover what those things might be. Others have to do with LGBTQ history and even the millennials’ reliance on social media. (This is a play that references everything from Harriet Tubman and Rosa Parks to Jeopardy and Facebook with equal relish.) After a rocky start, Time Is On Our Side finds a way to answer these questions in a thoughtful, impressive second act that will stay with me for a long time. 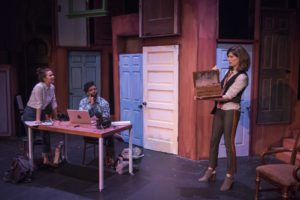 Thomas’s plot revolves around a couple of Philadelphia friends whose shared podcast covers lesser known aspects of the city’s history, especially its queer history. The two seek to uncover truths about stops on the Underground Railroad, the unknown past of gay bars (an oft-repeated line in the play has it that the basements of gay bars are virtual treasure troves of secret gay history), and, ultimately, the more personal past of one of the two, Annie (played by Maggie Scrantom). This comes about after the accidental discovery of her grandmother’s secret diary, which appears to hint at a lesbian affair.

One of the problems with Act One is that Thomas spends most of it developing a fairly artificial conflict between Annie and Curtis (Rashaad Hall), her podcast partner. Goodness knows that there are enough real conflict points he might have developed—an early indication that they are having money problems or that Curtis wanted to do an NPR report about Annies’ politician grandfather come to mind—but instead he opts to focus on the notion that she simply doesn’t want to know about something that might fundamentally alter her memories of her grandmother. This might seem reasonable except for the fact that Annie is also a lesbian (all of the characters here are gay or lesbian) and, more logically, should want to know this about her ancestor. Goodness knows that if I uncovered information that suggested that one of my grandparents was transgender, I’d be all over it. I’d want to explore the role that biology played in creating me. But Annie, for no discernible reason other than that she doesn’t want to, not only refuses but orders Curtis to stand down as well. It’s a wholly artificial conflict that the play did not need.

Act One was already interesting enough with the inclusion of Claudia (Riley Mondragon) and Rene (Esteban Andres Cruz), a pair of very self-possessed queer voice actors who help with the podcast’s historical re-enactments. Through them, we see much more flamboyant characterizations of LGBT people: Claudia is bristling with energy to expend and knows everyone around her, while Rene is a fabulous queen in a colorful “half-caftan” who refers to himself as “she” and clearly is enjoying life. Compared to the more sedate Annie and Curtis, these two are at the opposite end of the rainbow, and they add color and comedy to the first act while the central mystery is taking shape. 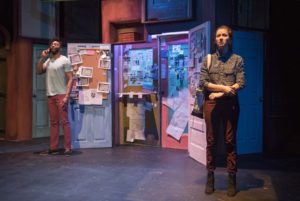 In Act Two, Annie decides to hunt for truth herself while Curtis is hunting clandestinely himself in the hope that she’ll agree eventually. Their searches lead to two older gay men who lived through the 1960s and 70s gay revolution and also knew Annie’s grandparents. Cruz’s Prentis is quiet and alone, still mourning his lover’s death years ago, whereas Mondragon’s much more eccentic character, like Claudia, is the life of every party he can find. Through conversations with these two aging gays, the main characters begin to learn not only about their mystery but (perhaps ironically, given their podcast’s focus) about a history of gays in America of which they were unaware. Act Two is rich in philosophy and discovery and leads Annie and Curtis to far greater understanding of themselves.

The set of this play, designed by José Manuel Diaz, is brilliant and symbolic. Consisting of 22 doors and a single window, it is most clearly an invitation for the audience to “come in.” That the window holds a candle, reflective of how stops on the Underground Railway made it clear to freedom seekers that they had found the right house, furthers this symbolic aspect, and Claire Sangster’s inventive lighting, which highlights many of the doorways from behind at key moments and sheds light directly on a couple of key props from unusual angles, adds to the impact. Add to this a sound design that makes extensive use of the Chamber Brothers’ “Time Has Come Today” and memory voiceovers of lines already heard earlier in the play, and you have a design team that adds dramatically to the play’s message in overt ways not usually noticeable but here very welcome. 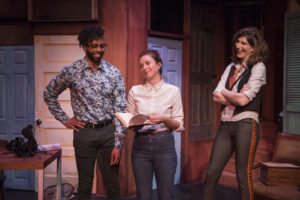 Directed by Megan Carney (About Face’s Artistic Director), the play is at once hilarious and thought-provoking. Her actors’ performances are superb. Scrantom and Hall make us care for their characters as human beings even if they are acting in less than perfect ways—Annie with her anger at Curtis and Curtis with his obsession with Annie’s grandmother’s story. There is also much in here about Millennial culture, starting with the podcast itself but extending to the dialogue, the cadences and idiosyncrasies of which Thomas recreates perfectly (“I can’t with him”). In addition, there is the Millennial obsession with technology—the point is made clear that this is the first generation that takes Google and Facebook, for example, for granted. There are also echoes of the vaunted Millennial egotism: all four young characters are quite self-absorbed, and Annie’s journey asks her to begin to understand that her grandmother’s story is not her story even though it affects her. And by taking us on a trip to discover that story, Thomas highlights the fact that Millennials, as he has one character state, often take the lives they are living for granted. Annie’s discovery of her grandmother’s struggle helps her to appreciate her own life more as well as the fact that others had to work hard and suffer to make it so easy for her to be herself.

Time Is On Our Side is an intriguing play. I found myself after the first act wanting to like it more than I did like it due to the artifice of the conflict, but Act Two more than redeemed it. It is a provocative, fascinating look at the world as our young people see it and as the older generation lived it. And it is ultimately easy to recommend.

Time Is On Our Side, presented by About Face Theatre Company, is now playing at Theatre Wit,1229 W. Belmont Ave. in Chicago, until April 7. Performance times vary; check website. Tickets are available from Lifeline Theatre. Half-price tickets are available. Find more information about current plays on our Current Shows page and at theatreinchicago.com.