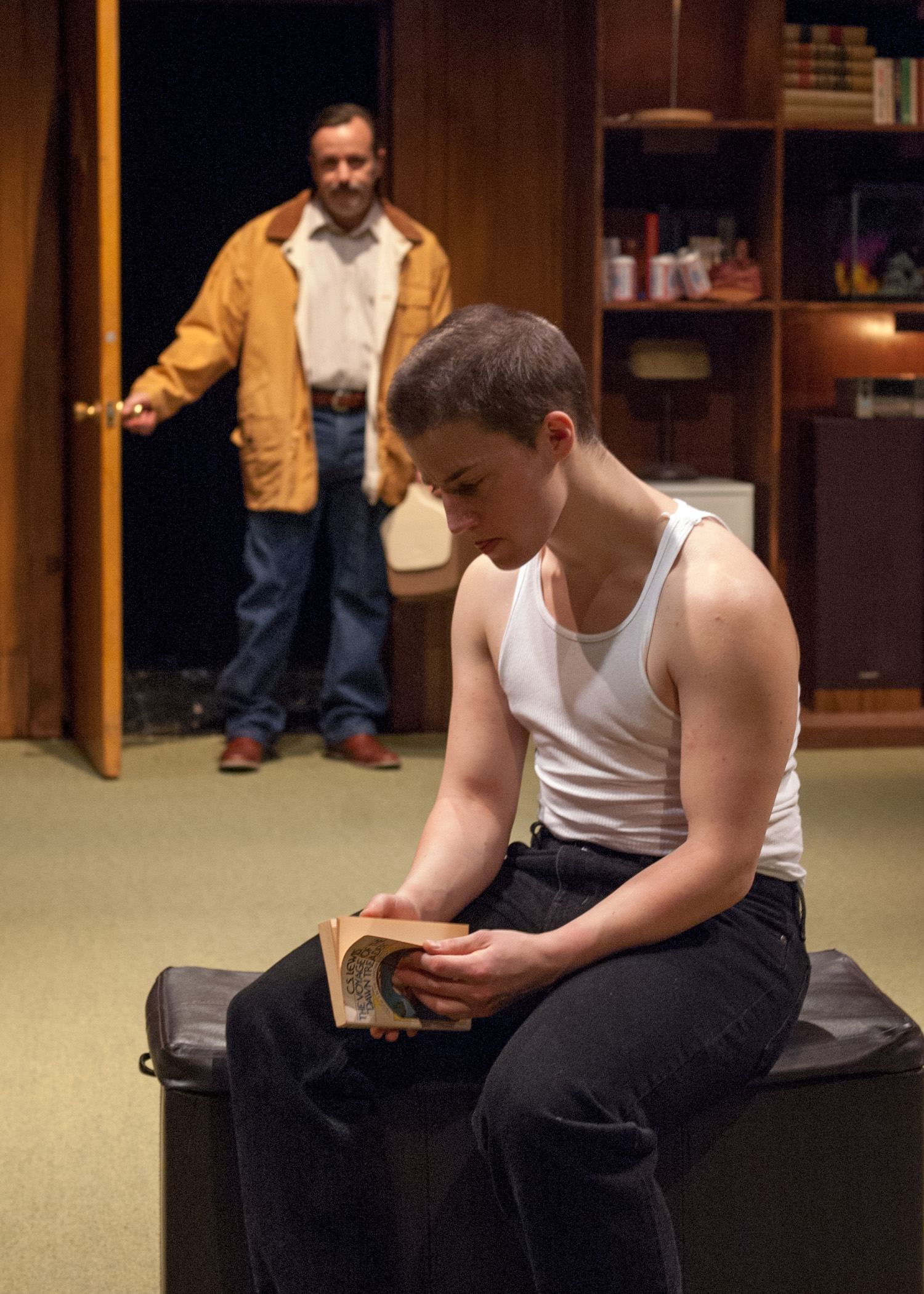 Timeline Theatre's newest production, Anna Ziegler's Boy, is a lot of things. It is an account, albeit highly fictionalized, of events that actually happened to a child with mangled genitalia who, as a result of the recommendation of a famous gender doctor, was brought up as a girl. It is the story of a family torn apart by that decision. It is the (much softened) account of the relationship that a child builds with a therapist. It's the story of what happens when that therapist lets you down, when it turns out that he may have cared more about his own faulty theories than about your well-being. It is a tale of a cis boy brought up as a girl because of those faulty theories who ultimately fails so badly at being a girl that he returns to being a boy. And, perhaps most important of all, it is the story of how that boy overcomes the pain and falls in love.

It succeeds wildly in all of these things: the brilliantly acted Boy is one of the true joys of the new year.

Ziegler altered so much of the story of the real David Reimer, whose genitals were mangled during circumcision in 1972, that a lot of the real horror of the story is lost here. The gist is here, though, along with the pain: the desperate parents seeking help from a self-aggrandizing gender doctor with the controversial theory that gender is "malleable" until age two or three, the boy being raised in a hyper-feminine environment and not being told of his male birth, his struggles in school and at home, and his eventual re-transition to male shortly after learning the truth at age fourteen. Ziegler has softened it though: her motive here is not to excoriate Dr. John Money, the famous doc here called Dr. Wendell Barnes, for his actions but to focus instead on the child, who in real life was known by the pseudonym "John/Joan" and here goes by Adam. 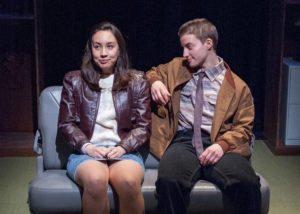 It is on Adam that the play focuses: he is a part of every scene; every moment is either with him or about him. Ziegler wants us to be able to understand this boy to whom the unthinkable happened. To that end, scenic designer Arnel Sancianco places these scenes at either end of a huge empty space (the emptiness perhaps symbolic of the unconstructed gender of Money's/Barnes' theories?) between two enormous wall units packed to the gills with memorabilia of lives lived. At one end, up to shoulder height, properties designer Archer Curry's memorabilia represents Adam's current home as a young man without a past: some books, a fish tank, a Star Wars poster. On the other, to the same height, we see Dr. Barnes' office and its framed degrees, etc. Above them both, though, is where the fun begins: on both ends, the dozen transgender members of the cast, crew and staff have placed pieces of their own lives—a dollhouse, a light-up ice cream cone, a truck, a carefully drawn "Welcome" sign—individually lit up sporadically pre-show by lighting designer Jared Goodling and meant to evoke random moments of a childhood that any trans person will tell you pack a whole lot more meaning than they probably should. When your memories don't look as you think they should have, everything has more meaning.

Theo Germaine, a non-binary trans actor making their Timeline debut, plays Adam and his alter-ego "Samantha" at various ages as Ziegler's script drifts in and out of time, showing us elements in the sequence she chooses rather than in anything like chronology. The power of Germaine's performance can't be understated. Both as Adam and as Samantha, they have to uncover strong binary forces within themself to play the role. In Adam the primal love and hate seek balance, as the young man struggles with what Dr. Barnes (David Parkes) and his parents (played by Mechelle Moe and Stef Tovar) have done to him at the same time as he is trying to lay the foundation of a relationship with Jenny (Emily Marso), a girl "Samantha" once knew in school. As Samantha, Germaine not only has to channel their inner child (done with voice, mannerisms and physical contortions) but somehow evoke simultaneously both the bond "she" is feeling with Barnes and the pain "she" is unwilling to express to him. It's a remarkable performance. 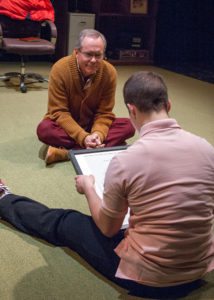 The relationship between Barnes and Adam takes place entirely in flashback, through sessions when young "Samantha" was in grade school. Money's motives in real life may have been suspect, but it's clear that Ziegler wants us to see in Barnes a man who truly believes he can help this family. The bond he establishes over time with "Samantha" is, at least from his perspective, real, and Parkes shows us that he clearly feels that it is reciprocated. When he discovers, later in the play, that the child was lying to him all along (out of fear or a need to please) and that "she" was never comfortable as a girl, he's beyond devastated: he simply can't even believe it. Confronted by an adult, normalized Adam he has never met ten years after their therapy sessions ended, Barnes is utterly broken by the revelation that he was wrong about so much, and Parkes' performance creates real sympathy for this man who has ruined so many lives. 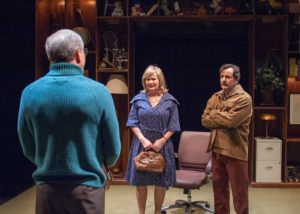 Not so difficult to understand is the relationship Adam has with his parents. Moe plays Mrs. Turner as a loving, caring mother who, confronted with something no one should ever be confronted with, makes a bad decision for an understandable reason. There is no point in the play in which she is entirely comfortable as the creeping realization sets in that something is terribly wrong with her child, who is skipping school and getting into fights and failing subjects. Still, it rings true when she says later on, while adult Adam is visiting, "Sometimes I miss her." It's that maternal bond, the connection that never leaves despite all of the pain, that Moe shines in delivering. Meanwhile, Tovar's father is gruff from the beginning, as if unable to process an accident that has stripped his son of his manhood and even more unable to contemplate turning a boy into a girl. His broken-down character—a man who can't hold a job, who drinks too much—cannot seem to find a way to spend real time with "Samantha" despite constant chiding by Barnes to do so. For a long time, it's a thankless role, as Ziegler gives Doug Turner little to do until late in the play, but when Tovar is allowed to let loose, he is ready. A couple of late scenes really let him put his mark on the play.

But the central figure in Adam's life right now is Jenny, and that says a lot about the focus Ziegler wanted. This is not the David Reimer story (which ended tragically, with the suicides of both David and his twin). This is a story about overcoming overwhelming odds. And from their first adorable scene together, Germaine and Marso simply project a chemistry that tells you they'll somehow be together in the end. Perhaps it is the symbolic appearance of a poem by Leigh Hunt in Dr. Barnes' office, a poem that Adam reads aloud twice during the play:

Jenny Kiss'd Me
Jenny kiss’d me when we met,
Jumping from the chair she sat in;
Time, you thief, who love to get
Sweets into your list, put that in!
Say I’m weary, say I’m sad,
Say that health and wealth have miss’d me,
Say I’m growing old, but add,
Jenny kiss’d me.

We've already seen them meet when Barnes has "Samantha" read that for the first time. It feels like fate. But there are a lot of scenes (and a lot of frustration, confusion, anger, and some silliness too, to be played wonderfully by Marso) before there can be any real payoff.
Director Damon Kiely certainly had a lot on his plate with this one. Just keeping all of the time-shifting straight is an accomplishment, as well as moving so effortlessly between so many different scenes on a stage on which all furnishings have to be brought or pushed on through one of two hidden end doorways. But it is not only Adam/Samantha who is time-traveling in these scenes. Every character except for Jenny (whose arc runs pretty straight and confined) spans more than two decades of growth and/or dissolution. Directing this play wasn't simply about helping actors to find a character; it was about helping to create the variances those characters would have over such a period in time.
There is a certain amount of irony that Boy might be the best transgender play to hit Chicago in a long time, since Adam is not trans. Nor was David Reimer. Neither is even intersex. The thing that caught Dr. Money's attention about the Reimer case was that the victim was a cis male and a twin: he had the chance to prove his theory once and for all. When Reimer was only five years old, Money published the results as an astounding success story, making himself a gender clinic icon. Even when he discovered later that it was all a lie he did not publish a recantation; that took Reimer himself, upon discovering the whole thing decades later. So this play based on a tale of a cis boy is the best thing going for trans and intersex people in Chicago. Why? Simple: because he is a cis boy. Money was right about one thing: his being cis and a twin was very important. And it did prove something beyond the shadow of a doubt. It proved that all the nurture in the world won't change what nature made us. We are who we are. Gender is in fact innate and fixed. And in this version of the story, Adam is left in a happy place. Why not? For the first time in his life, who he is on the outside aligns with who is in on the inside and who he loves loves him back; what more could anyone want from life?

3 thoughts on “Timeline’s “Boy”: A Poignant and Important Love Story For Our Era”