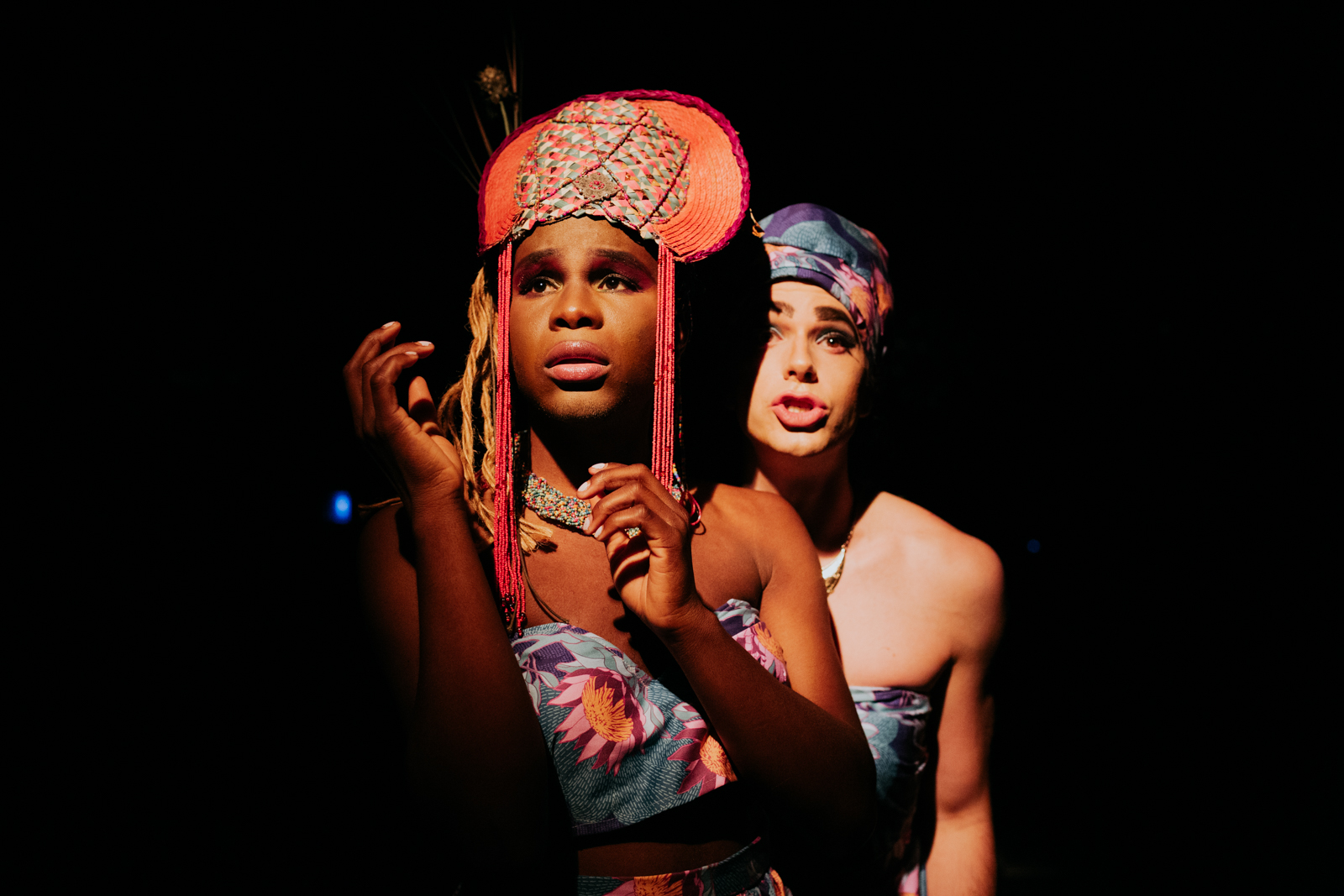 The Story Theatre’s mission statement tells us that they “believe deeply in the grey area of life, in the complications and nuances inherent in each person, situation, and conflict.” That credo goes a long way toward explaining the company’s latest production, the world premiere of Terry Guest’s two-hander At the Wake of a Dead Drag Queen, which definitely presents a complicated character with plenty of nuance in the author’s strong portrayal of Courtney/Anthony.

From the start of this contemporary tale, it is clear that it is not going to be some morbid play about death, though Courtney is very clear that she is, in fact, dead, a victim of complications of AIDS at the age of 23. (The characters use both male and female names, so I will follow suit, adjusting my pronouns to whichever gender is appropriate.) But At the Wake is, as much as possible, a celebration of life. Alyssa Mohn’s set is not a funeral home but the stage and dressing room of a drag club in Georgia, the audience of which is played by…us, as a huge mirrored wall reflects our faces to the drag performers. The set’s single visual reminder of the “wake” aspect is a photo of the deceased, which is summarily wiped away only a few minutes into the show.

The play is not all joyful drag performances, either, though there are several of those from Guest and The Story co-Artistic Director Paul Michael Thomson as Vickie/Hunter, a co-worker with whom Courtney/Anthony falls in love but holds at a distance. Anthony does not let people in very easily, and the outgoing persona of Courtney is pretty much the only way he relates to the world. Vickie serves the same purpose for Hunter, though he is far more open about his emotions, latching onto Courtney as a mentor as well as a would-be lover.

As Courtney, Guest interacts playfully with the audience and—as long as we can see it as a “performance”—is bright, cheerful and charming. In the dressing room with Vickie, though, something deeper and more introverted comes out, exacerbated by the illness that Anthony has been fighting (though almost all of the scenes we are shown occur before the disease really gets hold).

This is a play that deals with the ways in which we define ourselves to the world. Their drag personas, intentionally larger than life, allow Anthony and Hunter to handle some of the issues they both face being gay in the South, along with Anthony’s additional complication of the perception of homosexuality in Black culture. The dramatic scenes between them in Guest’s script don’t sugar-coat either this or their shared status as HIV+, but they never devolve into melodrama either.

Director Mikael Burke, along with lighting designer Kyle Cunningham and sound designer Sam Clapp, keeps the action moving and the many changes in location and chronology clear. And costume designer Uriel Gómez seems to have rounded up every glitzy gown in Chicago, and production designer Racquel Postiglione created a marvelous headpiece for Courtney to don during a story about African goddesses. Guest and Thomson give performances that are at various times both showy and subtle. This play is clearly a labor of love for all involved.

At the Wake of a Dead Drag Queen opens The Story’s second season with style. This is a small company that is not afraid to take risks, as evidenced by last year’s Leave Me Alone, and now, as a resident company at Raven, they have a wonderful house to perform in. If Friday night’s enthusiastic sold-out audience is any indication, this company is doing things right. The play’s brief three-weekend run is its only major drawback; catch this impressive, appealing production quickly before it disappears.

At the Wake of a Dead Drag Queen is a production from The Story Theatre now playing at Raven Theatre, 6157 N. Clark, Chicago through Sep 22. Check the website for specific dates, times, and tickets. Find more information about current plays in our front page recs and at theatreinchicago.com.