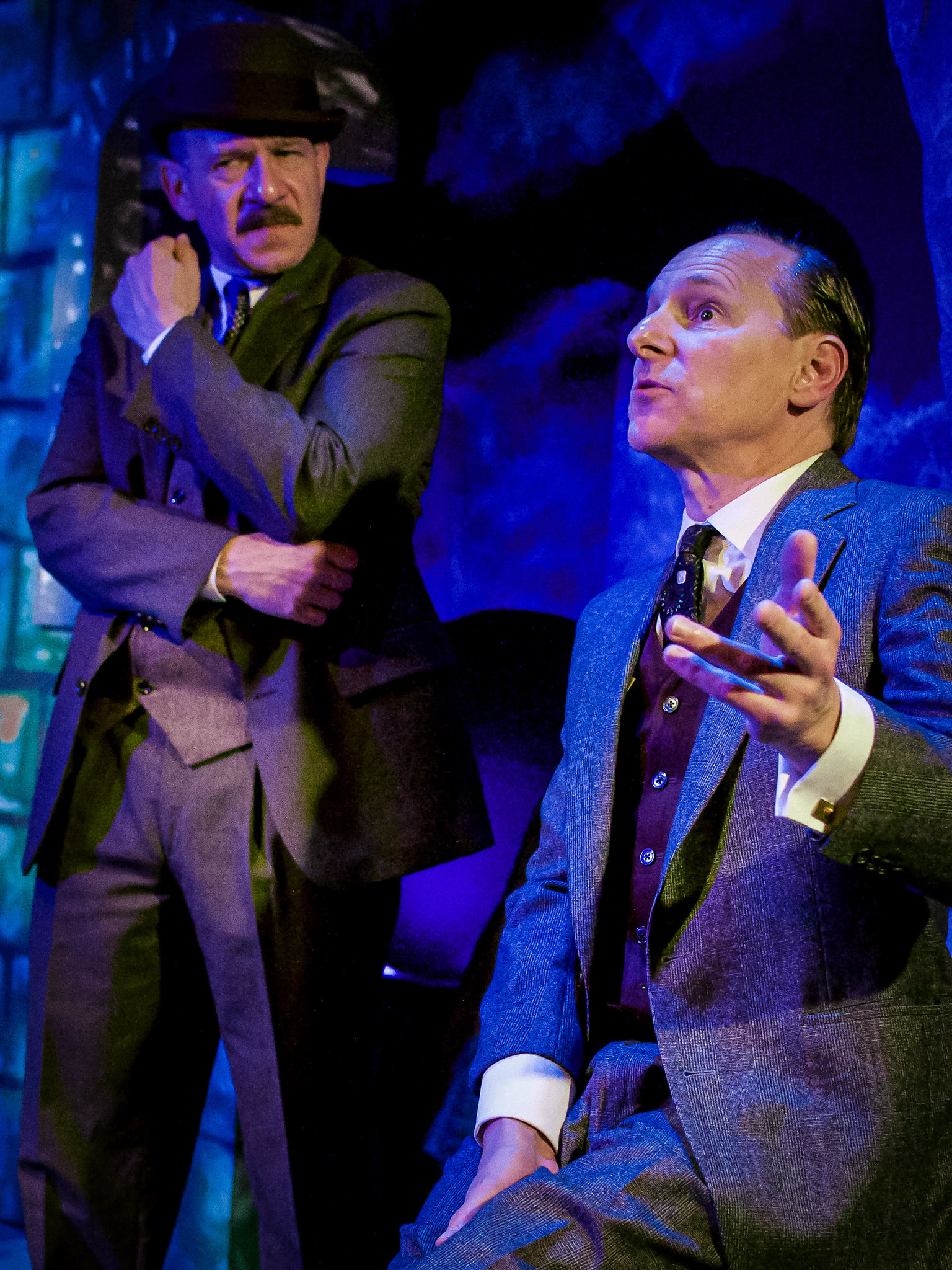 One of the problems with adapting any of Arthur Conan Doyle’s Sherlock Holmes stories for the stage is that they are not inherently theatrical, as they are told through the perspective of Dr. Watson as he “recorded them” and they sound much like the character: calm, reflective, and very British. The best versions of Doyle’s stories get past that by focusing not so much on the narration but on the character of Holmes himself or on the interesting, twisting plots of the pieces. However, that is not the tactic Terry McCabe uses for his CityLit adaptation of probably the most famous Holmes case, The Hound of the Baskervilles. Instead of giving us the wonderful melodrama of the novel, McCabe oddly chooses to focus on the narration, which leaves us with a strangely static production that does little to inspire the emotional experience of Doyle’s story. Instead, we get the drawing-room drama version of the tale.

Not that Adam Bitterman, who plays Watson, isn’t up to the challenge: he’s tremendously effective at embodying the famous sidekick of the famous detective, as far as the adaptation allows him to. Watson’s backstory, which is what makes him interesting, is entirely eradicated here, but his intelligence remains intact. His narrative is forceful and clear, but his speeches are so literary that this play at times feels like a Shakespeare performance bereft of everything but the soliloquies. They may be golden poetry, but more is needed than lovely words spoken directly to the audience. Bitterman’s portrayal of Watson (who is the main character here) adds to the issue: he is a wonderful performer doing everything he can to grab and maintain our interest, but the script rarely gives us a glimpse of emotion, even in this dark tale that has him descend into mysteries that appear to be possibly supernatural.

Holmes won’t help much in that regard: though James Sparling has the unerring detective down pat, and we are treated to a couple of examples of his deductive prowess, the character as written is not a very demonstrative one. Sparling does allow Holmes to become amused or even bored on occasion (because he is always so many steps ahead of the other characters that they almost seem to be floundering in the dark), but these are quiet emotions that don’t generally alter the play’s too calm and cerebral exterior. Things do pick up when Holmes arrives on the scene, but mostly because the story has progressed to the point where there is little to do but play out the final sequences, which involve action. Even then, though, McCabe shows us as little as possible of the dangerous chases through the moors and nothing at all of the titular hound.

None of this is to suggest that McCabe and CityLit don’t do a fine job of evoking Holmes’ world. From Ray Toler’s set to Ben Chang’s evocative musical accompaniment (his violin does at least give the missing hound a voice) to Lily Grace Walls’ costuming and Daniel Salazar’s lighting, we are absolutely immersed into the period. But plays that over-rely on narrative monologues can easily come across as stiff and a bit dull: too much “telling” and not enough “showing.” You can get away with that sometimes in literature, and Doyle does, but, no matter how fine the acting and tech might be, it doesn’t translate to the more visual medium of the stage.

And the acting is indeed uniformly strong. Aside from the detectives, there is a stellar performance by Dylan Jost as Henry Baskerville, the heir to the massive estate at the center of this mystery. Baskerville has grown up in America, far apart from the sedate British countryside, and has an American’s tendency to want to get right down to the center of things. At times, Jost seems to be justthisclose to losing his cool, and that is a characteristic we miss elsewhere. Dylan S. Roberts also gives a fine, lightly comical performance as Dr. Mortimer, whose fascination with the shapes of skulls is fodder for many jokes. Interestingly, one of Roberts’ early moments, played and intended as humorous exaggeration, manages to serve as a contrast to what we see throughout the rest of the play. Mortimer is reading the legend of the hound to Holmes and Watson, and the untrained character reads it in a dull, too-fast monotone. However, we see how it seems to him in his mind: a bold, emotional, excessive, hyperdramatic reading that seeks to do the eerie story justice. No one would want to see a whole play full of this kind of “Master Thespian” acting, though Roberts is wonderful as he delivers it. But it contrasts not only with the “real world” reading of the tale but also with all of the other monologues of the play, reminding us that trying to portray these kinds of stories through devices such as Watson’s diary or his letters to Holmes simply doesn’t play as well as letting us see them play out in front of us.

CityLit’s 40-year commitment to staging literary plays and adaptations of works of literature has been a gift to Chicago’s theatre community; no one else does anything like it. But in this case McCabe’s company is, if anything, a bit too literary and formal in its adaptation. Real fans of Doyle’s work may enjoy this well-acted version even if it seems more stagnant than the source material, but I’ll stick with the BBC television series: it’s just as cerebral but also far more visual, and theatre is first and foremost a visual medium.

The Hound of the Baskervilles is a City Lit Theatre production now playing at the Edgewater Presbyterian Church, 1020 W. Bryn Mawr, Chicago through Nov 10. Check the website for specific dates, times, and tickets. Find more information about current plays in our front page recs and at theatreinchicago.com.