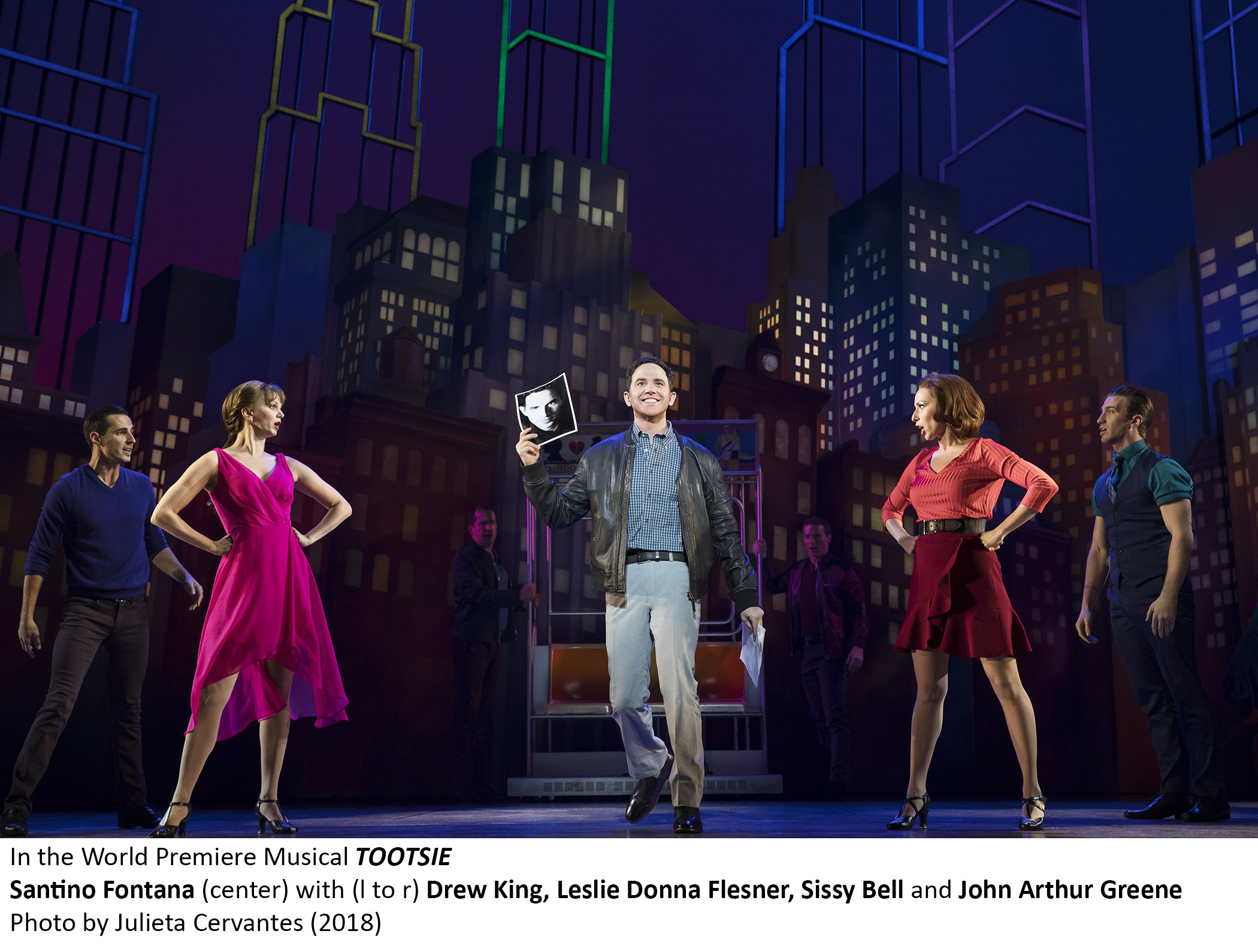 There is a lot of excellent news about Tootsie, the new musical by David Yazbek (The Band’s Visit) and Robert Horn (13). The good news that this is the best Broadway try-out show we’ve had in Chicago in a very long time. The better news is that Horn’s book is vibrant with wonderful dialogue and jokes, almost all of which land. The great news is that Santino Fontana, who plays Michael Dorsey/Dorothy Michaels, has a mind-boggling voice in both roles, taking advantage of Yazbek’s mostly brilliant new songs. But for me, the really great news is that this new Tootsie ameliorates several significant problems that existed in the 1982 film.

Most of the humor in the original film derived from its basic premise: Michael Dorsey a desperate and out-of-work actor, auditions for a role as a woman and is hired. He then proceeds to turn the soap opera he is working for on its axis, asserting himself in ways none of the “other” actresses would dare, while teaching them to stand up for themselves. Because his Dorothy is so dynamic a character, two different men fall for her, allowing for several comic moments based on the this-was-funny-in-1982 possibility of two men kissing. More significantly, though, Dorsey falls for his co-star Julia, which (given that she thinks he is female) causes all sorts of conundrums.

Horn’s book almost utterly eradicates the latent homophobia from the story. (He leaves in a probably automatic line from one male lead after he discovers the truth about Dorothy, but that’s it.) His humor derives much more from the characters themselves, most of whom are fully fleshed out by the book and Yazbek’s lyrics. There are, for example, numerous lengthy scenes with Michael’s roommate, played by Andy Groteleuschen (Bill Murray in the film), which are not only very funny but which help us to appreciate their friendship far more than in the original.

Horn and Yazbek also have a ton of fun with the insecurities of Sandy (Teri Garr in the film), played by Sarah Stiles. Stiles is such an expressive comic actress and singer that we can’t help sympathizing with her, and her song is one of the best character songs in the musical. Another character who is inherently humorous is Max Van Horn. In the film, he is a lecherous older actor on the soap opera. Here, with Horn’s book resetting the location to Broadway, Max is a young studly performer with little understanding of acting at all and not a whole lot upstairs. The dumb jock trope is perhaps overplayed, but Horn wisely allows him some redemption.

Moving the setting to Broadway, where Dorothy wins a role in a musical, allows for some wonderful showcases for set designer David Rockwell, whose towering neon cityscape changes into the much more sedate dwellings of the actors; costume designer William Ivey Long, who gets to play with multiple quick-change costumes; and especially choreographer Denis Jones, whose wonderful work includes winky send-ups of some of Broadway’s famous styles. Director Scott Ellis feeds off of all of these designers (plus Donald Holder’s lighting and Brian Ronan’s sound) to create a show that absolutely sparkles. (And, yes, “Tootsie” does appear in the famous sparkling red dress.)

But it is the performances he gets from his actors that make the show work so well. Lilli Cooper is excellent as Julia (Jessica Lange in the movie), though she is not given much character help from her solo song, one of the few misses in this score: it’s long and serious and slow, and she needs something more upbeat and funny to endear her to the audience so that we care more that she could end up with Michael. Similarly, Reg Rogers as comic foil Ron Carlisle needs more to do; the film relied on Dabney Coleman’s dry and sexist comments for humor, but in the #metoo world, the character needs to be drawn differently to work and here Rogers just isn’t given enough to do. Julie Halston, perfectly cast as the feminist producer, could also use some more punch.

In any case, it is Fontana who bears the weight of the show squarely on his shoulders, and whether clothed in a dress or men’s clothing he pulls it off. Fontana (who might be familiar from his role in the television show “Crazy Ex-Girlfriend”) is an instantly likable actor, which is critically necessary for Michael, a character who is selfish and out of control and who makes a really, really wrong decision out of desperation, not realizing or caring whom he might hurt in the process. Without Fontana’s genuine charm, Michael could come off very poorly. In the film, Dustin Hoffman uses his voice, for the most part, to temper the character’s caustic nature, and here Fontana is allowed to do so not only with his stellar vocal chops (how on Earth he manages to sing so beautifully as Dorothy is beyond me) but he also gets more of an opportunity to build the character, as he does throughout the show. The film’s Michael was all about reacting to the situation in which he placed himself; this one is more introspective and whole.

It is that level of introspection that really separates this musical from the movie, While it was enough, in 1983, for the character to be verbally contrite (“I was a better man with you, as a woman, than I ever have been as a man”), here Horn and Yazbek know that in today’s world that would never be enough. Several times throughout the show, Michael takes time to wonder what the heck he is doing, and in the end his contrition is more drawn out and thus more effective. (What is less effective is the song that Yazbek gives him near the end to show that contrition: like Julia’s earlier, it is slow and actually rather dull, a surprising miss in a show full of hits.)

Tootsie is not quite Broadway-ready yet. There are those twin character-revealing numbers that need work, as well as the underwhelming character of Ron Carlisle and the fact that the first act is a bit too long. Also, there is a bit of confusion about Dorothy’s fame: in the film, she was the ongoing star of a soap opera; people had ample opportunity to get to know her. Here she is supposed to have gained that level of instant recognition (and even rumors about a Tony nomination) before the play even opens. This seems unlikely at best, and ought to be dealt with by Horn. But these are, over all, minor concerns. Fontana’s performance, the hilarious book, and the songs that do work will easily make this show a hit. Maybe Dorothy can get that Tony after all.

One of the most endearing characters from L. Frank Baum’s Oz stories is the little patchwork girl. New American Folk Theatre’s production of Anthony Whitaker’s original story “Scraps” tells her tale in a bright, inventive way. Directed by Jamal Howard, the play combines The Patchwork Girl of Oz with several other books (notably those dealing with Ozma and the Land of Ev) and makes grand use of an ensemble of eight actors playing multiple roles.

Scraps (Brittney Brown), like Baum’s Tin Man (who makes an appearance), lacks a heart. In the book, she is a companion to the main character, Ojo the Unlucky (Preston Choi) in a search for a magical cure. Here, tired of her dull and repetitive life (shown in a brilliant opening), Scraps decides to (literally) go where the wind may take her to find out what she is “meant” to be.

Choi and the rest of the talented ensemble (including JD Caudill, Kelly Combs, Jeffrey Hoge, Charlie Irving, Vic Kuligosky, and Kelsey Shipley) are ultimately there to support Scraps on her journey, one which children may enjoy as much as adults. Many of the side characters here are also or have been in search of the real meanings in their own lives. Ojo is desperately in love with Prince Evring (Kuligoski), who wants to requite his love but feels trapped by royal obligations. Dorothy (Irving again), now a Princess of Oz, doesn’t quite understand what her life is supposed to amount to, but spends a great deal of it in an affair with Princess Ozma (Caudill), a transgender ruler (“part boy and part girl”) and who doesn’t quite know whether she is in the right place as a princess either. (Though the same sex relationships are not in the Oz books, Ozma’s back story is.) Even an enchanted book spends the play comically searching for the truth of its existence.

In the title role, Brown is entirely endearing. Despite spending the majority of the play with her face hidden behind a mask, her ebullience and energy shine through, making Scraps (whom some of the others consider a bit of a joke) a fully developed person in her own right, despite what she might believe. In someone else’s hands, the role might have become caricature, but Brown is careful to take Baum’s unusual creation as seriously Scraps takes herself.

With beautiful costumes by Zachary Ryan Allen and fun puppetry by Whitaker, along with Howard’s quick pacing and this cast’s clear joy of performance, Scraps is an enjoyable couple of hours. (The play’s first act could be somewhat truncated and the intermission eliminated to get it down to an hour and a half, which is probably what the material demands.) It’s unfortunate that, the night I saw it, very few people were in the audience. Inventive and fun, Scraps deserves better than the, um scraps left over from other shows. Its warm-hearted message, campy style, and strong acting make it a good choice for the entire family.