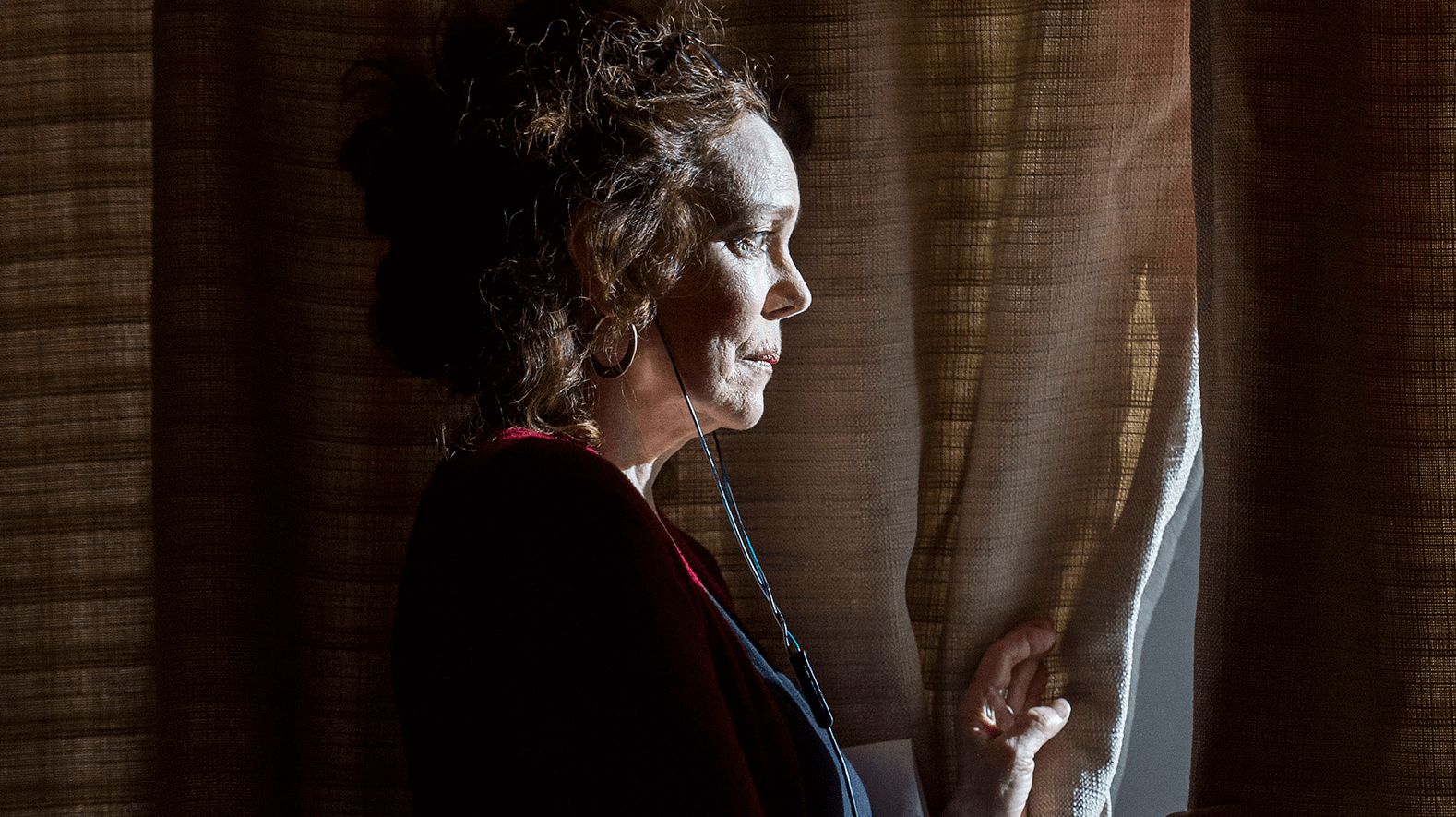 I have been bingeing “Criminal Minds” lately, a show about a team of FBI behavioral analysts who track serial killers, kidnappers, and other criminals through profiling. Sometimes, the show being what it is, we watch a crime from the victim’s perspective. Many times that involves abduction, and it is always harrowing to imagine what the victim is going through. But that is fiction. In Lucas Hnath’s Dana H, which Goodman Theatre Artistic Director Robert Falls accurately describes as “both urgent and vexing,” we meet the reality. This play, for which the adjective “unusual” would be damning with faint praise, gives us the true story—in her own words—of the five-month-long abduction of Hnath’s mother, Dana Higginbotham, in 1997.

Not content merely to present this nightmare, Hnath made the decision to use actual recordings of his mother talking about her ordeal. Actress Dierdre O’Connell, alone on the stage, lip-syncs the role to these recordings. The result is simultaneously engaging and distancing: we know that the actress’s voice is not what we are hearing, yet somehow that makes us listen that much harder, involving us even more in the frightening (and occasionally baffling) tale.

Director Les Waters, along with lip-sync expert Steve Cuiffo, worked hard with O’Connell to help her to create this unique performance, in which her movements, expressions, and even her pauses evoke the sound and tones coming from the speakers. At first, the lip-syncing seems like a gimmick, but gradually we forget the gimmick and simply accept O’Donnell as we would any other actress playing a role. The difference is that, through the use of Dana H’s imperfect dialogue, we are seeing something far more naturalistic than we are used to, and it feels much more intense because it seems so real.

For Higginbotham, a non-denominational hospice chaplain, the events of 1997 began with her befriending a suicidal ex-convict named Jim and helping him to establish a life for himself. Eventually, Jim becomes infatuated with her and ends up coming to her house and kidnapping her, taking her on a months-long journey around Florida and up to North Carolina, staying in one crappy hotel room after another while convincing himself that he is “protecting” her. (Andrew Boyce’s set is a perfectly realistic reproduction of one such room.)

Since we are hearing all of this from Higginbotham herself, we can hear her fear and confusion about what happened to her, which she has recorded years after the fact in a manuscript. At some points, she relies on that manuscript to help her to remember, even though recognizing that she is uncertain of its accuracy. She seems to grow more accepting of her situation as time passes, perhaps as a result of Stockholm Syndrome, perhaps the consequence of several occasions when she managed to get to a policeman but found no help: none of the cops were willing to endanger themselves and their families by standing up to a member of the Aryan Brotherhood who was protected by his comrades.

O’Connell’s performance is nothing less than astounding. Her lip-syncing is perfect, but that is only the start. We can read the conflicting emotions of the actual Dana H in her face, in her fidgeting, in her eyes. Because this recording was culled together from many hours of interviews, it is often slightly discontinuous in tone and mood, and O’Connell’s quick shifts from one moment to the next perfectly map the stream of consciousness recounting of the story. On several occasions—pulling myself away from the moment to examine her performance—I found myself thoroughly impressed by the way she captured the varying cadences and stammering of the recording. It is indeed remarkable; she becomes her character.

When it was over, I found myself left wondering about several matters, among which was what Hnath’s role in the original story was. At the start, Dana has just lost her job as a result of her divorce, leaving her without obvious people to miss her on any kind of daily basis. But she does have her son, who has just started college and then suddenly doesn’t hear from his mother for ages. How does he react to that? Why doesn’t she address it in her interviews?

In addition, there is a sequence that rips a hole in the naturalism of the presentation: using Paul Toben’s lighting and Mikhail Fiksel’s sound, we are suddenly immersed in an overwhelmingly expressionistic scene that is all emotion and confusion. It’s a brilliant effect, but it feels theatrical for the sake of being theatrical. In a play which is, despite its overt gimmickry, highly realistic (there is even a maid who enters at one point to clean the room), it seems somewhat out of place, a stark reminder that we are not watching an actual woman recounting the horror of her experiences but, after all, a play.

Dana H is a play that is definitely not for everyone, which is why I yellow-light it in my recommendation. But it is a play that is as compelling as O’Connell’s performance, which is one of the finest of the year. You may well, as I did, leave the theatre with as many questions as answers, but you will have experienced something indelible and remarkable. It definitely beats watching a procedural on TV.

Dana H is now playing at the Goodman Theatre, 170 N. Dearborn, Chicago through Oct 6. Check the website for specific dates, times, and tickets. Find more information about current plays in our front page recs and at theatreinchicago.com.