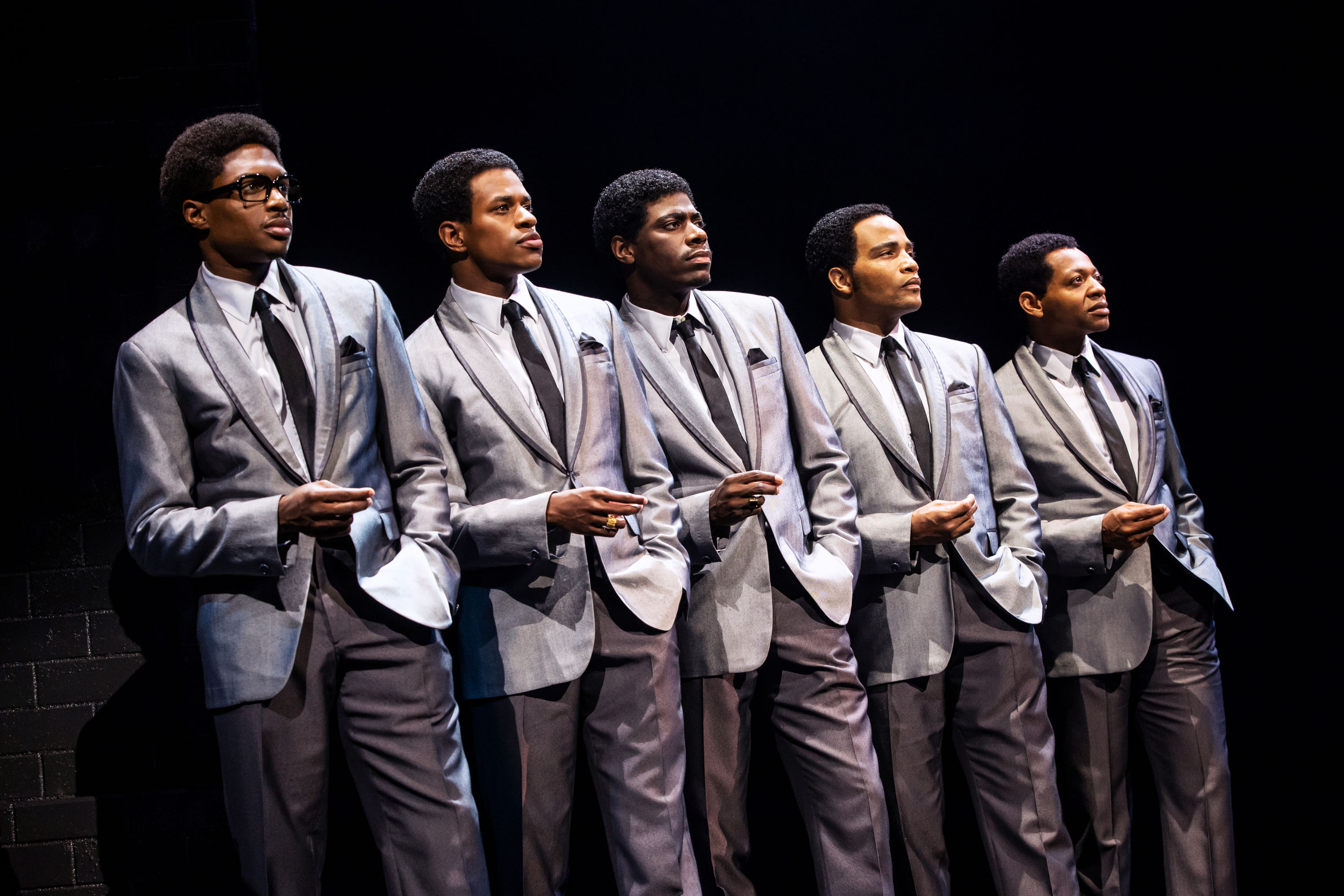 There are few examples of jukebox musicals – a denigrating term if ever – that have blown me away. In fact, without over taxing my brain, Jersey Boys, which dramatizes the formation, success and eventual break-up of the 1960s rock ‘n’ roll group The Four Seasons is the only jukebox musical of import that immediately comes to mind.

Directed by Des McAnuff, and choreographed by Sergio Trujillo, Jersey Boys opened on Broadway at the
August Wilson Theatre to rave reviews in November 2005. Winning four Tony Awards, one for Best
Musical, after 4642 performances it closed in January 2017. Not surprisingly (most likely not to its producers) it reopened eight months later Off Broadway at the New World Stages where it is currently playing to full houses.

Ain’t Too Proud: The Life and Times of the Temptations, another jukebox musical, also helmed by the
Des McAnuff and Sergio Trujillo duo, opened this past March at the Imperial Theater on Broadway. No
doubt Des and Sergio and the musical’s 43 producers (all listed in the program) are hoping to duplicate
the success of Jersey Boys.

I wish that I could say that Ain’t Too Proud turned me inside out and sent me directly to heaven. But if
the truth be told the first act is a painful 30 minutes too long, and Dominique Morisseau’s mechanically
written fact-filled book based on the group’s original founder Otis William’s 1988 memoir – lots of I did
that and he did that and then we all did that – is as engaging as bad coffee and a failed omelet on a gray
day.

Worse! The musical’s thirty-one songs, less than a half a handful sung in their entirety, was a two and a
half hour musical coitus interruptus. In fact, for me, the only satisfying climax came at curtain call when
all the super-talented performers, along with the musical’s superb musicians, took their well-earned
bows. Yes! A vociferous standing ovation – a Broadway musical tradition for a number of decades –
thundered throughout the house.

On the sugary upside – an obvious embarrassment of riches – every person on stage, some playing
double roles, some just standing and looking good, could act, dance, and sing to a fare thee well. Adding
extra-high voltage were the voices of the lead “Temptations.” A few could shatter glass and affect sudden
and unexpected James Brown splits, all of which had the audience yelling and screaming, just as if they
had never seen or heard such singular goings on before.

Unlike the Jersey Boys, whose format had each of the band members giving their own perspective on the
group’s history and music, or The Cher Show, and Summer: The Donna Summer Musical, which featured
three Cher’s and three Donna’s, each representing different time period in the star’s life, the
Temptations features the group’s original founder Otis Williams (neatly channeled by Derek Baskin) to
shepherd us through the history of group’s six decades.

With many twists and turns, the journey begins on the streets of Detroit, passes through the country’s
civil unrest during the late sixties (think Viet Nam protests and the Assassination of Martin Luther King), tours the segregated south, visits the Temptations’ 42 top ten hits and 14 number one songs, shows a
crack party sequence in which ostensibly Otis was the only member to not partake, and reaches the Hall
of Fame and beyond. The story mainly revolves around the group’s earliest five members and a few of
their replacements, this due to booze, drugs, suicide, illness, and ego problems.

Adding a dollop of historical fluff in minor roles and cameos are Motown’s Barry Gordy (Jahi Kearse), and
Smokey Robinson (Christian Thompson). As far as Motown’s female contingent, getting to show their
singing chops just a wee bit are the Supremes inhabited by (Candice Marie Wood (a superb Diana Ross),
Nasia Thomas (Florence Ballard), Taylor Symone Jackson (Mary Wells), and Tammi Terrell (Nasia
Thomas, who died of brain cancer at twenty-four). One of the musical’s sadder notes, she gets to share
half a song with one the Temptations.

The highlights of course are the songs sung by the Temptations and a few of their early replacements.
Ephraim Sykes as David Ruffin, the group’s second and most famous lead singer, sings “My Girl,” and “I
Could Never Love Another (After Losing You).” His scissor splits bring down the house. Drug use and
irrational behavior helped to do him in. Jawan M. Jackson as Melvin Franklin, with a shaking the rafters’ bass, brings needed wit and much laughter as his sonorous voice; emerging at the proper times, his voice sinks lower than is humanly possible. Unfortunately, health issues lay him low. Jeremy Pope’s, (Eddie Kendrick), is the always
questioning cynic of the group. His high notes during “Just My Imagination (Running Away With Me)” and
“Get Ready” just about pierce the theatre’s ceiling. James Harkness, as Paul Williams, another Classic Fiver, in losing a battle with alcohol commits suicide. His singing “For Once In My Life” with loads of heart-rending emotion is a standout. And of course, the last one standing is Derrick Baskin’s Otis Williams, who at 77 is still out there performing with the Temptations. A little known fact, and I am tossing it in for fun, the thrice wed Williams was once engaged to Patti LaBelle. She ended the engagement when he wanted her to quit music and become a housewife. You Go Patti!

As far as the production’s technical prowess, Paul Tazewell’s costume design (the spiffy signature
looking suits of the Temptations) was letter perfect. The set (Robert Brill) with its revolving turntable,
simple furniture when needed, and muted gray colors, and Howard Binkley’s lighting design, did no
harm to the production. As far as Sergio Trujillo’s choreography, well, his hands were tied from the get-
go. After the first half dozen beautiful and smoothly choreographed songs, and there were some two
dozen and a half, tedium began to set in. I mean how many uniquely different hands, legs, and body
movements can you stomach before you go bonkers?

The good news for Temptation lovers is that the seemingly never-ending group is still touring and
releasing albums both old and new. Their touring schedule and album list can be found on their website
http://www.temptationsofficial.com/tour/ Ain’t Too Proud: The Life and Times of the Temptations, opened on Broadway on March 21, 2019 at the Imperial Theatre at 249 West 45 th Street in New York. Directed by Des McAnuff, its running time is 2 hours and 30 minutes. For more information, or to buy tickets check out the musical’s website Ain’tTooProudMusical.com, Telecharge.com or 212-239-6200