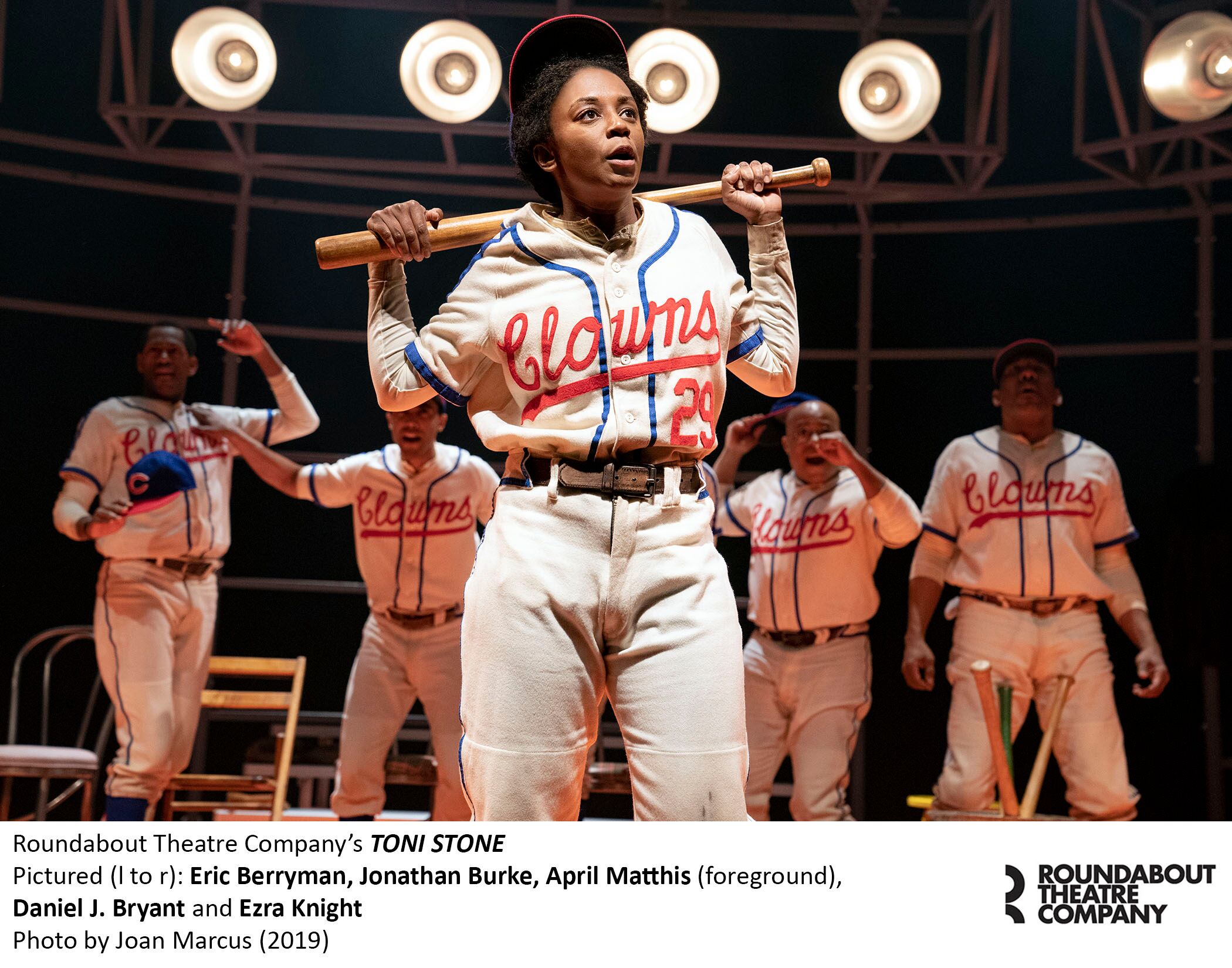 April Matthis, as Toni Stone (1921-1996) the first woman to play professional baseball in the Negro League, is knocking it out of the ballpark every night at the Laura Pels Theatre through August 11.

The play, lightly based on Martha Ackmann’s book “Curveball: The Remarkable Story of Toni Stone,” is overwhelmingly inspirational, deeply humane, and totally moving.

With Toni Stone, the bases are loaded with the crème de la crème of the theatrical world – from Lydia R. Diamond’s poetically crafted play to Tony Award-winning director Pam MacKinnon’s direction and the inventive choreography by Camille A. Brown – all of whose finely calibrated work radiates a deeply ingrained brilliance.

Temporarily casting aside the play’s exceedingly fine male ensemble (there are eight teammates, some of whom play dual roles, both gender and racial), it is 2015 Obie Award winner Matthis who turns in a truly star-making performance around which everything whirls for two hours and ten minutes. She brings Toni Stone and her little-known story alive and kicking into the world. As the play’s sole electrifying story-telling narrator, Matthis’ performance is simply mesmerizing.

So convincing is Matthis that we soon begin to feel that it is not the actress standing before us but Toni Stone herself who has come down from heaven, where no doubt she is still playing baseball, to hear Matthis tell her tale. And tell her tale she does, often in monologue style which Toni Stone calls ‘ramblin’.’

“I’m not a big talker,” she informs us as the play opens. “I talk a lot, but I don’t talk big. I have pride, but I wouldn’t say I’m proud. I don’t put more in a story then is really there. And I don’t like it when other people do. So don’t think I’m bragging when I tell you that I do the things I do well, better’n anybody. I am prone to ramblin’. Never could tell a story from beginning to end all nice and neat. My brain don’t work that way.”

True to her word, the play’s scenes, which cover the years from 1920 into the 1950s, jump back from one decade to another, quite surprisingly adding a sensuous feeling of wonder to Toni Stone’s life and times. We hear about her growing up a tomboy in St. Paul, her interest in sports – figure skating among them – and her deep love of everything about baseball. It was a love so intense that a baseball mitt and ball, both of which she poetically canonizes, rarely left her hand.

Equally beguiling is the playwright’s genius which gives us scenes with just enough detail to let us fill in any perceived informational gaps. It is this sureness of Diamond’s hand that steers this play away from the shores of your typical fact and figure-filled biographical boredom.

Stone sets the scene early on by introducing us to Sydney Pollack. “Meet Sydney Pollack. He’s white. He’s the owner of the Clowns. Nice man, good heart, pays better than the other owners, white or black. He takes as good a care of us as any white man would think he should. Still, you hear what I said? He the owner. He own us.”

Some are singled out for playing flashy and playing hard. Others are identified for keeping company with a bottle, being popular with the ladies, being the toughest lefthander she ever met, being the most handsome, and the best at clowning around. They are all at the top of their game we are told.

Along the way the audience is made privy, no doubt many for the first time, to the inner workings of the Negro League.

It was not always a pretty picture either on the field or off for Toni or her team. Racial segregation was at its height during the years she was playing, and blacks were treated, be they entertainers or athletes, as second-class citizens. They were denied entrance to white hotels and restaurants and heckled by whites in the grandstands where they played. On the field some Negro teams were not only required to play ball but to add minstrel-like entertainment to the mix, thus explaining the Indianapolis Clowns, the title of Toni’s team.

In some cases, as Toni tells it, team owners scheduled them opposite a white team. “We was to give a show, make ‘em look good, let ‘em win, and get a cut but sometimes you just don’t have the lose in you.” When this happened the team had to beat it out of town before the town was beaten out of them.

Many a night when there were no local black establishments to put them up, Toni and the team found themselves sleeping on their bus. Occasionally, when Toni (and presumably her teammates, though we do not see this) were too tired to drive a few hundred miles to the next day’s game, they elected to spend the night at a black brothel on the outskirts of town.

It is at a brothel where Toni forms a close friendship with Millie, one of the ladies of the night who is played sensitively by Kenn E. Head. It is from Millie, in several compelling scenes, filled with intimate talks with Toni about men, sex, relationships, and how to wear your hair and apply makeup, that Toni learns there is more to life than baseball. It is then that she decides to pay more attention to a three decade’s older businessman Audacious Alberga (a marvelous Harvey Blanks), who wages a long and successful battle to get Toni to marry him.

Alberga was especially amazed – as was the audience – by Toni’s “encyclopedic knowledge of anything that’s ever happened on a baseball field anywhere in the western world. Like Millie, Blanks also doubles as a teammate. Suave to say the least, it was a joy, as well as great fun to watch Alberga, step by step, sweet talk his way into Toni’s heart.

Adding to the production’s overall magic with well thought out touches that hold the entire play from flying out the window is the work of the production’s designers, all of whom wisely let the play speak for itself.

Toni Stone opened Off Broadway on June 20, 2019 at the Laura Pels Theatre at 111 West 46th Street in New York. Directed by Pam MacKinnon, its running time is 2 hours and 10 minutes. For more information, or to buy tickets check out roundabouttheatre.org or call 212-719-1300