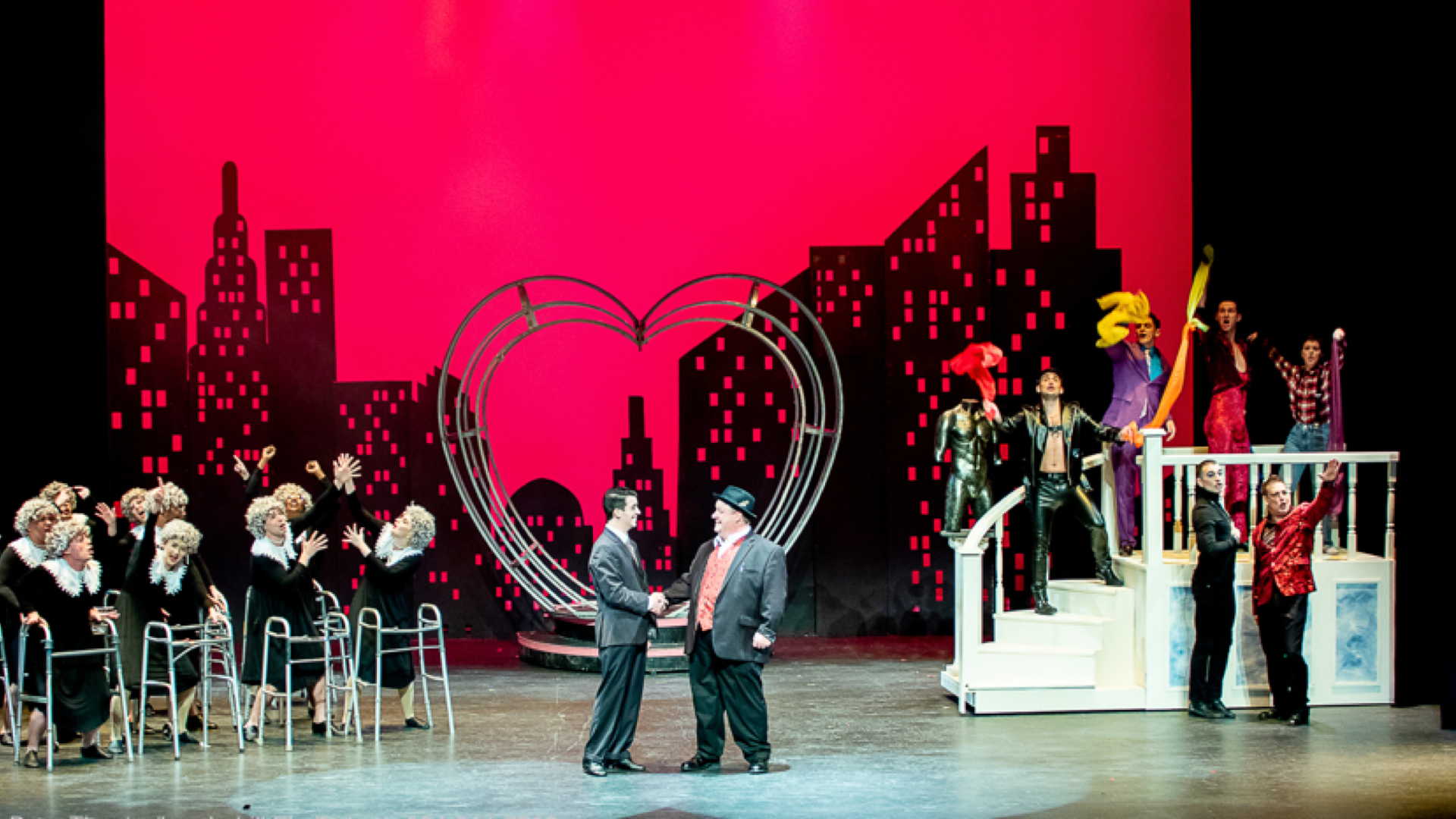 Anyone who has never seen Mel Brooks brilliant classic, The Producers, in film or on stage should be sure to see the latest production at Stage Door Theater. This is a landmark experience – theater telling a story about theater – a real groundbreaker in 1968 and ever since.

The plot is delicious. Two con men – as odd and contrasted as the equally famous Odd Couple — swindle a gaggle of old ladies into backing a Broadway show which they plan as a failure. The two men play off well against each other, great foils –colorful, pompous, worried Max Bialystock (Ken Clement) vs mousey, nervous, neurotic Leo Bloom (TJ Lamando).

They find the worst playwright, Ex-Nazi Franz Liebkind (Michael Biggs), minding his pigeons in a rooftop cote while mourning the good old days in Bavaria. After they get him to sign, they line up the worst director — flaming homosexual Roger DeBris, (Larry Buzzeo).

The chosen play centers on a spritely, cheerful Hitler as their outrageous – and gay — subject in a work celebrating “Springtime for Hitler and Germany.”  Of course – if the show succeeds – the money-making plan will fail, and they will be felons rather than millionaires. But how could that ever happen? So unlikely – or is it?

The cast is skilled; the choreography is splendid.  However, some of the dialogue is not easy to hear or follow – lines become blurred. Musical numbers transcend the dramatic scenes. Nothing can top the number where all the grey, curly-haired, spectacle-wearing old ladies – clad in black dresses with white lace collars — break into a crisp dance complete with their walkers. Foot stamping alternates with the crashing of the metal walkers on the stage floor.

Of course, the most awaited number is the actual “Springtime for Hitler” song, with its goose-stepping Nazi soldiers. The Producers is filled with crazy accents and pointed caricatures of Nazi’s, homosexuals, sex pistols, sex-starved ancient biddies and greedy con men.

Clement really comes into his own with a great solo as Max, heading for Sing Sing Prison, cries out against Leo with the ballad “Betrayed,” when he feels he has been left holding the bag.  Kudos also to Melissa Jones as gorgeous, lithe Ulla, the femme fatale, desired by both Max and Leo, and to David Nagy as Musical Director and Danny Durr as Choreographer.

The Producers won 12 Tony’s in 2001, including Best Musical — the most given in the awards’ history.