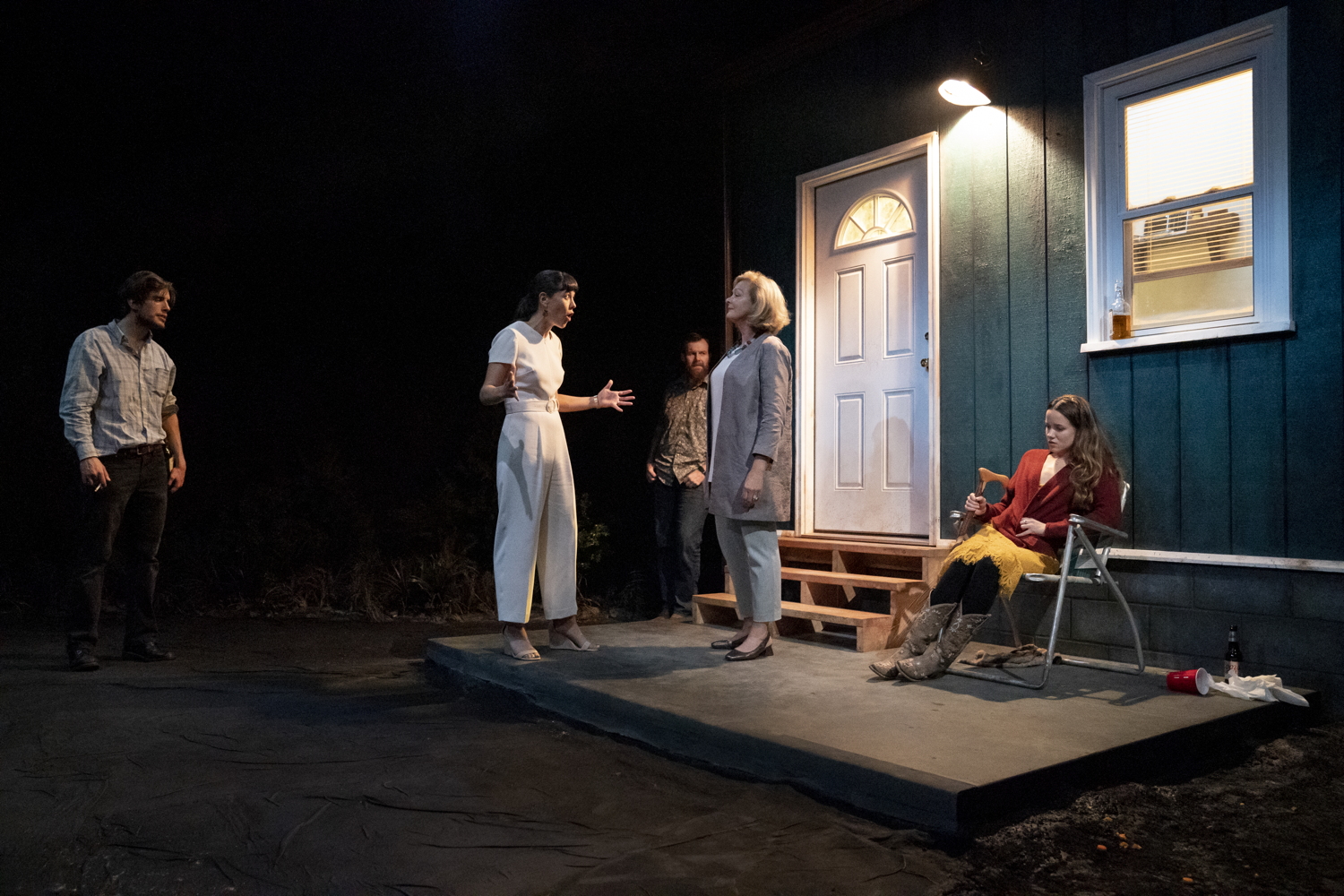 Will Arbery’s latest play, Heroes of the Fourth Turning, having been extended two times by popular demand, is now running Off-Broadway through Sunday, November 17 at Playwrights Horizons.

With more religious, personal, and political exposition (read talk) than many a mind can absorb at one sitting, Heroes of the Fourth Turning is essentially a snapshot of the current divisive state of affairs in this country.

It is a play that not only digs deep but demands one’s fullest attention. In short, this is not a play that one can sit back, relax, and let it gently waft over you.

Apologies, but for full satisfaction you are going to have to squeeze all of the juice out of this orange. You will be doing this throughout the play or after. More than likely, both.

Beautifully directed (Danya Taymor), and brought to life by a stellar cast of five, Heroes asks its audience to seriously consider beliefs other than their own. In this case, ultra-conservative Christian beliefs.

Comprised of five fully-rounded believable characters – a few with the help of booze, and perhaps in one or two cases cocaine – spend two intermissionless hours aggressively wallowing in their failings, hopes, desires, and spiritual doubts.

All five died-in-the-wool Catholic conservatives, now in their late twenties were college undergrads together, and one, a professor at the ultra-conservative Transfiguration College in Wyoming where anti-abortion and anti- LBGT beliefs hold sway.

What gives Heroes of the Fourth Turning much of its authenticity is that both of the playwright’s parents are conservative Catholics teachers. Adding even more heft is Arbery’s father is currently the president of Wyoming Catholic College, the same state in which the play takes place.

For the record, Arbery, not following in the footsteps of his parents, as his essay in Playbill informs us, voted for Obama, tellingly, a secret he chose to keep well-hidden.

As the program reads, it is August 19, 2017. It has been seven years since college graduation and we are in small western Wyoming town of 7,000. It is nearing midnight, and a party at Justin’s (Jeb Kreager) house has just ended.

All four friends are hanging about in Justin’s darkly noir-lit (Isabella Byrd), and well-forested backyard (Laura Jellinek). Here in the dark, with one porch light which barely illuminates the action, they spill their guts, and expose their innards, as they wait for Gina (Michele Pawk) their old college mentor to show up. Congratulations are in order, as Gina has just been appointed president of their old college and nobody is about to leave until she shows up.

Adding a gun to the proceedings, a sly political, and mysterious mood-establishing hint, the play opens with Justin, rifle in hand, shooting into the brush. At first, we are not sure who or what has been shot. Walking into the thicket, Justin returns dragging a deer onto the patio where he immediately starts to eviscerate the animal. Anxiety follows as he vigorously attempts to remove the bloodstains from the patio floor.

An ex-marine before college, Justin, a little older than the others, never left town after graduation. Currently he works at Transfiguration and carries a gun in his back pocket. Justin, a voracious reader, worries about the state of the union, and L.B.G.T issues which he sees as a threat to Christian families. A devout Roman Catholic, he has dreams of moving to Busseto, Italy and becoming a monk.

Justin also has a soft spot for Emily (Julia McDermott), a gentle, cane-walking soul who suffers from an unnamed debilitating disease which leaves her in a constant and crippling-pain. A self-appointed caregiver, when she needs to go to the bathroom, he carries her into the house. Though having once worked for a pro-life organization, Emily, the daughter of Gina, is the most liberal of the bunch. Unlike the others, she counts among her close friends a drag queen and an abortion-rights activist.

The firebrand of the group, dressed in a white pantsuit (Sarafina Bush) and playing the part of an avenging angel, is Teresa (Zoë Winters). Now living with an actress roommate in Park Slope, Brooklyn, she writes for a radical conservative website.

Teresa also delivers, at rat-a-tat-tat speed, the majority of the play’s monologues, which include attacks on the weak, her three friends included. Eschewing what she calls the empathy of liberals, Teresa is convinced that a war, be it cultural or literal, is on its way. She views this coming which will determine whether their faith and views will survive as both a rapture and ravishment.

As to be expected, Trump gets his share of mentions. Kevin, with no explanation coming from his side, tells us that he vomited after voting for Trump. Teresa, citing Mr. Trump, calls him “a golem molded from the clay of mass media who has come to save us all.” Gina, taking a more considered view, thinks of Trump as “chemotherapy.” Vile but necessary.

The play comes most fully alive, and excitingly explosive, with a series of shocking and unexpected character revelations and conflicts which the playwright likens, as he writes in the Playbill, to the various interweaving voices found in a fugue, when the marvelous Michele Pawk, the only truly breath of fresh air in the play, arrives on the scene.

What follows are arguments aplenty and even a fight or two as each character, fighting to be understood, spends their stage time passionately defending their own particular beliefs.

Heroes Of The Fourth Turning opened on September 13 at Playwrights Horizons in New York City at 416 West 42th Street. It closes on Sunday, November 17, 2019. Running time is 2 hours with no intermission. For more information, or to buy tickets check out www.playwrightshorizons.org or call 212- 279-4200.