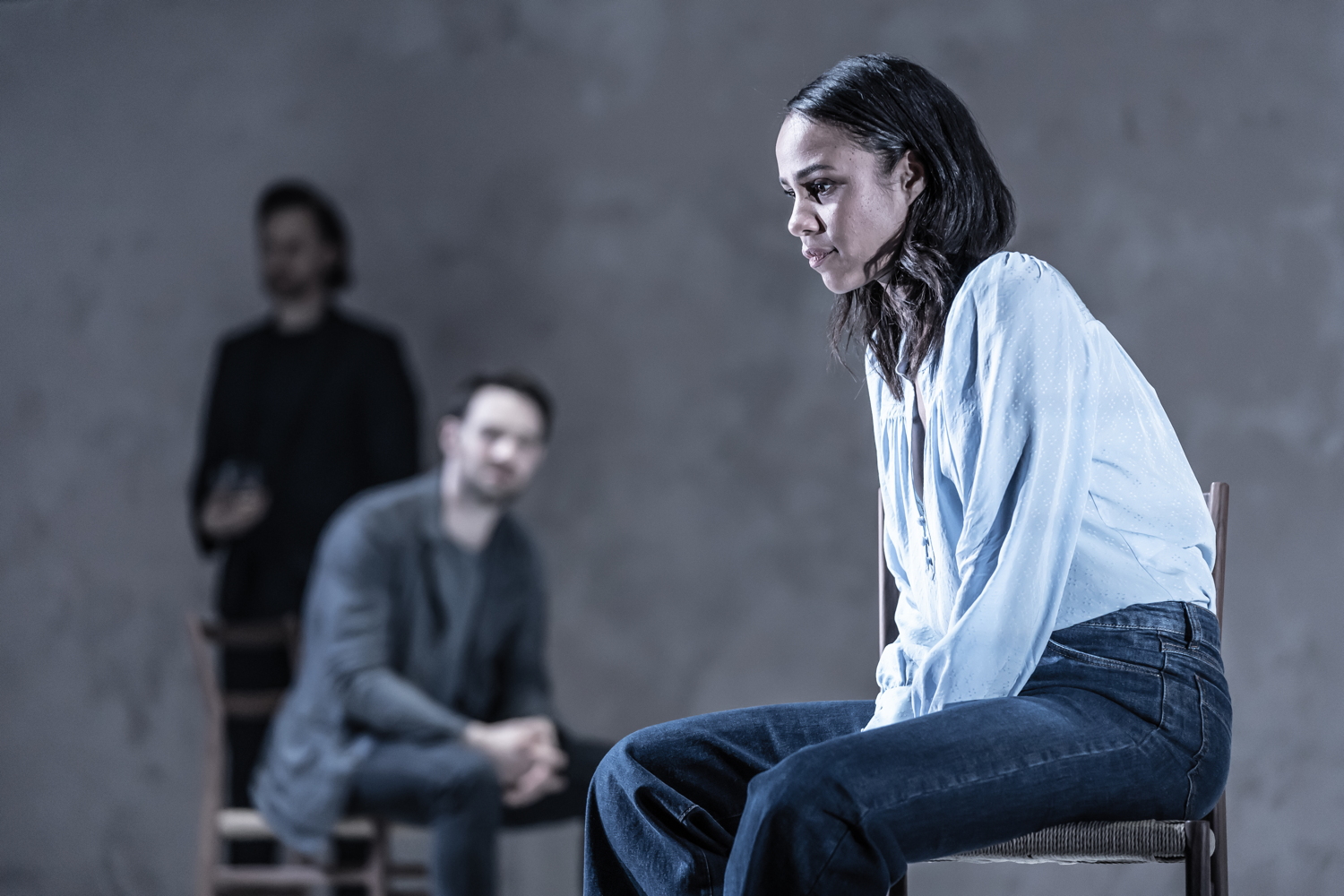 When I first heard that Harold Pinter’s Betrayal was coming to Broadway I was thrilled. I was long craving for something above and beyond the usual Broadway fare: something challenging that would set my brain to thinking, and my heart to feeling.

On the other hand, having seen Betrayal a number of years ago and remembering virtually nothing about it, I was of the mind that this play, based on Pinter’s own seven-year extramarital affair during the 1960s, and written in reverse chronological order, was a one-trick pony.

I have no idea why this thought came about. Maybe it was because recently there has been spate of plays and films that have used this same ‘shuffling of times’ trick ad nauseam.

However, after sitting through this production of Betrayal, I was fully convinced that had Pinter chosen to tell this story from its beginning to its end instead of from its end to its beginning, he would have delivered a predictable, been there, done that play, rather than an electrifying mind-boggling journey to remember.

Betrayal, arguably Pinter’s most-produced play, had its American premiere on Broadway in 1980. Directed by Peter Hall, it starred Raul Julia as Jerry, Blythe Danner as Emma, and Roy Scheider as Robert.

The last revival, directed by Mike Nichols, starred Daniel Craig as Robert, his real-life wife Rachel Weisz as Emma, and Rafe Spall as Jerry. It opened at the Ethel Barrymore Theatre in 2013. Gussied up with a lot of overt sexuality (kisses where none were called for in the original script), it was not particularly well-received.

Now for the fourth time, straight from a successful run in London this past spring, we have it again on Broadway. Running through December 8 at the Bernard B. Jacobs Theatre, it is swathed, deservedly so, in over-the-top glorious reviews for both its director Jamie Lloyd, its English cast Tom Hiddleston, Zawe Ashton, Charlie Cox, and the play’s pitch-perfect technical team.

Rarely have I seen scenic and costume (Soutra Gilmour) and lighting design (Jon Clark) lift a production this close to heaven. I am expecting a bunch of Tony nominations, and maybe even a win or two for the director, actors, and tech. So, stay tuned.

Except for an occasional chair or table and a glass or two, the play’s action – all the better for the audience to see, hear and mentally stabilize their bearings – takes place on a bare stage against an unfettered, variously lit, slate gray background that acts as a blackboard on which all is writ.  Here we are transported to restaurants, bars, Jerry and Emma’s home, a hotel in Venice, and a rented apartment where Emma and Jerry conduct their clandestine love affair.

The play opens in 1977 at a restaurant two years after Emma’s and Jerry’s seven-year affair has ended. It seems that Emma, still sentimental about their good times past, and perhaps still attracted to him, has called Jerry out of the blue to inform him that she is divorcing Robert, her husband of 14 years, and that she recently told her husband all about their affair.

Of course, this being Pinter, not everything said by the play’s characters is true, as mixed feelings, hidden emotions, betrayals, lies, and untold secrets, at least until they are revealed – play a large part in this, as well as other Pinter plays.

Eventually, through eight moving and often surprising scenes, we are brought back to Emma’s very first, not-so-innocent attraction to Jerry, and Jerry’s sudden declaration of love, in the year 1968.

Along the way there are a couple of riveting scenes between best friends Robert and Jerry. One of the more poignant ones is when Jerry confesses that he had been sleeping with Robert’s wife. Robert, cool, collected, and totally unfazed, tells a shocked Jerry, who has been feeling guilty for years, that he knew all along about their affair.

It seems that there is love between both men ever since their college days. No doubt, not unlike in the film Jules and Jim (1962), the fact that both men were in love with the same woman, and equally important sleeping with her, brought them even closer. Adding another layer of closeness is that both men, once poetry editors at their respective colleges, work in the same industry. Robert is a publisher (he claims to hate modern novels and loves Yeats), and Jerry is a literary agent.

Matching Pinter’s laying down of words is the slow pacing and tableau-like posing of the actors which in ways resembles a snapshot or, better yet, with Jon Clark’s front lighting that casts a shadow on the back wall for each actor, a trendy fashion shoot. These shadows on the wall also hint of each of the characters’ other selves.

Most ingenious is the director’s hand which has all three actors, whether they are in the scene or not, on stage at all times. Most ominously is Hiddleston’s Robert who is seen lurking in the shadows in just about every Emma and Jerry two-handed scene.

As strange as it sounds, I couldn’t help seeing in Hiddleston’s behavior, Trump’s strangely threatening circling of Hillary Clinton during the 2016 Presidential debate.

Another highly effective directorial and set designer touch, again showing the interrelatedness of the character’s over the years, is the production’s use of a revolving turntable built into the stage which, when in use, has the characters coming close and being pulled apart as they circle each other.

In the end what we have been experiencing, backwards of course, is the breakdown of love and its inevitable fading. It is three friends and lovers lost in a web of their own spinning.