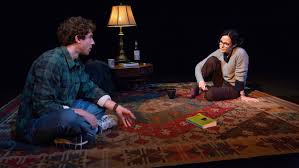 As a psychological thriller centering on the appreciation of writing and literature, Adam Rapp’s The Sound Inside is meant to appeal to certain kinds of people.  I proudly count myself among them; I found the pure intellectual pleasure derived from watching this two-hander about a Yale creative writing professor and her young protegé highly stimulating, no matter how dark the show gets. And I do mean “dark”: not only is Rapp’s plot disturbing, but Heather Gilbert’s lighting design literally leaves us in the dark many times, imitating the traumas of the characters’ minds.

David Cramer directs Mary-Louise Parker and Will Hochman in a play that begins as a long, spotlighted monologue and ultimately tells the story of two kindred spirits who come together far too briefly and too late to really be much help to each other.

Parker’s Bella Braid is the author of two brief volumes of short stories and a novel that never fulfilled its expectations. Through her, Rapp approaches this play as a fairly meta version of an extended writing lesson. Her character begins by telling us as much about herself as she can, openly acknowledging that doing so violates the precepts she gives her students, who are told to be stingy about such details. (After all, she notes, how much did Salinger tell us about Holden Caulfield? Answer: very little. We learn about him by listening to him as he tells his story.)

Parker herself has never seemed more vulnerable. In most of the things in which I have seen her, Parker’s semi-detached line deliveries and facial expressions have left her feeling a bit distant—not in a bad way, but as if things were happening to her that were outside of her control. (One notable exception to this was her role in The West Wing, in which her character had considerable agency.) In The Sound Inside, even when Bella is diagnosed with a virulent form of cancer, Parker performs a neat trick: she uses well-developed her stage persona to mask her character’s pain even while allowing us to see that it is eating her up inside. Despite the fact that she is playing an authority figure—a professor—she lets us in from the start so that we can see how empty her life is, how desperately she wants something…other. And this is critical: it creates credibility as her relationship with an intense student named Christopher begins to change. At first, he is basically a pushy young man who appears in her office without an appointment apparently just to chat with a teacher he sees as sharing his deep commitment to literature, but gradually she starts to see him almost as a peer: a talented and troubled writer with whom she can easily share a glass of wine and a conversation.

Hochman more than holds his own here. Christopher is an angry young man from Vermont who knows that he absolutely does not fit in with his Yale classmates, so he seeks out Professor Braid. He is in the process of writing a novel and desires her honest feedback. It is about a sociopathic young man named Christopher from Vermont who kills a friend without remorse; Hochman’s nonstop intensity even in quiet scenes forces the audience to wonder whether there is more of Christopher in his character than just basic biography.

Cramer’s understated direction, along with Alexander Woodward’s minimalistic set design and Gilbert’s eerie lighting, helps to focus Rapp’s script—which is rife with poetic flourishes and literary homage—on these two quite possibly broken people as they come together, each seeking some kind of validation and solace. Like the backgrounds that slowly fade into view, Parker and Hochman only reveal as much of their characters as they need to, and even though Parker appears from the start to be sharing everything about herself Braid is still able to catch us off guard.

The Sound Inside is probably not for everyone. As I watched it, I kept thinking that my husband, for example, who tends to like things less esoteric, might not appreciate it. However, I was riveted from start to finish by dynamite performances and a script that relishes in blurring the borders between fact and fiction while it presents us with two very real people struggling with their own notions of mortality in less than fulfilling lives. It’s a powerful piece and this is a brilliant production that will haunt you long after you leave the theatre.

The Sound Inside is now playing at Studio 54, New York City, through Jan 12. Showtime is 90 minutes with no intermission. Check the website for specific dates, times, and tickets. Find more information about current plays in our front page recs and at theatreinchicago.com.