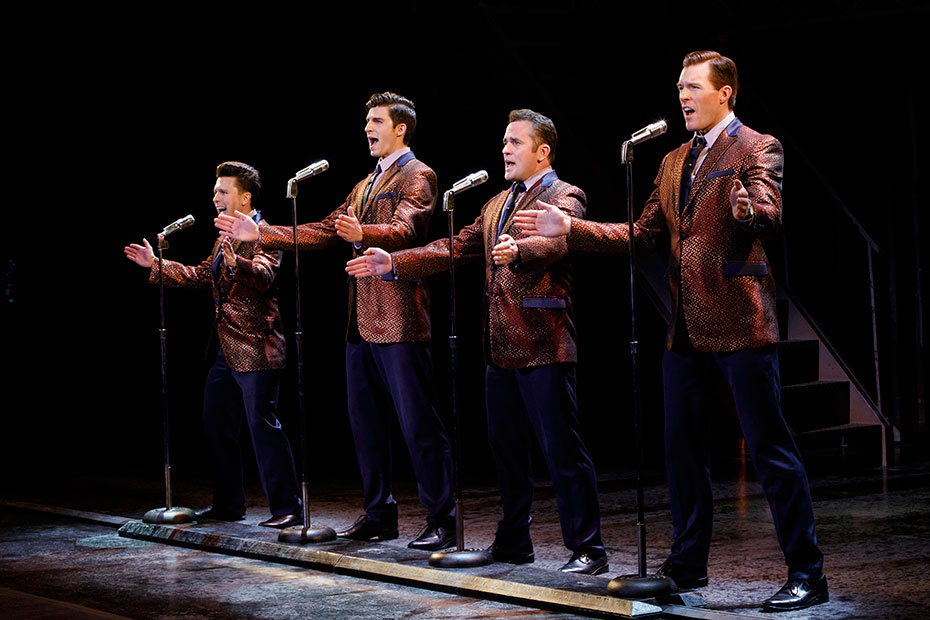 When Jersey Boys opened in 2005, there had only been a handful of successful Broadway jukebox musicals, including Smokey Joe’s Café, Movin’ Out, and Mamma Mia. So, Jersey Boys was more of a novelty than the norm.

Since Mamma Mia opened in 2001, 21 jukebox musicals have opened on Broadway, including two this season, Summer: The Donna Summer Musical and Head Over Heels. And the jukebox genre has even made its way to the big screen with film versions of Mamma Mia, Jersey Boys and movies like the current Queen biopic Bohemian Rhapsody. In my opinion, it’s an oversaturated market. Maybe that’s one of the reasons why when the current national tour of Jersey Boys opened earlier this week at The Duke Energy Center, it felt a little passé and formulaic. But that didn’t stop the Raleigh crowd from enjoying every musical moment.

Jersey Boys is the backstory of Frankie Valli and the Four Seasons.  It’s a musical journey that spans a timeline of forty plus years, from the band’s first hit single “Sherry,” to one of their last, a remixed dance version of “December 1963, Oh What a Night.”

The show opened on Broadway in 2005 and won four Tony Awards, including Best Musical, and a Grammy. It closed in 2017 after an 11-year run and reopened off-Broadway ten months later.

This is the 13th touring season of the production, and it’s a scaled-down version of the show designed to fit into smaller venues like The Duke Energy Center.

This time around, Corey Greenan (Tommy DeVito), Eric Chambliss (Bob Gaudio), Jonathan Cable (Nick Massi) and Jonny Wexler (Frankie Valli) play The Four Seasons. Greenan has been with the tour for three years, and Wexler has been with the tour for four. Both are stepping back into their principal roles for the second consecutive year. And it’s the pair’s level of experience, familiarity, and confidence with the material that anchors the show and brings forth the best performances of the night.

Presenting this show in a smaller venue also changes the overall feel of the production. The set, albeit smaller, is similar enough to the original that it is inconsequential. The talent is comparable to any Broadway production. And at the helm of this production is Tony Award-winning Director Des McAnuff, who directed the Broadway production and retains creative control. In fact, McAnuff continues to bring his bit of stage magic to the jukebox genre, directing this season’s Summer, as well as next year’s Ain’t Too Proud, The Life and Times of the Temptations.

But what feels different in a 600-seat theater versus a 2600-seat venue like the Durham Performing Arts Center, where the national tour played in 2012 and again in 2015, is the palpable energy resonating throughout the room. There is an intimacy here that makes this version feel more like a tribute concert than a big Broadway show.

And that’s good for the fans of Jersey Boys, who clearly filled the seats of The Duke Energy Center on opening night not to hear a retelling of the ragdoll to riches story for the umpteenth time, but to hear the music that became a distinctive sound of a generation.

While some, including myself, may seem immune to the Jersey Boys charm, there is no denying the indelible impact this boy band has had on pop culture and music today. And I must say, it was fun to watch some of the older people here in Downtown Raleigh, including my mom, revel in the nostalgia of it all. She sang, she clapped, and even howled like a teenager attending a taping of “American Bandstand” for the boys in the matching suits. There were even some folks in the first row who were squeezing their sweeties ever so tightly while swaying to the music like two kids in the back of dad’s Chevy or something. And I guess that throwback to perhaps a simpler time is the draw of Jersey Boys that still resonates with fans after all these years and keeps audiences coming back for more.