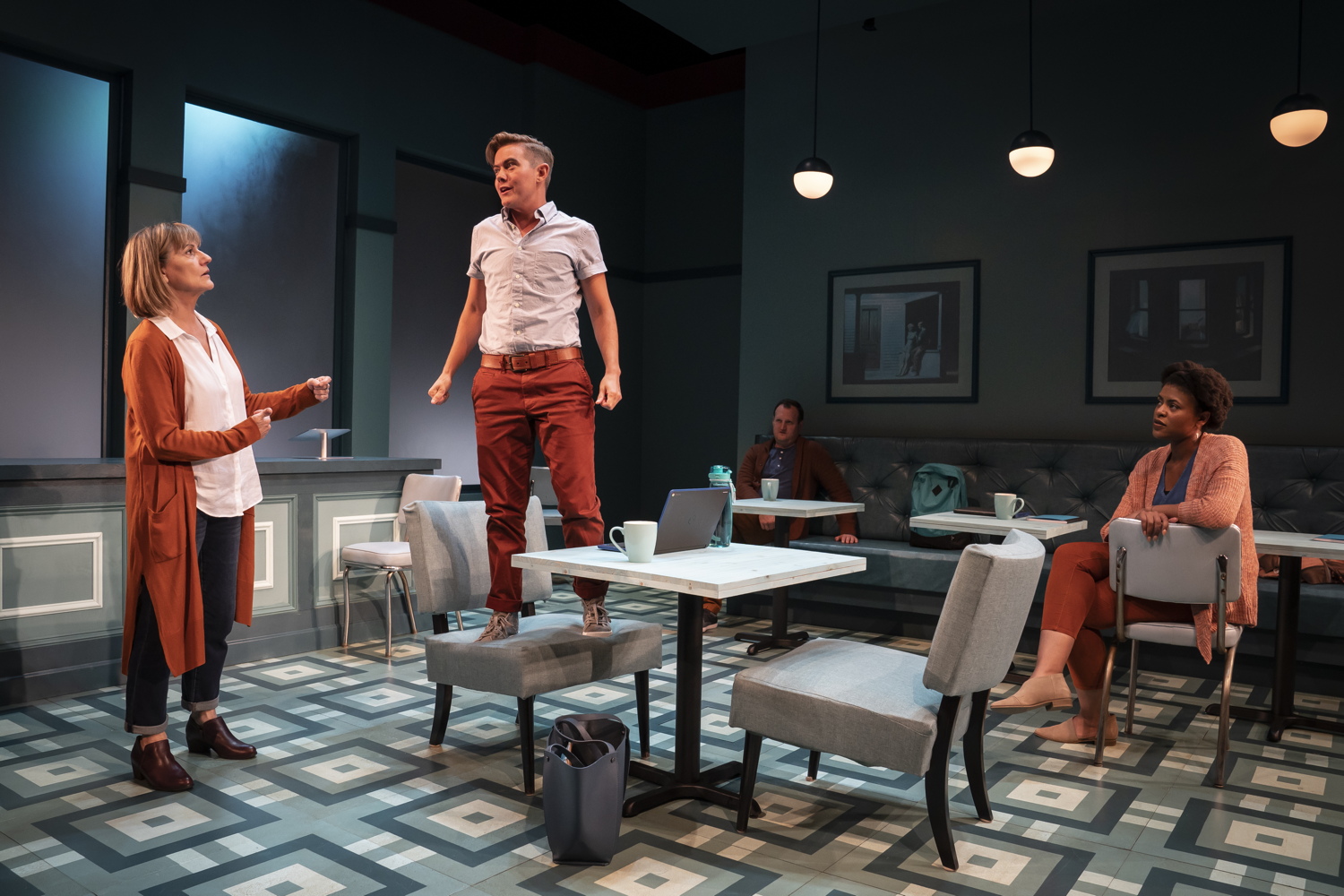 I have always thought that I would make a pretty good advice columnist, one of those people who answer letters with signatures like Akron Mom, Baffled in Boston, or Utterly Lost with (hopefully) sage advice about how to deal with their issues. After seeing Victory Gardens’ Chicago premiere of Nia Vardalos’ Tiny, Beautiful Things, though, I have my doubts. This exquisite play, based on Cheryl Strayed’s experience as an online advice columnist named Sugar and her book of the same name, provides an example of what a truly great advice columnist would look like, and I don’t think I could ever really live up to it. Then again, I’m not altogether sure anyone could.

Strayed’s absolute transparency about the sometimes painful events of her life, which Sugar frequently uses as an example, is daunting. So are the myriad matters, sometimes humorous but at others deeply painful, that she deals with regularly from her readers. I’m a theatre reviewer and I often spend hours figuring out what I want to say about a show and whether I should recommend it; how could I ever deal with serious and personal matters of the heart and—harder still—powerful issues like rape, incest, or grief? Who am I to give people advice? And could I really live with myself if I ever discovered that taking my advice made something worse?

Tiny Beautiful Things has a simple premise: Strayed/Sugar (here played by Janet Ulrich Brooks) sits in a cafe answering letters from her readers that are presented by three actors representing all of the letter writers (August Foreman, Eric Slater, and Jessia Dean Turner), and then she answers them as her heart tells her to. (In the original production, the set showed Strayed’s messy, lived-in home; here it is a pristine cafe designed by Courtney O’Neill and lit by Rachel K. Levy. Either works, but I think the messy home symbolizes Strayed’s brain and the nature of the letters better.) Inventive director Vanessa Stalling (Court’s Photograph 51, Timeline’s A Shayna Maidel) has the job of taking what could easily turn into a visually stagnant play and breathing life into it. Stalling achieves this goal by shifting the actors around the set, providing various stage pictures while Levy’s lights create mood and focus changes.

As Sugar, Brooks is afforded much more leeway to be sympathetic and emotionally candid than, say, in her recent roles as Queen Elizabeth (The Audience) and Maria Callas (Master Class). As good as she was in those roles—and she was stellar—she has a natural empathy that is highlighted when she plays more approachable characters. Strayed agrees to take on this advice column without knowing exactly what she is getting herself into, and Brooks is not afraid to show Sugar’s vulnerability. To one letter writer, she describes herself as “a woman standing naked in the light of day. She’s flawed, but okay with that.”  And that is how she approaches her assignment: with raw, naked honesty that might be flawed but she’s okay with that.

Seeing her readers sharing their often painful lives, she opens up about truths in her own that are equally painful: the death of her mother, her sexual assault, her non-relationship with her father, the lost time she spent addicted to drugs, etc. One of her readers asks, “Did you just make this about yourself?” which leads her to explain that “I will be open with you. I will be bare. I will show you my brokenness and my strengths and I will do my best to offer my best, tough, sweet, and even occasionally contradictory advice.” Her sincerity wins them over and her transparency becomes her greatest strength.

Each of the other actors is allowed multiple powerful moments as they take on the roles of the letter writers. Among other parts, Turner takes on one role as a woman who asks, “When do I have to take that big step and say ‘I love you’? And what is this love thing all about anyway?” Foreman, transgender themself, tackles one letter from a young transgender man seeking advice about his relationship with his parents. Another memorable moment comes from Slater as a man who has lost his son and wonders how he can possibly move on.

None of this is to suggest that Tiny, Beautiful Things is wall to wall seriousness. As I noted earlier, it isn’t. There are many wonderfully comic moments as well, and all of the actors play them beautifully. You’ll laugh. You’ll probably cry, too. In the end, though, you’ll find yourself in awe of the kind of woman who can be so openly and publicly herself to total strangers. Cheryl Strayed (who is also the author of Wild, among other things) is the kind of person you wish could be your friend, as Vardalos’ script tenderly shows. Not everything about this play can justifiably be called “tiny,” but there is no doubt that it is beautiful. You’ll be talking about this elegant and deceptively simple play to everyone you know. It is the embodiment of honesty and love, and you shouldn’t miss it.