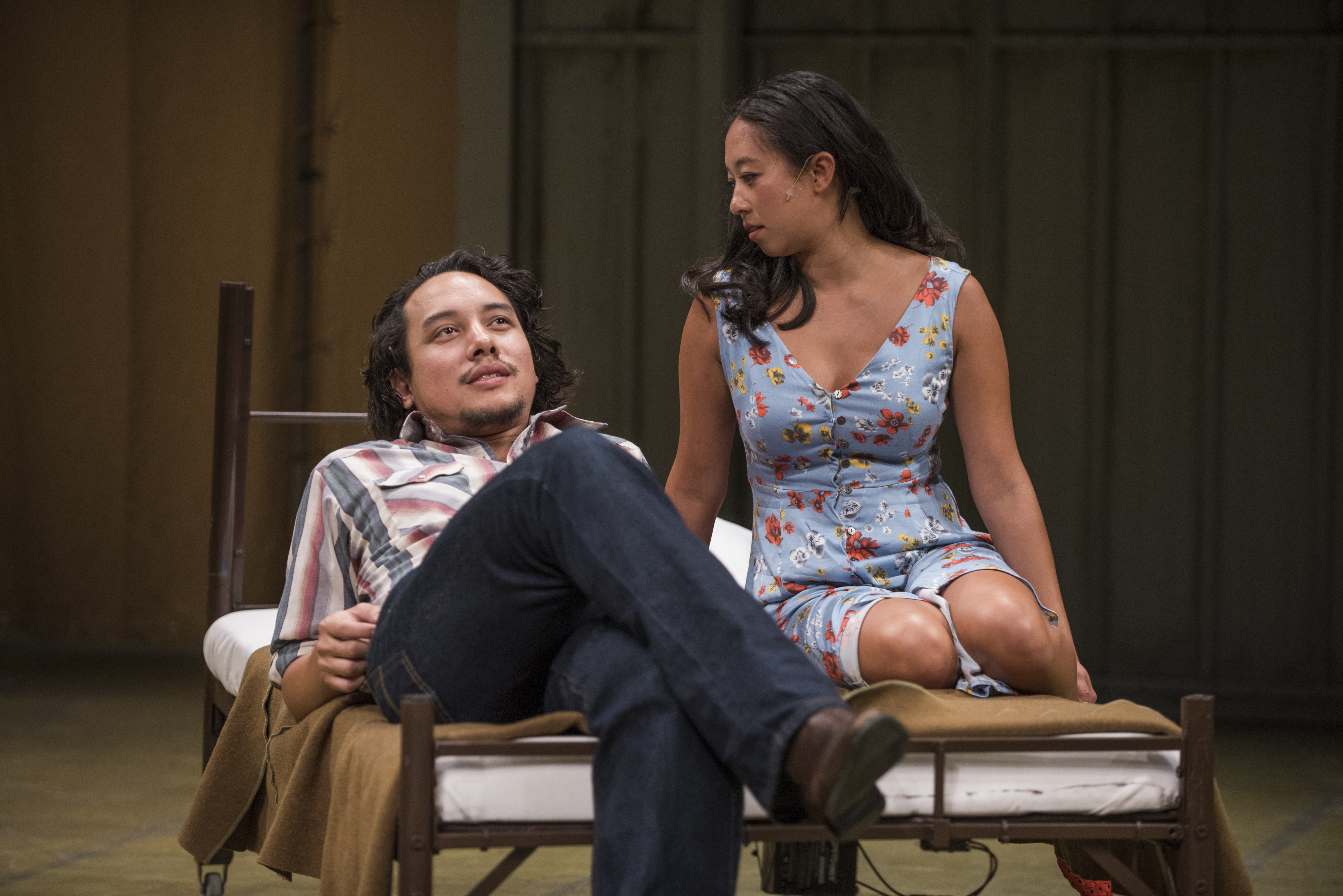 Vietgone, appearing at Writers Theatre in Glencoe at the same time as Crazy Rich Asians is topping box office charts in movie theatres, is a sign of a new era of more inclusive entertainment that allows Asians to tell Asian stories. And this play does more than that: it takes back a story that most Americans think they know, telling the tale of the end of the Vietnam War from the perspective of the Vietnamese who immigrated to America in its aftermath. However, Vietgone is not a war story; it is the tale of two people who meet by chance and, despite the odds, end up together. In other words, it’s a love story.

This is not in any way, though, like any other love story you’ve ever seen. Tales of love and the fall of Saigon have been done before (hello, Miss Saigon), but never from the Vietnamese point of view. And this one, unlike the mega hit musical, is a mostly upbeat, positive, very funny tale notwithstanding rap music interludes that mainly access the characters’ anger and frustration. Yes, I said rap music, for though that genre didn’t even exist in the 1970s, it strongly influenced the playwright, Qui Nguyen, who grew up in the 90s, and whose parents’ story this just might be. In fact, many of Nguyen’s interests, including buddy travel films and motorcycle chases, feature in his play, the bulk of which takes place in the immediate aftermath of the war. And director Lavina Jadhwani combines all of these into a pastiche that, though out of chronological order and often interrupted, somehow seems smooth and flawless.

Quang (Matthew C. Yee) is a former officer in the South Vietnamese army who finds himself expatriated without his beloved wife and their children. From the second he lands in Fort Chaffee, Arkansas along with thousands of other refugees, all he wants is to find a way back to his home country. South Vietnam is gone, of course, but Quang’s desperation cannot acknowledge that fact. What he can acknowledge is Tong (Aurora Adachi-Winter), another refugee who is a self-proclaimed “bitch” who does not believe in love, which of course doesn’t stop Quang from falling for her. What they begin with, though, is sex. Lots and lots of sex. (This show would be R-rated as a movie both for sexual content and language: almost every swear word you can think of is thrown about multiple times.) They both acknowledge that they are having fun and that their time is limited, for Quang desires to use the motorcycle he has found to drive across the country to Fort Pendleton in California and then catch a plane to Guam and ultimately, Vietnam. 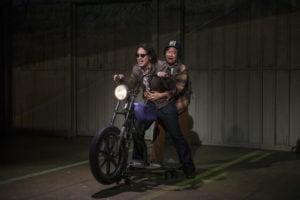 His motorcycle trip, which forms a kind of spine for much of the play, is accompanied by his best friend Khue (Rammel Chan), a tempering force for Quang’s hot blood. (Aside from Quang and Tong, a small ensemble of three plays all remaining characters. Chan also plays Tong’s brother Nhan, who remained behind by choice in Vietnam, in flashbacks, as well as other characters.) Along the road, Quang and Khue run into many people such as hippies (a delightful Emjoy Gavino and Ian Michael Minh) and a Confederate flag-flying redneck cyclist (Minh again). Back at Fort Chaffee, we see Tong and her mother (Gavino) at first fending off and then succumbing to the charm of an American serviceman (Minh). All of this plays out on a simple set designed by Yu Shibagaki replete with sliding panels and a few roll-on set pieces, along with clever lighting and sound (by Sarah Hughey and Kevin O’Donnell, respectively) and projections by Rasean Davonte Johnson. The projections, especially, create the illusion of multiple locations.

About the music: composed by Gabriel Ruiz and choreographed by Tommy Rapley, the songs take us into the minds of both of our angry protagonists. Yee and Adachi-Winter both rip themselves raw in their selections, tapping wells of emotion, both hopeful and impassioned, that the structure of the rest of the play doesn’t allow them to locate. Both actors prove themselves highly adept at this art form, and it is very important. Nguyen uses rap as well as 90s vernacular to effect a blending of time, for this may be a first generation story but it is told from a second generation perspective. 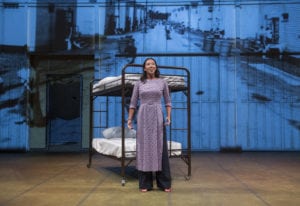 Another very clever thing that Nguyen does is to treat Vietnamese as the base language here. All Asian people speaking that language speak in completely natural English, whereas Americans trying to speak it end up using nonsense phrases (like “Cheeseburger Botox”) to indicate how poor their grasp of the language is. The effect of this is to remove the “otherness” that those with thick accents automatically have and to make the Americans the “others.” Jadhwani makes use of this to wonderfully comic effect with the character of Bobby, the serviceman in love with Tong.

Vietgone is a play unlike any other you have ever seen. In all of its honest anger and frustration, in its re-examination of the role of Americans in Vietnam, in its glorious road sequences, in its truly hilarious dialogue, it combines so many elements in a single play that it is totally captivating. And on top of that the central love story, which spans forty years, is beautiful and familiar and allows the (mostly white) audience to enter the world of the play easily. This is one of the first plays of the fall theatre season, and it will almost certainly turn out to be one of the best.

Vietgone is now playing at the Writers Theatre, 325 Tudor Ct, Chicago, until September 23. Performance times vary; check the website at Writers Theatre for tickets, schedule and times. Find more information about current plays on our Current Shows page and at theatreinchicago.com.