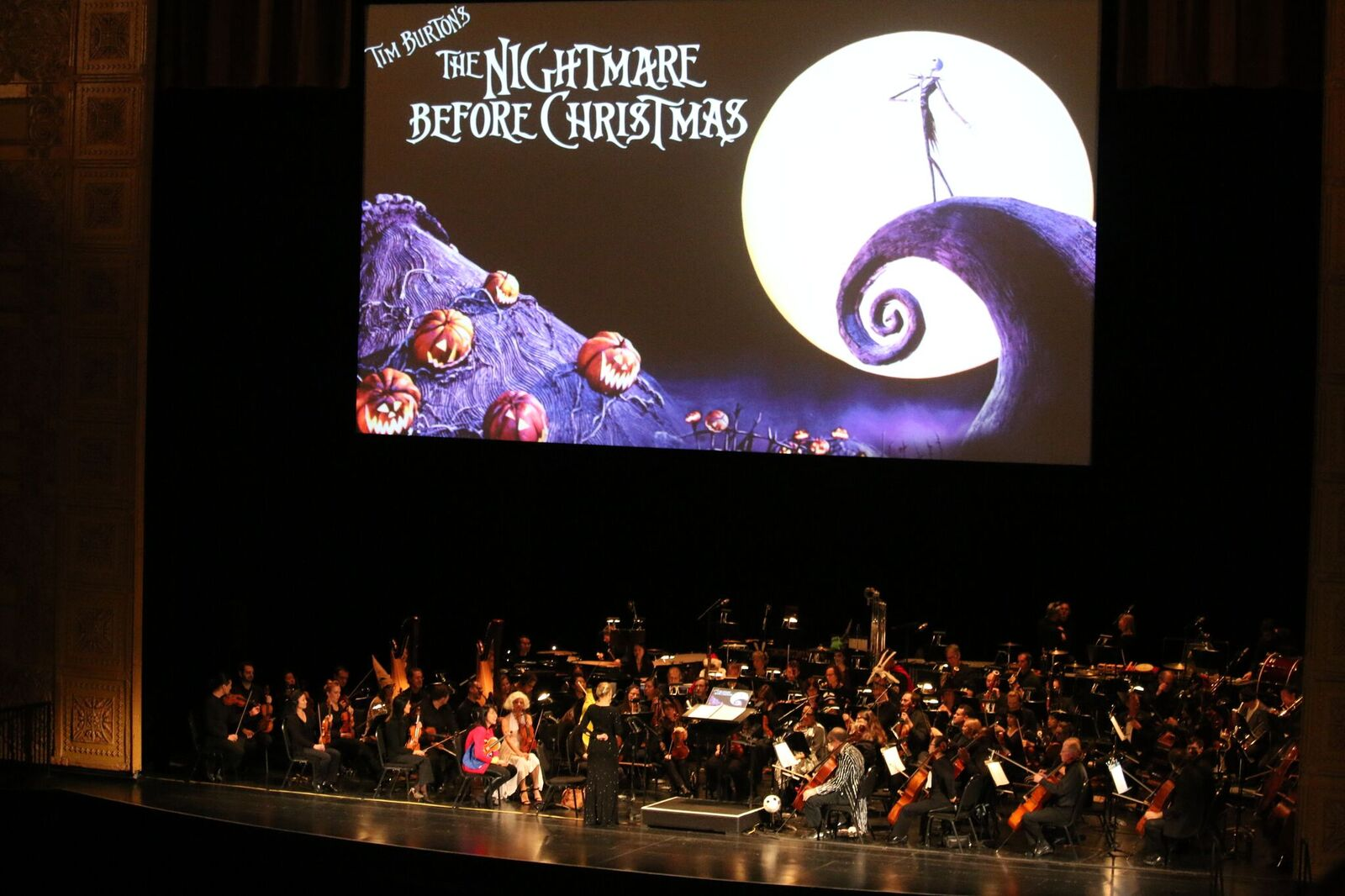 Boys and girls of every age/ Wouldn’t you like to see something strange?/ Come with us and you will see/ This, our town of Halloween! –From “This Is Halloween” in The Nightmare Before Christmas

She wasn’t sure if she wanted to wear her costume. My fourth-grade-daughter is pretty crazy about her pink pig costume–which, by the way, doubles as footie pajamas a lot of nights–but she wasn’t really sure if it was going to work where we were going. Ok, seems reasonable, I thought, as she debated putting on her PJs. Honestly, I wasn’t sure what we were in for either. Don’t get me wrong, I had a good feeling. We were on our way to see Tim Burton’s The Nightmare Before Christmas (a classic!) at the Auditorium Theatre (also a classic!) with the Chicago Philharmonic (love them) on stage playing the score along with the movie. And the press release mentioned there would be trick-or-treating and games in the lobby before the show, so it seemed like a good place for the pink pig costume, but neither of us was so sure.

However, and I say this with a fair degree of certainty, only because I am not really a Halloween guy and I want to be able to back out (see, no fun)… If there is one event to which I would consider wearing a costume next year at Halloween it would be The Nightmare Before Christmas at the Auditorium Theatre with the Chicago Philharmonic.

Why? Because I strongly believe that going to see Tim Burton’s Halloween/Christmas movie musical played by Chicago’s finest orchestra at the iconic Auditorium should be the next big Chicago holiday tradition, and I want to do everything I can to support it.

In a word… it’s Spook-tacular. Just kidding, that’s not actually a word. But is it Fang-tastic? Um, yes, but that’s also not really a word. Then it must be ghoulishly delightful? Well, those are both words–and don’t get me wrong, it is most definitely spook-takular, fang-tastic, and ghoulishly delightful–but none of those are the words I would use (even though I just did). I believe going to see The Nightmare Before Christmas at the Auditorium Theatre should be a Halloween Holiday tradition because it is blood-curdlingly, bone-chillingly, hauntingly, horribly, darkly, dreadfully, fear-inspiringly… fun.

Like a witch’s brew mixed up in what turns out, for the sake of this metaphor, to be an iconic, National Historical Landmark theatre cauldron, the show has a healthy dose of magical ingredients.

Tim Burton’s The Nightmare Before Christmas uses stop-motion animation to tell the darkly comic story of Jack the Pumpkin King. Jack is bored with Halloween. Or maybe it’s a bit more accurate to say that he is overcome by its limitations. In an early film lament, he dreams of doing something different with his life (death) and wanders out of Halloween Town and away from its cast of oddly lovable characters in search of fulfillment. There he discovers the door to Christmas Town and whole new holiday to haunt. In the twenty-six years since it opened in 1993, The Nightmare Before Christmas has become a much-loved classic of what was then a new and deeply creative stop-animation form.

Next into the brew, add a touch of world-class orchestra.

In a season now barely more than a month old, the Chicago Philharmonic has already demonstrated its extraordinary versatility with its utterly profound and deeply moving opening performance of Tchaikovsky’s “Pathetique” (I was crushed) and its flawless execution of Philip Feeney’s magnificently complicated score for the Joffrey’s Jane Eyre (I was awed). Conducted by Thiago Tiberio, the Philharmonic stole the show with its high energy, macabre, spookily Christmas(ish) rendering of Danny Elfman’s darkly beloved score. It looked and sounded like a lot of fun, but it couldn’t have been easy. With plenty of Pizzicato to build the suspense and a hefty dose of ominous deep dark bass and cello, not to mention the eerie melody of the winds, the Orchestra drove hard through “This is Halloween” and “What’s This?”, the film’s first act songs, only to arrive at a rare intermission mid-point standing ovation. The first of two. With many musicians in costume, the orchestra proved every bit as fun to watch as the movie.

In a nod to “Chicago’s Landmark Stage.” the Auditorium Theatre’s vision for a family theater event complete with trick-or-treating and games gave the show and theater extraordinary energy. Some people came because they love the film, some because they love the Phil, some because they love Halloween. Children and adults took the opportunity to dress up as any of a host of Halloween favorites, including characters from the movie like Jack the Pumpkin King or Sally, the broken, lovesick, rag doll stuffed with leaves. And one kid got to the theatre, took a good long look around, and then went and put on her pig costume!

And the results? Spellbinding… fun!

Chicago Celebrates Sondheim is the next production playing at the Auditorium Theatre at 50 East Ida B. Wells Drive, Chicago on November 16. Check the website for specific dates, times, and tickets. Find more information about current plays in our front page recs and at theatreinchicago.com.