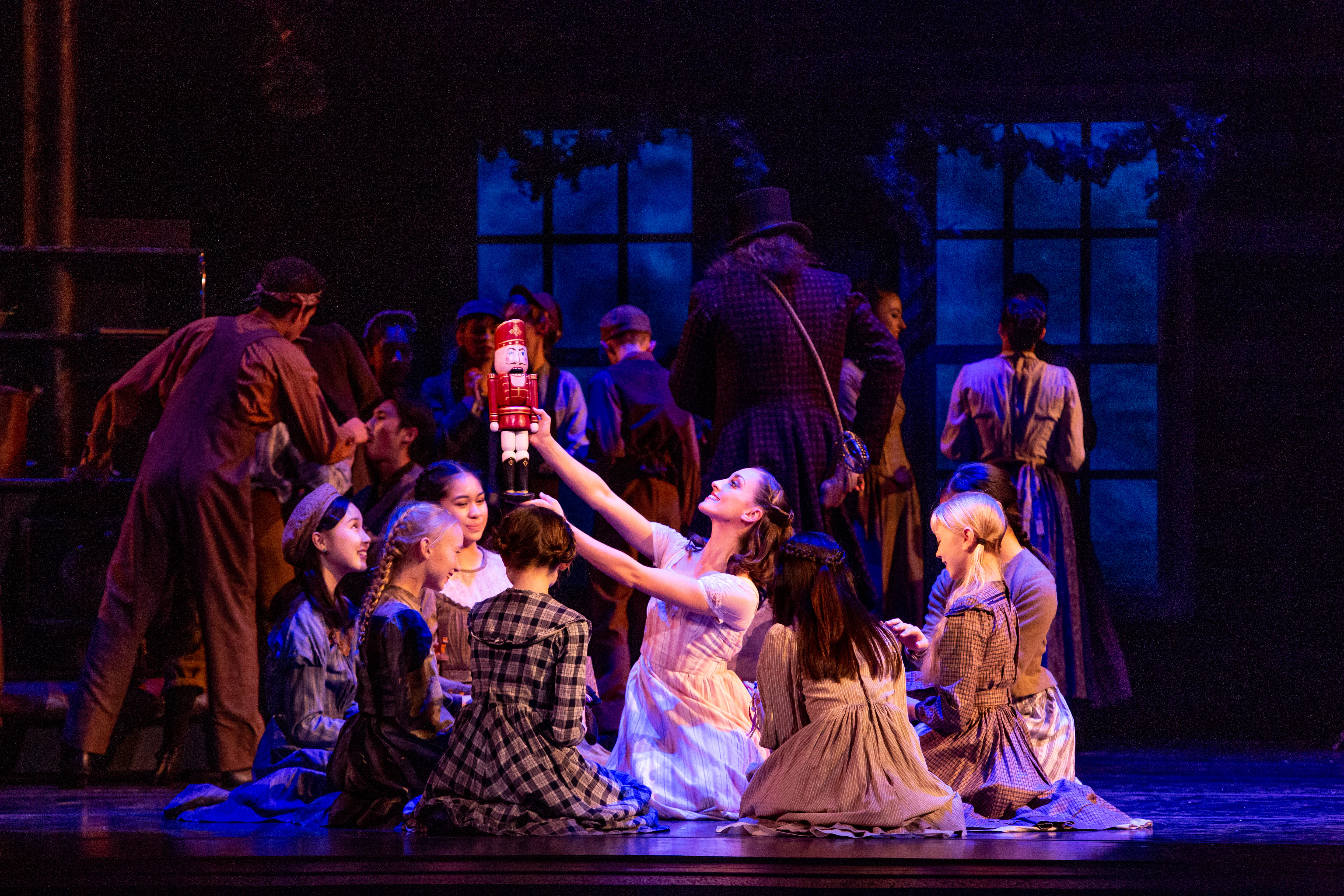 We got all dressed up. On the drive into the city, she asked if we could listen to the Nutcracker Suite the whole way. I told her “of course” because she’s my beautiful eight-year-old ballerina and this was our special day together–not to mention I like the music anyway, and now that it’s December and Thanksgiving is behind us we have agreed we can officially listen to holiday music whenever we want. She fell asleep fifteen minutes later, but I left it on for the rest of the drive.

Now that The Nutcracker is underway this holiday season at the Auditorium Theater, it’s time to acknowledge that Christopher Wheeldon, Ashley Wheater, and the Joffrey Ballet have pulled off nothing short of a Christmas miracle. With Brian Selznick’s mesmerizing story adaptation, Scott Speck and the Chicago Philharmonic Orchestra’s innovative take on Tchaikovsky’s original score, and a world-class company of dancers, they’ve taken a ubiquitous holiday tradition–an institution in the ballet world often reinterpreted but never really changed–and delivered an even more beautiful, visually stunning, utterly compelling, gorgeously danced, surprisingly relevant theatrical experience that may ultimately redefine the ballet.

We arrived at the theater with plenty of time to get our hot chocolates and find our seats. After we sat down in seats 3 and 4 of row M, she immediately looked through the program at the cast sheet to see who was dancing Marie, the part she dreams about dancing.

Now in its third December run, the Joffrey’s Nutcracker has grown more rich and complex with passing each year, as Wheeldon has continued to fine-tune the choreography and dancers like the brilliant Victoria Jaiani, Jeraldine Mendoza, Dylan Gutierrez, and Miguel Angel Blanco refine their roles and discover unexplored moments within the reimagined ballet.

Since the first performance in 2016, Selznick’s Nutcracker has proven to be a brilliant update. As the author of award-winning books like The Invention of Hugo Cabret, Wonderstruck, and The Marvels, his story of an immigrant family’s Christmas celebration on the eve Chicago’s 1893 World’s Fair is a vivid blend of rich historical detail and real-world magic. He dispatches with the old-world European aristocratic crust of the original Nutcracker in favor of a Chicagoized cultural melting pot of hard-working immigrant dreamers. He has re-envisioned the former second act’s youthful dreamscape “Land of Sweets” and replaced it with a “Tour of Nations” at the World’s Fair Pavilion, set against the backdrop of the “White City,” including the Columbian Exposition’s revolutionary Ferris wheel. Most important, Selznick shifts the focus of the ballet from a wealthy young girl’s beautiful dream after a super swanky party to a poor immigrant girl’s dream of her family, together, moving toward a new and better future.

She was mesmerized the moment the lights went down as she watched the set light up with brightly colored posters from the World’s Fair and the outline of the Columbian Exposition in the distance, but once the ballet began she only cared about the dancers. She watched Marie dance on stage in front of a fence guarding the fair, and she barely seemed to notice as the set transformed around her into an immigrant’s shack on the outskirts of the “White City.”

The Joffrey’s Nutcracker begins on Christmas Eve, five months before the opening of Chicago’s Columbian Exposition of 1893, at a party in the humble home of Marie (danced with beautiful expression by Anais Bueno) and her Eastern European immigrant family, held together by her mother, danced to perfection during Saturday’s opening by Jeraldine Mendoza, and her street urchin brother, Franz (Bennet Parker). Here we meet Marie’s vibrant set of extended family and friends, all workers at the fair, including a three-piece trio playing their own decidedly folk dance versions of the Russian composer’s first act suite.

Into to this scene enters The Great Impressario (danced by Dylan Gutierrez, who follows up his stellar showing in Swan Lake this autumn as the Principal Dancer with another outstanding performance). Part magician, part fair planner, the Impressario gives gifts to the children including a Nutcracker for Marie, but, with a new twist by Selznick, he falls quickly for Marie’s mother. Here the chemistry between Gutierrez and Mendoza is evident as they deliver a flawless series of moments together both in the first act and again later when Marie’s mother assumes the role of Queen of the Fair.

In Selznick’s books, the text of the story dances with his strange and compelling images and the meaning rests, somehow, between the two. With his vision for The Nutcracker, the words on the page are replaced by music and the images are supplied with brilliant artistry and creativity by Julian Crouch, Natasha Katz, and Basil Twist, who bring together a brilliant mix of projected advertisements for the fair, the iconic–and now digital–fast growing tree, fantastic puppets, enigmatic masks, and screen silhouettes that give the feeling the stage is a Selznick book brought to life. Between the music and the vivid imagery, the meaning is, of course, the dance. And here, Wheeldon once again delivers a masterpiece. As the ballet moves from the Christmas party to Marie’s dream, he weaves together the best-loved elements from Petipa and Ivanov’s original choreography with his own profoundly creative ballet moments.

At intermission, it was time for another hot chocolate and a quick picture with the Nutcracker poster in the lobby. In the second act, we held hands as we toured the World Pavillion with Marie and the Queen of the Fair. Her eyes were wide as she took it all in. I don’t think she blinked.

With the beginning of the second act, the rats have been defeated, the Nutcracker Prince is redeemed, the Snowflakes are beautiful, and Marie gets her man (Greig Matthews), and now the storyline gives way to the pure joy of watching the Joffrey’s amazing dancers put on a captivating tour of the late 19th century. With their Arabian dance, Victoria Jaiani and Temur Suluashvili deliver a sensual and utterly breathtaking pas de deux. Rory Hohenstein subs in for the Russians and has a blast as the rope twirling Buffalo Bill. Elivelton Tomazi gives an electric, athletic, fantastically fun performance as the Chinese Dancer, while two flaming orange dragon puppets run circles around him. And Fernando Duarte brings the house down with his hilariously ridiculous Mother Nutcracker atop the rolling gingerbread house.

Here’s the thing. I can tell you about the history of The Nutcracker and all of the reasons why the Joffrey’s version is so special. I can tell you about Christopher Wheeldon’s genius for infusing complexity, style, and energy into a timeless treasure, while remaining faithful to the best-loved parts of the old version. I can tell you about Ashley Wheater’s brilliant vision for the Joffrey and how his work over the last ten years has built the ballet company into one of the finest in the world. I can tell you about Scott Speck’s boundless energy and the way his Chicago Philharmonic Orchestra flowed masterfully through the libretto, from ethnic variations for a trio, to Tchaikovsky’s most bombastic second act moments. I can describe what it’s like to spend more than a few of my nights reading Brian Selznick’s brilliant books to my children only to find myself watching his story come to life with the extraordinary set design of Juliana Crouch. I can tell you how perfect Jeraldine Mendoza was in her roles, first as Marie’s Mother and then as the Queen of the Fair, and how impressive Dylan Gutierrez was as the strong, tender, and a little bit magical Great Impresario. And I would never, under any circumstances, hesitate to tell you that Victoria Jaiani and Temur Suluashvili took the always show-stopping Arabian dance to a whole new level. In fact, if the entirety of The Nutcracker consisted of nothing more than their 4ish minutes of Arabian, I almost certainly still buy a ticket.

I can tell you a lot about The Nutcracker, but I’ll never quite be able to find the words to describe the look on my eight-year-old daughter’s face as she watched this beautiful ballet… how it moved her… what it meant to her. And I’ll never be able to describe the dreams she dreamed the night after we went together to go see the Joffrey’s modern holiday masterpiece.

The Nutcracker is produced by The Joffrey Ballet and is now playing at the Auditorium Theater, 50 E. Ida B. Wells Drive until December 30. Performance times vary; check the website at www.joffrey.org. Find more information about current plays in the Chicago area on our Current Shows page and at theatreinchicago.com.