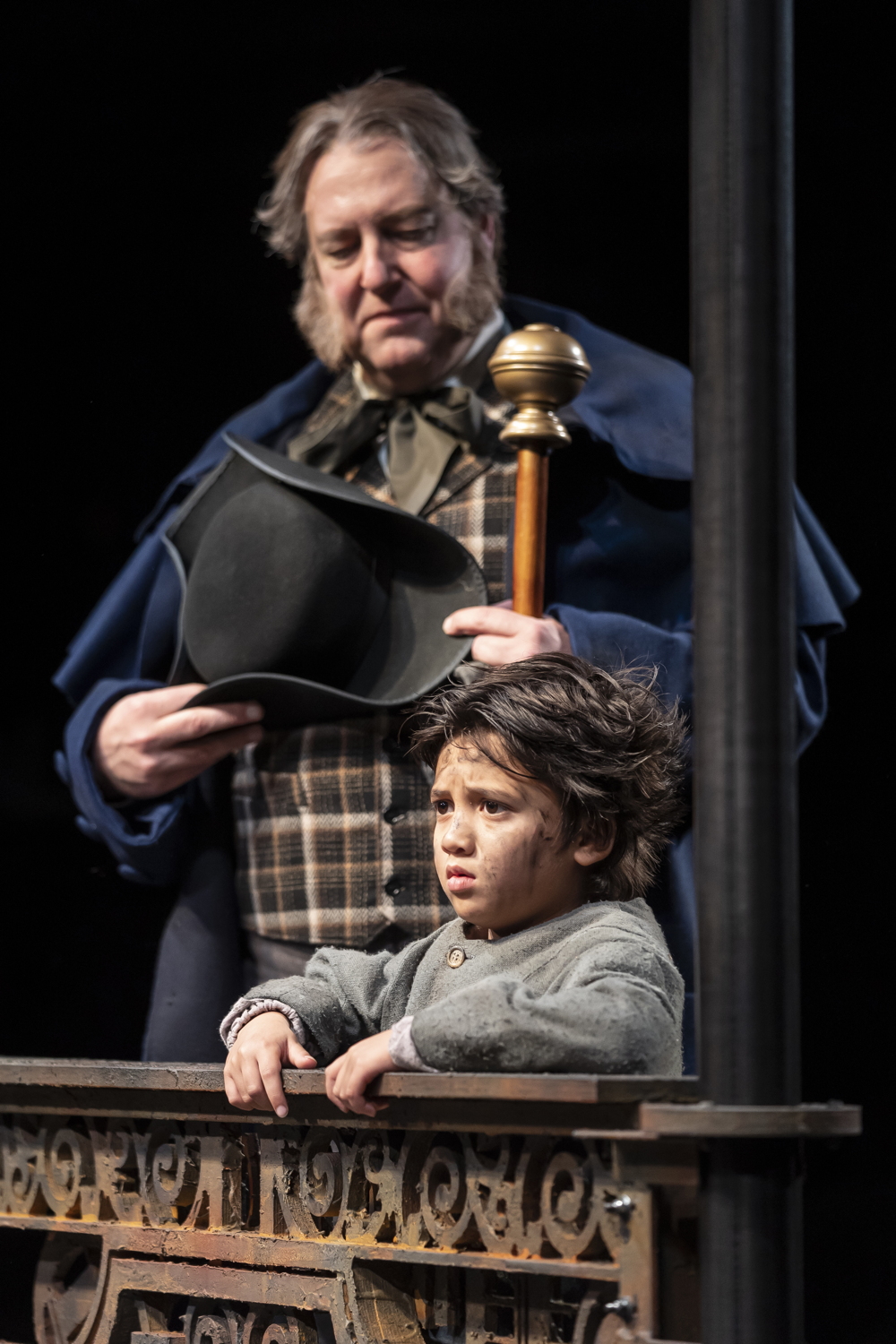 There is something truly wonderful about Oliver!, Lionel Bart’s musical take on Charles Dickens’ Oliver Twist, that has long made it one of my very favorite shows. Whether light and bouncy (“I’d Do Anything,” “Consider Yourself”), pensive (“Where Is Love?” “Boy For Sale,” broadly comical (“Oom-Pah-Pah”) or dark (“As Long As He Needs Me,” “Oliver!”) this is a musical of many moods that, done well, can’t fail to entertain. Add to this an eight-time Jeff Award-winning director (Nick Bowling) and a stellar cast that includes luminaries like William Brown and Bethany Thomas as well as talented younger stars like Lucy Godinez and a host of child actors led by Patrick Scott McDermott’s Artful Dodger and Oliver himself, played by Kai Edgar and Kayden Koshelev, and you have the foundation of a truly enjoyable evening.

Jeffrey Kmiec’s clever set design on Marriott’s iconic theatre-in-the-square stage gives Bowling plenty to work with as set dressing far more complex than that usually seen here comes and goes in precision transitions all night long and actors populate every available space. The opening moments set up what we will be seeing, as an elaborate upper-class dinner greets the audience, which then becomes aware of the ragged group of workhouse orphans trudging dolefully in. They march on past the stage with its elaborate meal, only to stand in one aisle, tongues hanging out, singing about their dreams of having plentiful amounts of “Food, Glorious Food.” Finally, they can’t hold back any longer and rush the stage in a fantasy food orgy that chases off the wealthy diners and seamlessly leads to them all seated at the long table with bowls of gruel.

It’s a brilliant bit of staging that dives right into Dickens’ world of haves and have-nots, and when tiny Oliver asks for more, the expectations of both worlds collide, causing Mr. Bumble (Matthew R. Jones) to take him off and sell him for three pounds. Jones is wonderful in this role whether demanding obedience of the orphans or flirting with Thomas’s Mrs. Corney. But of course things go wrong out in the real world and Oliver ends up falling in with a gang of pickpockets working for Brown’s Fagin. Brown is a gentler, more loving Fagin than some I have seen, which makes it all the more understandable that this tribe of lost boys gravitate to him. His tender touch in welcoming Oliver to the gang meshes well with his almost childlike fondness for the jewels he is hoarding against the need for a quick getaway and his thoughtful rendition of “Reviewing the Situation.”

It’s Godinez’s work as Nancy that really stands out here, though. She commands the stage singing both raucous songs and plaintive ones, and she manages the nearly impossible trick of convincing us that she actually cares for the demonic Bill Sikes (Dan Waller), of whom even Fagin is justifiably afraid. (Waller is indeed menacing in the role.) Nancy, among all of the characters, is really the only one (with the possible exception of Fagin) allowed to have multiple layers, and Godinez works her way through all of them beautifully. All the rest of the characters, from Oliver to Bumble to Sikes to Terry Hamilton’s gentle Mr. Brownlow, live for the most part on the surface of their character descriptions. (This is how they are written, not any comment about the actors, who are universally wonderful.) But Nancy, the thief with a heart of gold, has more depth than any of them.

I have always felt that the climactic scenes of the musical are not at all paced well—very serious matters occur far too abruptly—and Bowling can’t really help that, but in every other way this is a dynamite production. With an army of talented children at the core of the largest cast in Marriott’s history, it is also extremely energetic, as choreographer Brenda Didier utilizes all of their vitality to make every scene with them really pop. And McDermott and Edgar (the boy I saw playing the title role) are terrific. This is truly appropriately youthful casting, and Bowling found in these actors exactly what he needed whether it was Edgar’s sheer innocence magnifying every emotion or McDermott’s cagey and clever (but still so childlike) take on one of Dickens’s most memorable characters.

Even though its dark side is less extreme than you’d expect with abuse, theft, and even murder in its center, this Oliver! is solidly entertaining. Bowling and Marriott have a wonderfully uplifting show that can rival the holiday-themed productions that pop up all over town this time of year. A trip up to Lincolnshire to see this show will make anyone’s life just a little bit finer.

Oliver! is now playing at Marriott Theatre, Lincolnshire, IL, through Dec 29. The show runs 2.5 hours with one intermission. Check the website for specific dates, times, and tickets. Find more information about current plays in our front page recs and attheatreinchicago.com.