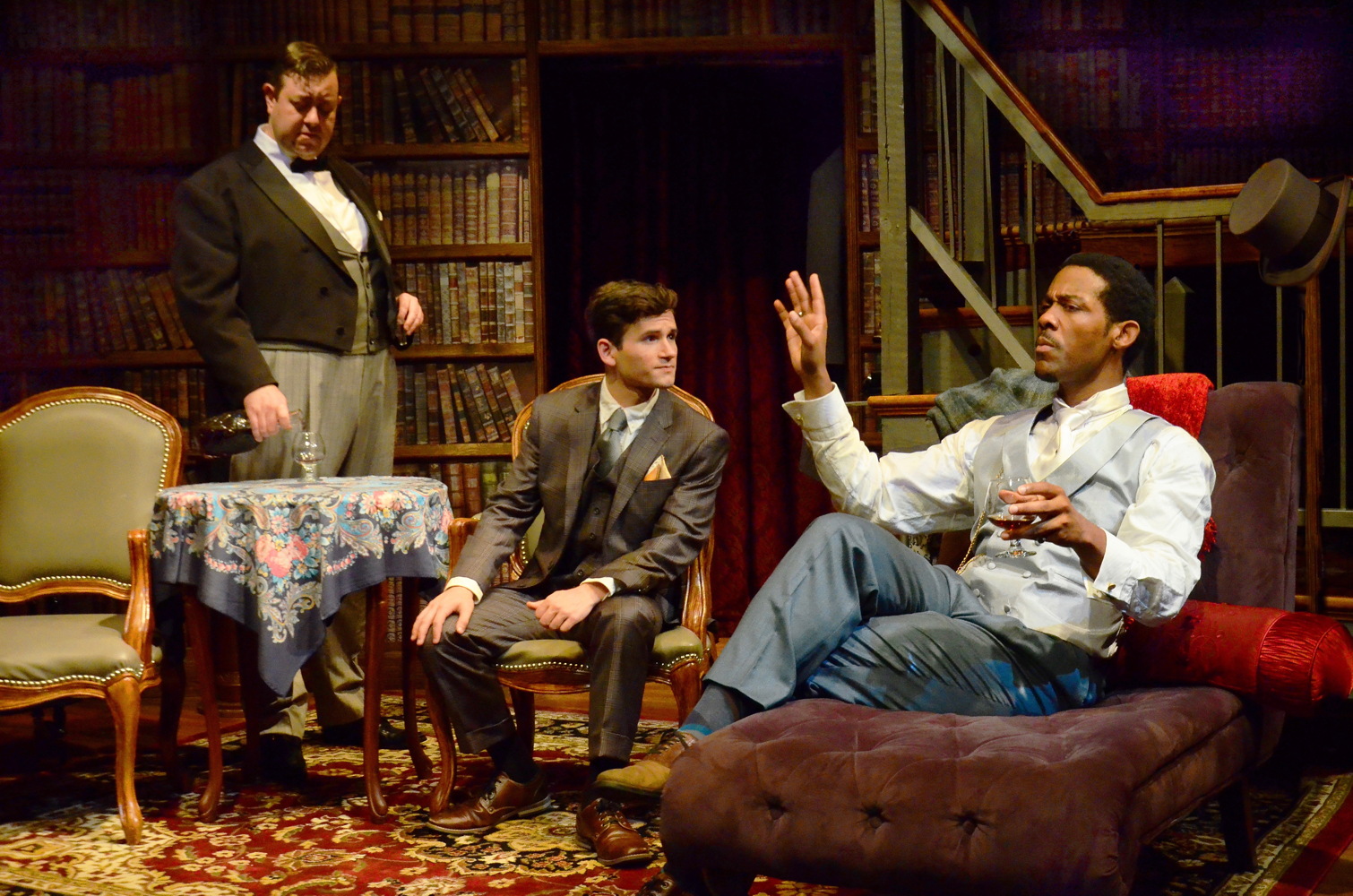 In Dorothy L. Sayers’ 1923 novel Whose Body?, the author introduced the character of Lord Peter Wimsey, a highly intelligent aristocrat suffering from what we now call Post Traumatic Stress Syndrome upon his return from a stint in WWI that included briefly being buried alive, who decides to devote his time and attention to solving mysteries. With the help of his good friends, valet Bunter and police inspector Charles Parker, Wimsey (known as Lord Peter) inserts himself into the investigations of complex and confounding crimes in a popular series of eleven novels and several short stories.

As adapted by company member Frances Limoncelli, Lifeline Theatre’s production of Whose Body? does a fine job presenting the character of the Oxford-educated Lord Peter and the hyper-loyal Bunter (among other characters), and the novel’s central mystery (which is not the question asked in the title). If the mystery, which is well performed by a fine cast and lovingly directed by Jess Hutchinson, ultimately is too easily predictable, the fault probably lies with Sayers, who was working in this genre for the first time.

The plot involves the appearance of a body in the bathtub of Lord Peter’s neighbor Mr. Thipps (John Drea), naked save for a pince-nez, at pretty much the same time as another man nearby vanishes without a trace, with Drea’s Parker leading the investigation. Unfortunately for Thipps, a brutish detective named Sugg (Joshua K. Harris) has already made up his mind, contrary to evidence and logic, that he both killed the man and situated him in the bath, perhaps with the help of a housekeeper played by Michaela Voit. (Sugg’s unprovoked, tunnel-visioned focus on Thipps is very difficult to comprehend.) Sugg, whose antipathy for Lord Peter is obvious, also has decided (again with no evidence) that the man in the bathtub is, in fact, the missing Jewish financier. This guy should be drummed out of the police department for gross incompetence, though he does manage to find one witness who sort of corroborates his thought process, a doctor at a local teaching hospital named Freke (pronounced “Frake” and played by Tony Bozutto).

William Anthony Sebastian Rose II takes on the role of Lord Peter and is marvelous as the sleuth, who is at base something of a caricature of an amateur detective: a young man with nothing but leisure time and tons of money whose idea of a good time is solving crimes. Rose plays him with a warmth and affection that renders him instantly likable even if we are never quite sure exactly why he needs to play this dangerous game. Rose is especially good in his scenes with Scott Danielson’s Bunter: their interesting and complicated relationship making for several memorable moments both comical and poignant. Danielson, who also plays a minor character (as all of the actors save Rose do), shows Bunter to be a protective, grounded presence in the unusual world of Lord Peter. Also caring deeply for Lord Peter is his mother (Kate McLean Hainsworth), who worries that the stress of her son’s involvement in this case might trigger a relapse of his PTSD.

Flashes of that PTSD are handled well by set designer Alan Donahue, lighting designer Diane D. Fairchild, and sound designer Stephanie M. Senior, who also contributes some whimsical—if you’ll pardon the pun—effects in the early narrative. Donahue’s clever multi-level set is able to move us easily among several locations, which negates the need for any long set changes, allowing Hutchinson (who helped her cast of seven to create eighteen separate characters) to keep things flowing throughout the play’s two and a half hours.

If you are a Sayers fan, you are likely to find Whose Body? highly pleasing. The performers embody every character, even the broad caricatures like Sugg, with great attention to making them as real as possible. (One of my favorite tiny moments involves a character simply called “Slavic Lady” who is engagingly portrayed by Voit.) If you can take or leave this genre, Whose Body? is not likely to convert you into a fan. Though it is certainly fun to watch actors of this caliber having such a great time, I prefer more nuanced and surprising mysteries rather than one whose answer I knew before intermission.

Whose Body? is now playing at Lifeline Theatre, 6912 N. Glenwood, Chicago through Oct 27. Check the website for specific dates, times, and tickets. Find more information about current plays in our front page recs and attheatreinchicago.com.