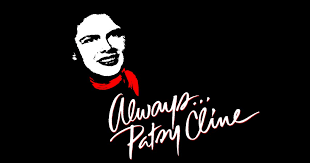 I’m not a huge fan of jukebox musicals. It’s simply too easy to take a bunch of old songs, add a story of some type, and call it a day. That, however, is not what creator Ted Swindley did with Always…Patsy Cline, now playing at the Milwaukee Rep’s Stackner Cabaret. Instead of merely adding a plotline to loosely connect the songs, Swindley took a true and unusual story from the singer’s life and based the show on that: when Cline was out on tour in Texas, she struck up a very unlikely friendship with superfan Louise Seger. Their relationship blossomed quickly, leading Cline to go home with Seger after her gig, and the resulting evening fostered a pen-pal relationship that lasted until Cline’s untimely death in a plane crash. It is the story of that friendship that grounds this musical and sets it apart, and director Laura Braza’s Milwaukee Rep production captures it brilliantly thanks to remarkable performances by her two stars.

Played out on an eclectic set by Emily Lotz that stands in for the Grand Ole Opry, Seger’s home, and the Houston honky tonk where the two meet, the show features Kelley Faulkner as Cline and Tami Workentin as Seger. Faulkner, who is reprising her 2012 Stackner performance, is amazing as Cline. In her dark wig and makeup, she looks exceptionally like the country singer, and her voice is absolutely perfect on 27 songs (!) from Cline’s repertoire. There isn’t a lot of opportunity, as you can imagine from that number of songs, for her to shine with her acting, but that’s not what this character is about. Cline is very much the star who fell to earth in this show: when Seger meets her she is already a famous country singer.We see her in the Opry singing standards like “Walking After Midnight: and “Back in Baby’s Arms.” Seger calls in daily to a local radio station to hear “I Fall to Pieces.” Faulkner’s job here is more an impersonation of Cline than a full-fledged characterization, and she does it exquisitely. Even so, she does have a few very nice moments, most notably her entrance to the honky tonk, sitting alone listening to the jukebox, thoughts whirling through her head and across her face about her current situation, so far away from her baby and all by herself.

Workentin has a riotously good time as Louise, dancing across the stage to her idol’s music, singing along, and getting to show off her character’s various reactions to her star encounter. Upon meeting Cline, Seger is understandably nervous and even reluctant to speak to her. The star-struck fan manages to do it, though, and even gets Cline a more favorable contract for that night’s show by some bravado with the man who runs the honky tonk. Proclaiming herself Cline’s “manager,” she demands two sets of an hour or so each instead of the single four and a half hour set that Cline expected to have to perform, and when she gets it she is immediately ingratiated to the singer. It is a bold move by a fan who is still calling Cline “Ma’am” at the time, but it results in their shared friendship. Over coffee later at Louise’s home, Cline tells her of her difficult marriage and loneliness in “Three Cigarettes in an Ashtray” and “Crazy.” (This is one of Faulkner’s moments to shine, and she doesn’t disappoint.) Later, missing her own child while visiting Louise and hers, Cline sings “If I could See the World (Through the Eyes of a Child,” a tender lullaby of a number that showcases her motherly pain.

The overnight visit touches on Cline’s vulnerability, but most of the time we see her performing more upbeat numbers and Louise just having a grand time being a sudden part of her entourage. In one great sequence, she even picks a man from the audience to do an impromptu dance routine. (On opening night, she happened to pick someone who was a good dancer and who even added some swing dance moves that clearly caught her off guard.) At other times, she remains off to the side, dancing suggestively for the closer audience members. The joy Workentin exhibits here makes her character’s response to the plane crash even more poignant. A joyous encore number (“Bill Bailey”), though, re-establishes the mood that has prevailed throughout the play and leaves the audience clapping along and tapping toes.

It’s a wonderfully fun evening at the theatre, to be sure, though if you are not a fan of Cline’s music you certainly won’t like it much. (Why you’d even be there if you did not like the music, of course, is beyond me.) In addition to the set, lighting (Aimee Hanyszewski) and sound (Megan B. Henninger) are perfect and Leslie Vaglica clearly had some fun coming up with the costumes. Dan Kazemi’s three-piece band is a strong accompaniment to Faulkner’s Patsy Cline, and they even play small comic moments with her on occasion. This is a truly engaging production, certainly highlighting the magnitude of the loss that Cline’s death at thirty was to the music world. It’s still a jukebox musical, but its story (and Seger’s jubilant performance) lifts it above the norm. I can’t imagine anyone watching it and not having fun.

Always…Patsy Cline is now playing at Stackner Cabaret at Milwaukee Rep,108 East Wells Street in Milwaukee, until May 20. Performance times vary; check website . Tickets are available from Milwaukee Rep. Find more information about current plays on our Current Shows page and at theatreinchicago.com.