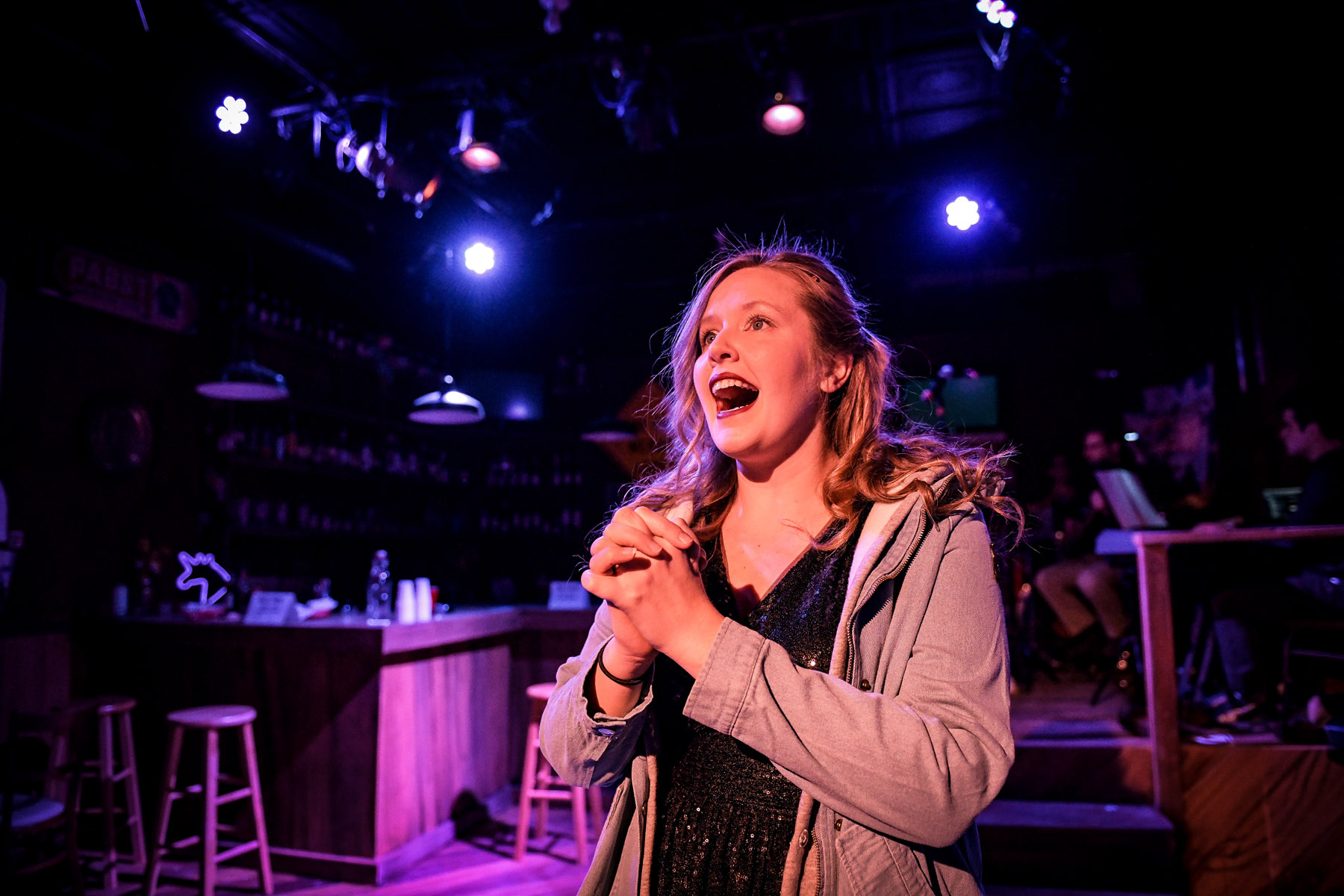 Think about what a musical means to you. Chances are you immediately thought of (possibly catchy) songs, interesting characters, and a story to tell. What you probably didn’t think is the sex-forward autobiography of a young woman from Indiana, but that’s what you find in Underscore Theatre’s Wife Material. It is the creation of Jamie Shriner, who boldly shows us the story of her own young life as a bisexual, sex-loving woman coming of age in conservative towns. The play is at once a bawdy, utterly risqué romp and a tender, poignant self-examination of a person who acknowledges her own flaws but who, as one memorable song puts it, loves herself. Shriner invites us into her life with no holds barred: from the start it is clear that we are not going to see some prettified self-portrait but rather an honest and emotional portrayal of life as it is lived.

The pop-flavored songs that make up the score are not always memorable (with the notable exceptions of “Almost Love,” “Cheater Cheater,” and the aforementioned  “I Love Myself”) and are mostly used for the practical purpose of storytelling. That, however, is not any kind of a problem for the show, as Shriner (aided by her standout two-person ensemble of Natalie Ray and Caitlin Dobbins) is a marvelous and unusually forthright entertainer who is, as she herself says during the how, an open book. There are simply no boundaries for this show, and it is absolutely not for children or for those who get squeamish about “raunchy” content. This is a solidly R-rated show and it pulls no punches whatsoever in discussing sexual politics, the sex act itself, masturbation, and the games people play in order to get into each other’s pants.

That being said, one might be excused for believing that the title of the show is tongue in cheek, but it isn’t. In fact, Shriner opens the show by telling us that, against all odds and her own understanding of herself, she actually married a man at age 24. The show, told in flashback, is an effort to work through how that event managed to happen. She clearly stunned herself by the sudden clarity of knowing a person she met was The One after a lifetime of just enjoying the fun, and (using Ray and Dobbins in a variety of roles) she goes back to make herself (and us) understand.

With Shriner’s bluntly honest, often extremely comic, discussion of her own life and sexuality, Kyra Leigh’s excellent music direction, and Dana Anderson’s brilliant direction, this is a show that can transform your understanding of what a musical can be. It is foul-mouthed and as sexually explicit as it can be without any nudity, but at the same time it has an enormous heart. We witness Shriner’s joys, pain, and confusion as she walks us through the journey of her young life, and because of that in ninety minutes we begin to feel that we know her: she’s a human being with all of the hopes and dreams of any other human being, perhaps with more flaws than some, but ultimately, like everyone, deserving of love. It takes guts to play out the excesses as well as the darkness in her life on a stage, but that in itself would not be a reason to like the play. Shriner herself is a reason, though, and she’s a darn good one.

Wife Material is an Underscore Theatre production now playing at 4609 N. Clark, Chicago, through Dec 9. Check the website for specific dates, times, and tickets. Find more information about current plays in our front page recs and at theatreinchicago.com.