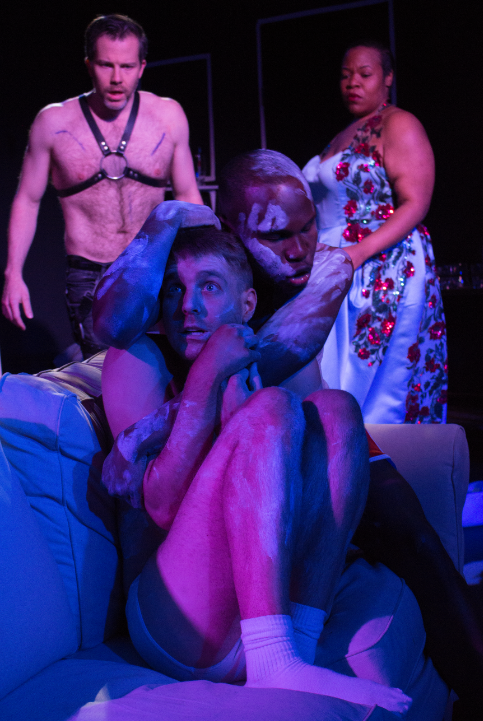 FDR said that “the only thing we have to fear is fear itself,” and he meant that to be comforting, but it overlooks the fact that fear can be a devastating thing. Fear is an emotion that really requires very little to make it grow. It can be engendered by almost anything and, once it has taken root, it feeds on itself, growing stronger and stronger the more we allow it to infect our minds. And under the influence of its poison we can retreat into our own isolated worlds where the fear has no outlet and just keeps getting worse. One of the most prevalent fears, especially in today’s world, is fear of “the other”: the notion that things that are unfamiliar are frightening and dangerous. That is what feeds the national dialogue about immigration and LGBTQ people, among other things: people fear what they do not understand. This fear lies at the core of Steve Yockey’s Wolves, now playing in an Exit 63 production at the Frontier. It’s a play that has plenty to recommend it including some strong performances, but ultimately it falls victim to its own short length (one hour, which doesn’t give things enough time to gel) and one key narrative decision by the author that simply doesn’t make sense.

In Wolves, unabated fear is the central fact of life for Ben, a young gay man who, as we are told repeatedly by the narrator, has recently moved from the smallest of towns to the biggest of cities and finds himself terrified of city existence. Prior to the play, he managed to find temporary love with Jack, who even moved in with him, but their love faded and the friendship left behind is not enough to stave off Ben’s intense fears. He likens the denizens of the city to wolves that prowl at night and want to kill. So when Jack wants to go out to a gay bar one night, Ben fears for his friend’s life…and his own: any opening could unwittingly bring one of the wolves to his door. Maybe that is why there is an ax hanging prominently on the wall of a tiny city apartment in defiance of all logic: he’s read Little Red Riding Hood a few too many times.

Terry Guest plays Ben, and he brings high energy into the role. His particular brand of terror manifests itself in frantic, high-speed dialogue that it is clear the character can barely control. His outbursts, however, seem contagious: even though Jack (Connor Baty) tries to take a more realistic approach to city living, he can never escape his roommate’s delusions. From the beginning, it’s easy to see that Baty’s character, try as he might, is not strong enough to fight Ben’s fears completely. When he goes out, he actually searches for someone “dangerous” to bring home to prove to both of them that the terror is groundless. Unfortunately, though, the man he brings home—whom he nicknames “Wolf” just to poke fun at Ben’s nervousness—just pushes Ben further into the very dark territory of his own mind. Eric Lindahl as Wolf enters the apartment looking for a sweet tryst, but is very capable of acquiescing to Jack’s growing apprehension about what he is doing by playing the aggressor, a decision that makes him appear even more the animal to the watching Ben.

Through all of this tension, Alexandria Mormon’s narrator keeps cutting in with commentary that is at times merely narrative and at other times sharp and funny. As the teller of the story, she is at least nominally “in control,” and—though she does interact with the characters directly at times—maintains enough distance to allow them to make their own decisions. Mormon is a friendly, down-to-earth presence in this brief little tale of horror, as well as a breath of fresh air when things get too intense. But even an omniscient narrator can’t keep the darkness out of a disturbed mind.

Derek Van Barham, who makes excellent use of G. Max Maxin IV’s lighting scheme, directs with a nod toward the violence inherent in the situation. He guides his actors to moments where each of them can explore their characters as much as possible, and he does what he can to allow the story to progress organically toward its uncomfortable denouement, but Yorkey’s script binds him: in the end all he can do is let the absurd, undermotivated action play out with the use of that terrifically inappropriate ax. Still, the play does bill itself as a “predatory fairy tale,” so maybe looking for logic in it is what is really inappropriate. Even the narrator tells us not to look for morals. So what we have is a very well-acted, quite unusual little piece that might have worked better if Yorkey had given it more room to allow more three-dimensional character development instead of pointing to an ending and getting there as fast as he could.

Wolves is an Exit 63 Theatre production now playing at the Frontier, 1108 W. Thorndale, Chicago through June 2. Check the website for specific dates, times, and tickets. Find more information about current plays in our front page recs and at theatreinchicago.com.