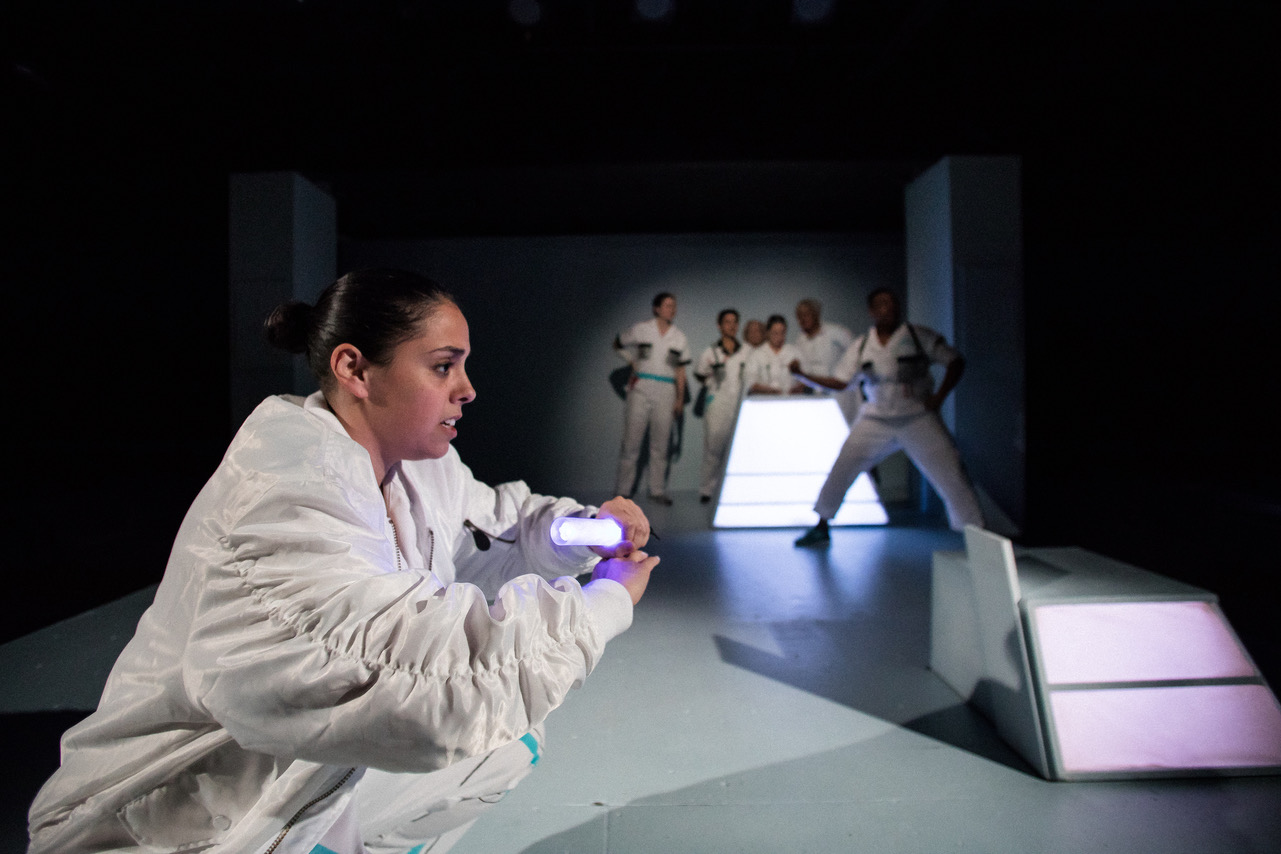 When Babes With Blades’ Women in 4G begins, it feels like a fairly normal murder mystery, albeit set in a spaceship orbiting Mars: the captain, who happens to be the only male aboard the small vessel, is killed, and the women of the crew are left to wonder who among them is a murderer. And if this were a different play, I’d have just summarized the plot. But playwright Amy Tofte has a few other ideas up her sleeve, and we actually discover the answer to the “mystery” before intermission, leaving plenty of time to develop those other matters, which have to do with female empowerment, trust, climate change, and a couple of huge secrets relating to the mission. It’s a highly unusual, if rather uneven, piece, and director Lauren Katz and her ensemble do an admirable job of seeing it through, even if they are not 100% successful.

Government Vessel 4G’s mission, at least as far as most of the crew knows, is pretty direct, though by no means easy: they are to fly to the huge communications satellite EON468 invented by Wollman (Jazmin Corona) and upload what First Officer Stark (Ashley Yates) calls “a simple data drop and upload to jump-start the (satellite’s) program.” Due to the relative masses of the ship and satellite, they will have to accomplish this by means of a risky space walk. EON is located in orbit around Mars for reasons that are never precisely made clear, so that is where the 4G goes. Its secret mission, though, is far more important than a communications data drop.

After the captain’s untimely death, though, there is a protocol to follow: abort the mission and head home. Failure to adhere to this protocol, we are told, will result in the entire crew being disciplined. The fact that this seems on its surface to make little sense when the ship is a scant six hours from completing a mission that can only be done within a very brief window of opportunity is perhaps a frustrating example of the oxymoron “military intelligence.” Still, Stark makes the decision according to the book: despite the objections of Wollman and others, they will go home. It would surprise me, though, to find a single audience member who actually believed that is what would end up happening. And that’s pretty much all I can say without giving away some things that are best left for the audience to discover.

Tofte’s script, which contains the expected amount of science fiction technobabble, certainly has plenty of twists and turns as serious arguments and even fights break out among crew members while things continue to go wrong with the ship. (Kudos to fight director Maureen Yasko.) Some of these feel a little artificial and/or result in fairly talk-heavy moments, including the exposition scene, which I found to be very awkwardly constructed. Still, for the most part they work reasonably well, even though Act Two contains such an enormous plot shift that the play, which had been moving from Big Moment to Big Moment, becomes highly internalized.

The ensemble, which also includes Jillian Leff, LaKecia Harris, Catherine Dvorak, Renee Lockett and Judi Schindler, handles these shifts adeptly, building various locations around the ship through the simple expedient of rearranging the three items of furnishing that adorn the stage and creating some strong moments of individual characterization within a fairly plot-heavy play. Harris and Dvorak play astronauts who get on each other’s nerves from the start. Lockett and Schindler play two ship’s doctors (though why a crew of eight requires two doctors is beyond me) and manage to differentiate them nicely. Leff is a green ensign on her first major mission. And Yates and Corona round out a solid ensemble with the stoic First Officer and the argumentative mathematician whose invention has brought them out here in the first place. Director Katz maintains careful control and a good pace throughout, but she also invents a repeated series of odd interpretive dance-like movements that appear to have leapt out of “The OA” and onto the stage. They seem to have something to do with preparing the crew to do the upload, but they lack any real context and don’t really make a lot of sense.

Ultimately, this play is a mixed bag. It has some solid performances and a well-conceived plot, though there are several fairly slow-moving scenes as well. It has a strong design team, too (lights by Gabrielle Strong, sound by Hannah Foerschler, set by Jessica Baldinger, costumes by Elle Erickson). Still, there are some decisions here that left me confused (and I’m not only talking about those bizarre dance moves), starting with the fact that an autopsy of the captain’s body is conducted while he is still in a body bag. (The script calls for a kind of holographic autopsy, but Tofte should have added lines clarifying what is going on, given the fact that she had to know that it’s completely impossible, with today’s technology, to portray it. As it is, the whole autopsy scene is confusing and odd, and it pulled me right out of the moment.) I’m glad I saw this play; Babes With Blades is always a fine company and there is a lot here to leave you pondering. I wish, though, that I liked it a bit more.

Women of 4G is a Babes With Blades production now playing at the Factory Theatre, 1623 W. Howard St, Chicago through Sep 14. Check the website for specific dates, times, and tickets. Find more information about current plays in our front page recs and at theatreinchicago.com.